Last year the Government of Kenya was getting “ready” for REDD in the Embobut Forest, now it is violently evicting the Sengwer People and forcing them “into extinction.” According to Survival International, “as many as a thousand homes have already been torched.”[i]

Sengwer spokesman Yator Kiptum denounced the “disaster” caused by combined force of the Kenya Forest Service and Administration Police, a paramilitary unit of the police, which is now evicting the Sengwer not just from the Embobut Forest but from the entirety of the Cherangany Hills, destroying property and burning homes. “The government of Kenya is forcing us into extinction,” he said.[ii]

According to Forest Peoples Programme, the Sengwer are not squatters. “The Sengwer have their rights to their ancestral forest lands enshrined in the Constitution and international law.” [v] The Sengwer obtained court orders to prevent further evictions to no avail.

Inspector Stephene Chessa who works for the Kenya Forest Service and is in charge of the Embobut evictions, denied anyone had been evicted by force. According to Mr. Chessa, the presence of the security forces is to ensure that the process is smooth.[vi] Funders of the Kenya Forest Service include the World Bank and the government of Finland.[vii] 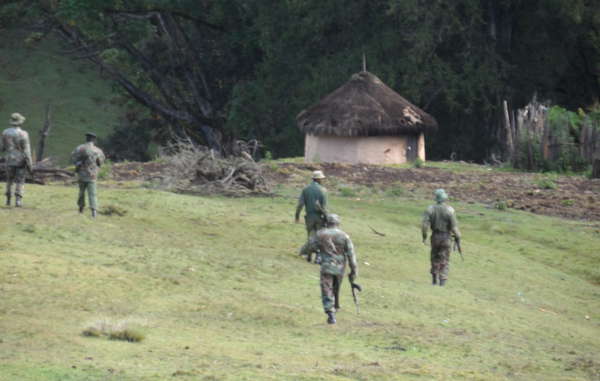 Forest guards arrive in Kenya’s Embobut Forest in preparation for the evictions. © FPP

According its Inspection Panel report No. 77959-KE, the World Bank was “financing REDD+ readiness activities” as part of this program. As of last May, activities started include: “Identification of Grazing Systems as a REDD+ Strategy Option [and] Development of a Methodology for Monitoring Community Engagement in Forest Management and REDD+.”[ix]  REDD (Reducing Emissions from Deforestation and Degradation) is a carbon offset mechanism that uses forests and land as sponges for Northern pollution.[x]

Solomon Mibei, Head of Conservation at Kenya Forest Service (KFS), said that “At the moment, the KFS is conducting workshops with communities living around the Embobut forest and the Kakamega forest to educate them on carbon financing.”[xi] 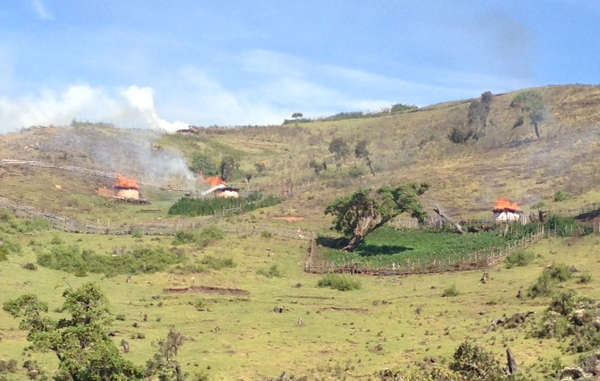 However, according to Forest Peoples Programme, KFS does not have a good track record protecting forests. “…when the KFS is in control then indigenous forest is fast destroyed, as profit-making plantations and agriculture replace the biodiversity of the indigenous forest.”[xii]

Possible partners for eventually doing REDD in Kenya include the Africa Development Bank, which is already working with communities on “forest conservation” exchange programs through a programme known as Green Zones Development Support Project (GZDSP).[xiii] Toyota[xiv] and Coca-Cola[xv] may also be prospective partners.

Last year, Sengwer representatives denounced previous KFS evictions in 2007, 2008, 2009, 2010 and 2011 as well as the alleged shooting of the Sengwer woman Mrs. Beatrice Chepkorir in The Cherangany Hills Project Operation area of the World Bank-funded Natural Resources Management Project.[xvi] The Sengwer representatives also demanded that the Bank suspend funding for REDD+ until these injustices are addressed.[xvii]

This is not the first time in Kenya that Indigenous People suffer violent evictions from their ancestral territory that is slated for REDD. “The Mau Forest was made “ready” for UNEP-funded REDD with violent evictions of the Indigenous Ogiek People,” which threaten their cultural survival.[xviii] A landmark ruling on these evictions is expected to be handed down by the African Court this year.

The evictions of the Sengwer join the growing roster of land grabs and grave human rights violations caused by REDD ‘readyness” initiatives and forest carbon projects, which also include persecution, imprisonment, and killing.[xix] The evictions of the Sengwer may also confirm Friends of the Earth International’s concern that REDD could “foster an ‘armed protection’ mentality that could lead to the displacement of millions of forest-dependent people, including by force.”[xx]

“A false solution to climate change, REDD+ is emerging as a new form of colonialism, economic subjugation and a driver of land grabs so massive that they may constitute a continent grab. We must defend the continent from carbon colonialism,” declares the No REDD in Africa Network.

Even the United Nations admits that REDD+ could result in the “lock-up of forests,” “loss of land,” “conflict over resources,” “new risks for the poor” and “marginalize the landless.”[xxi]

There has been some debate as to whether REDD could potentially cause cultural genocide.[xxii] The evictions of the Sengwer People indicate that it very well may.

[xviii] The Worse REDD-type Projects in Africa: Continent Grab for Carbon Colonialism , No REDD in Africa Network,  http://no-redd-africa.org/index.php/16-redd-players/84-the-worst-redd-type-projects-in-africa-continent-grab-for-carbon-colonialism
[xix] Ibid and A Dozen of the Worst REDD-type Projects, Carbon Trade Watch,  http://www.ienearth.org/docs/REDD-A%20Dozen-of-the-Worst-REDD-type-projects.pdf
[xx] Friends of the Earth International, REDD: Critical questions and myths exposed,, Summary www.foei.org/publications
[xxi] UN-REDD Framework Document, http://www.undp.org/mdtf/UN-REDD/docs/Annex-A-Framework-Docoment.pdf , p. 4-5 A Poverty Environment Partnership (PEP) Policy Brief, Based on the report “Making REDD Work for the Poor”, (Peskett et al, 2008) http://www.povertyenvironment.net/pep/ PEP includes UNDP, UNEP, IUCN, OCI, SIDA, ADB, DFID, WCMC
[xxii] Launch of No REDD in Africa Network: “REDD could cause genocide.”
“In 1948, the United Nations approved the Convention on the Prevention and Punishment of the Crime of Genocide, which defines genocide as follows: ‘genocide means any of the following acts committed with intent to destroy, in whole or in part, a national, ethnical, racial or religious group, as such:
(a) Killing members of the group;
(b) Causing serious bodily or mental harm to members of the group;
(c) Deliberately inflicting on the group conditions of life calculated to bring about its physical destruction in whole or in part;
(d) Imposing measures intended to prevent births within the group;
(e) Forcibly transferring children of the group to another group.’

Does this definition apply to REDD? Potentially, it does. REDD could  involve a vast area of land (theoretically covering the area of forest land – including large areas of agricultural land – in the global south). The rights to the use of that land could  be taken away from Indigenous Peoples who depend on their forests for their livelihoods. Destroying livelihoods on this scale could  conform to the parts (a), (b), and (c) of the definition of genocide, above.”

Without a doubt, the massive evictions and burning of their homes are causing the Sengwer People mental harm, and, thus, conforming to criteria (b) of genocide.