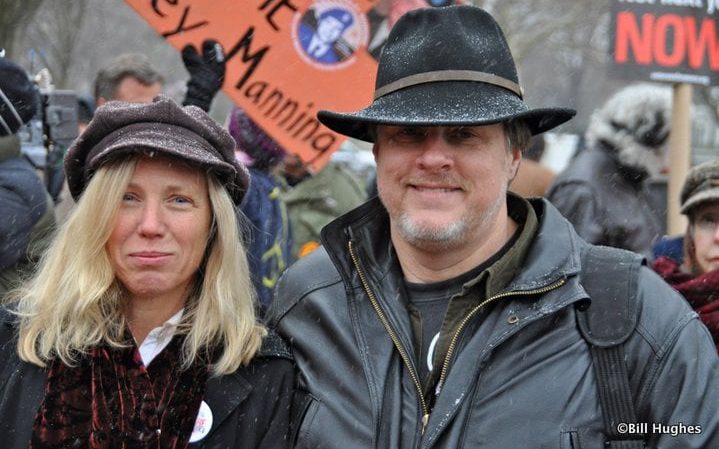 The anti-imperialist and anti-war movement suffered a great loss Sept. 6 with the sudden death of activist Kevin Zeese, 64, at his home in Baltimore, Md.

In summer 2019 Kevin Zeese and his life-partner Margaret Flowers led resistance as part of the Embassy Protection Collective, which stayed in the Venezuelan Embassy in Washington, D.C., after the Venezuelan Ambassador was forced to leave. The collective was subjected to 37 days of constant right-wing attack.

Zeese was co-director with Flowers of Popular Resistance, an independent news website, which challenges U.S. imperialist propaganda, military threats and deadly sanctions against Venezuela, Nicaragua, China, Russia, Palestine, Cuba, Syria and Belarus. The organization is in full solidarity with the Black Lives Matter movement and every social justice movement in the U.S.

Zeese, along with Flowers, was a consistent unifying force on the United National Antiwar Coalition and its Administrative Committee, organizing the UNAC conference in February, and leading the Sanctions Kill Campaign, No Foreign Bases Coalition, Hands Off Syria Coalition and many other campaigns. Several chapters by these two leaders are included in the book, “Capitalism on a Ventilator: The Impact of COVID-19 on China and the U.S.”

Margaret Flowers reflected on how “. . . amazing, kind and selfless a person Kevin was. He never asked for anything, but was always there for others. He had such great knowledge and wisdom. He was a gentle giant, and his death is a huge loss for me personally and for the many people who are a friend or who worked with him over the years.”

All those who knew Kevin Zeese, his work and his determination to breathe confidence, resistance and solidarity into the movement, are deeply saddened by his passing. We extend our love and confidence to Margaret Flowers. We can best remember Kevin Zeese by our determination to organize and resist at the center of the U.S. empire. — By Sara Flounders for Workers World Party

A virtual memorial for Kevin Zeese will be held Sept 19. To register go to: bit.ly/KevinZeese

The following is the slightly edited version of a talk given at the Aug. 30 UNAC-sponsored online rally, “After the DNC and RNC: We Can’t Breathe!”

Power to the people! We have the power to change if we stay united. We have incredible opportunity now. We see the movement’s growing, especially after the Democratic National Convention and Republican National Convention. The conventions showed us that those parties do not represent the people and that our power is not in elections. Our power is in building people power — and we see that happening.

We need to build power, so that in 2021 people can rule from below. So that we can call general strikes. So we can stop business as usual. That is the only way change will occur. It will not come from Joe Biden or Donald Trump. It will come from the people.

We also have to understand — and it’s often very hard for people to understand — that the only path to success is failure. We fail and fail and fail until we win. But every time we try, we build the movement. And we get stronger. We can never tell how close we are to success. It’s like we’re banging on a wall, pounding and pounding, and it’s not until that wall begins to crack and we start to see the light come through that we realize we’re getting close to that breakthrough moment when change can occur.

We see the 2020s as a decade of transformation. The movements have been growing since Occupy in 2011,  then the Black Lives Matter movement, Fight For 15 — all during the Obama era – and now the growing of the movements during the Trump era. We see the 2020s as a decade of social transformation. In order to have that transformation, we need to be organized and educated . . . It’s normal for us to not always be on a linear path to success. It’s a jagged path. We move up and down, we get stronger.

We all know that Donald Trump is terrible. The worst president of my life! His overt racism; his open support for violent white supremacists; his mishandling of the COVID-19 virus, causing more than 180,000 deaths so far and probably more than 200,000 by the time of the election; his poor response to the economic collapse. He’s leading us into another Great Depression, and he constantly puts in place laws for the wealthy — while poverty, homelessness, debt and joblessness increase.

Later in his career Biden became chair of the Senate Foreign Relations Committee and led in not just voting for the Iraq War, but in the effort to make the Iraq War happen. As chair of Foreign Relations, he put in place massive military budgets, bloated corrupt budgets, while leading us into war after war. When it came to student bankruptcy, he led the effort to make it so students can’t get rid of student debt even in bankruptcy. Now he’s even calling for cutting Social Security when we should be doubling or even tripling Social Security payments.

We all have the power to vote for what we believe in, for candidates [who] reflect the movement. There are many more choices than a few corrupt candidates of the millionaires. And we need to use what little power we have in the elections to send a message of what we are for, to show that those who speak for movement issues get the movement’s support. After we vote, we must build people power, so that people can rule from below.

We must build people power, so that no matter who’s in office, we can stop the government from operating. We can make the country ungovernable. We can put in place general strikes, so that our demands are heard and met. That is how we will win.