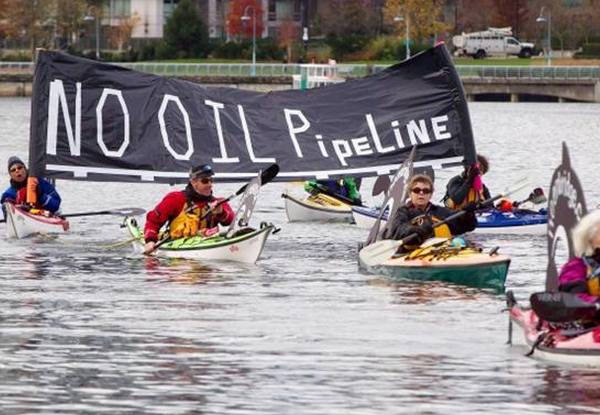 Keystone Off The Table, But Back East, Pipeline Fight Builds

ROCKY MOUNT, Va. — Carolyn and Ian Reilly and their four children left Florida’s sprawl in 2010 to farm 58 acres in rural Virginia, raising beef cattle, chicken and hogs. Then a year ago, they learned a natural gas pipeline would slice through part of their farm and their lives took another dramatic turn.

They’ve shooed pipeline surveyors from their pastures, made anti-pipeline signs for a protest at the county courthouse and at appearances by the Virginia governor. They’ve also kept up pressure on local officials.

As the leader in this multigenerational band of family activists, Carolyn Reilly has found the experience exhilarating and bruising.

From New England to North Carolina, scattered insurgencies have formed in opposition to a spider web of pipelines up and down the Eastern Seaboard as the nation’s energy industry seeks to move pent-up natural gas supplies.

Behind the pipeline boom: vast deposits of natural gas being drilled in West Virginia, Pennsylvania and Ohio and ready for shipment to U.S. and international markets.

The battle has emerged as the East Coast version of the environmental and political drama over the Keystone XL Pipeline, which became a line in the sand for environmentalists who argue the time has passed for the world to end reliance on fossil fuels. With President Barack Obama killing that 1,179-mile energy project Friday, the snarl of proposed pipelines carrying natural gas is likely to generate more attention — from proponents and opponents alike.

The Reillys joined this fight in October 2014 when a letter arrived advising them that the proposed route of the Mountain Valley Pipeline would cross two creeks and a tangle of prized pasture land on their Four Corners Farm in the foothills of the Blue Ridge Mountains. The $3.2 billion pipeline would stretch 300 miles from Wetzel County, West Virginia, to Southside Virginia.

At first, the letter didn’t register.

“I mean I was just completely ignorant and I was really hesitant to respond to this,” Carolyn said. But she soon discovered what the letter signified, and her activism kicked in. “Within a day, I was connected with other people who were forming a resistance.”

But with a strong measure of political support, energy companies have responded with their own media campaigns. They are promoting natural gas as an abundant, cheaper and cleaner fuel than that from dirty coal generation. They say pipeline construction will create thousands of jobs, increased tax revenues and robust economic development.

They also argue they have been mindful of objections as they consider thousands of miles of routes. Along the way they’ve offered hundreds of adjustments — including burrowing into a Virginia mountain to sidestep the habitat of a threatened salamander.

But opponents are unmoved, and they’re vowing to crimp those lines through grass-roots activism.

Seated around a table and bowls of a hearty soup made from their farm-bred chickens, the Reillys represent virtually every point of view of pipeline opponents.

Ian resents the taking of land through eminent domain and the damage from carving routes through forests, mountains and streams. Carolyn objects primarily for climate change reasons, while her father, Dave Werner, is a retired commercial banker who doesn’t buy the touted jobs and economic benefits.

All said they’re committed to this battle, including civil disobedience.

“If we have to, we’ll chain ourselves to trees — we’ll do whatever we need to in order to stop or slow down the process,” Ian Reilly said.

Carolyn Reilly has enlisted her children, ages 6 to 15, to draw signs and attend protests. She has filed public records requests with county officials to ensure the community is fully informed; and joined other activists in North Carolina for training on environmental activism. Her oldest, Jonas, has stood guard, watching for surveying teams.

The anti-pipeline movement feeds in part on anti-fracking protests long aimed at the drilling practice that opened up access to natural gas in deep shale formations in such places as Ohio, West Virginia and Pennsylvania.

Some simply don’t want energy drawn from the earth.

“In recent years, more and more environmental groups are using pipelines almost as a proxy war, whether it’s natural gas or they just don’t like fossil fuels,” said Cathy Landry, a spokeswoman for the Interstate Natural Gas Association of America.

Virginia has become an epicenter of the anti-pipeline movement because of two massive projects and others in the works.

Besides Mountain Valley, Dominion Resources and its energy partners, including Duke Energy, have proposed a $5.1 billion Atlantic Coast Pipeline that would deliver natural gas from West Virginia to North Carolina, traveling through some stretches of fragile environments over its 564-mile route.

The Allegheny-Blue Ridge Alliance is a coalition of more than three dozen organizations in Virginia and West Virginia opposed to the pipeline’s possible path through two national forests, among other natural attractions.

“Energy is indeed important and energy is important in creating new jobs. I get that,” said Lewis Freeman, a spokesman for the alliance. “But that does not mean the value of energy to our economy trumps all other values. I think what’s at stake here is a conflict of values.”

As for concerns another fossil fuel simply adds to the planet’s climate woes, the energy industry counters that the U.S. isn’t anywhere near to fully moving into solar, wind or other alternatives. They cast natural gas as a bridge fuel away from coal, which is being phased out by utilities to meet new federal rules to reduce carbon emissions.

Carr, the West Virginia geologist, said the current energy options are imported oil, natural gas or coal, with wind and solar still decades away from filling the gap.

“Those are your choices,” he said. “Or maybe you don’t want your lights turned on.”