Above Photo: Pipeline protesters may be making their way back to the White House after Donald Trump’s latest actions seeking to revive the Keystone XL and Dakota Access. Credit: Getty Images

The Keystone XL tar sands pipeline and the Dakota Access pipeline had become litmus tests of President Obama’s commitment to the fight against climate change as each project galvanized widespread grassroots opposition. Disputes over them had also created a bitter split over fossil fuel development that sharply divided Democrats from Republicans.

Trump’s actions, called presidential memoranda and signaled throughout his campaign, may revive the projects’ fortunes, but they also may further galvanize environmental forces. Activists are coming to grips with a broad assault against climate activism in favor of unfettered development of fossil fuels.

The memoranda, which White House officials said would be published later on the White House website but were not immediately released seek to advance construction of the Keystone XL and Dakota Access pipelines, according to the Associated Press. Trump invited the Canadian pipeline company TransCanada to re-apply for a permit for the pipeline that would carry approximately 800,000 barrels of oil per day from the Alberta tar sands in Canada to Steele City, Neb., where it would connect to existing pipe en route to refineries in Texas. The Dakota Access pipeline would ship roughly half a million barrels of oil per day from the Bakken oil fields of North Dakota to a transfer facility in Illinois.

At his daily press briefing, White House spokesman Sean Spicer explained that Trump wanted “the best possible deal for the American taxpayer. But he also said that among the conditions sought on both pipelines—and on future projects—might be requirements that they be built with American steel. The Dakota pipeline, however, is almost finished.

The Standing Rock tribe won a major victory against the builder of the $3.8 billion pipeline, Energy Transfer Partners, on Dec. 4 when the U.S. Army Corps of Engineers called for a more complete environmental analysis. Such an analysis would typically take a year or more to complete and could result in rerouting the pipeline. 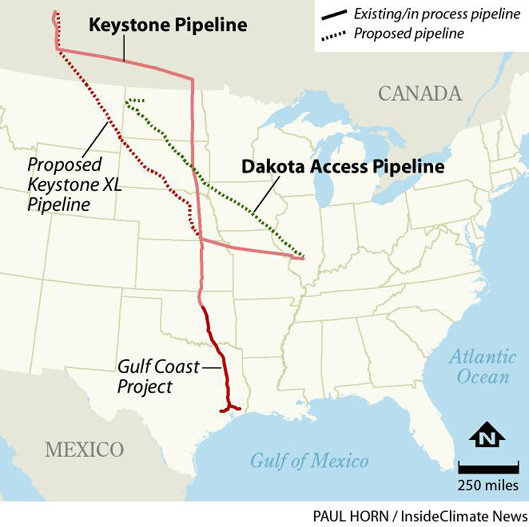 The high-profile Keystone XL pipeline, was canceled in November 2015 by President Barack Obama after years of deliberation.

Obama said at the time that the pipeline was not in the national interest, that it would not provide a significant number of jobs, nor would it lower energy prices and the climate risks were too great.

The economics for finishing the Dakota Access pipeline are more favorable as the pipeline is already more than 90 percent complete. Industry heavyweights Marathon Petroleum Corporation and Enbridge Energy Partners, however, held off on the purchase of a $2 billion stake in the pipeline in December. That decision was made after it became clear that the pipeline would not be completed by the Energy Transfer Partners’ deadline with oil producers to deliver oil by January 1.

Trump owned $500,000 to $1 million in Energy Transfer Partners stock in May 2015, an investment that dropped to less than $50,000 in the summer of 2016, according to financial disclosures. A Trump spokesperson said he has since sold all stock in the company.

Native American leaders condemned the actions, including Dave Archambault II, chairman of the Standing Rock tribe that led the successful opposition to Dakota Access, which would cross the Missouri River a half-mile upstream of that reservation. He compared the pipeline’s threat to the tribe’s water to the water contamination in Flint, Mich.

“Creating a second Flint does not make America great again,” Archambault said. “It not only violates the law, but it violates tribal treaties. Nothing will deter us from our fight for clean water. We will be taking legal action, and will take this fight head on.”

“Donald Trump has been in office for four days and he’s already proving to be the dangerous threat to our climate we feared he would be,” Sierra Club executive director Michael Brune said. “Simply put, Donald Trump is who we thought he is: a person who will sell off Americans’ property and Tribal rights, clean air, and safe water to corporate polluters.”

“No amount of ‘alternative facts’ can change the reality that these dirty and dangerous pipelines are a bad deal for clean air, safe drinking water and the communities living along the routes,” League of Conservation Voters senior vice president for government affairs Tiernan Sittenfeld said in a statement.

“Critical infrastructure projects like Keystone XL and Dakota Access will bring much-needed crude oil to markets, which will help create the fuel, power, and products that Americans use every day,” Consumer Energy Alliance president David Holt said in a statement.

TransCanada, the company behind the Keystone XL pipeline, said it appreciates Trump’s invitation to re-apply for a permit for the pipeline. “We are currently preparing the application and intend to do so,” TransCanada spokesperson Terry Cunha said, and then repeated the company’s contention that “KXL creates thousands of well-paying construction jobs and would generate tens of millions of dollars in annual property taxes to counties along the route as well as more than $3 billion to the U.S. GDP.”

Some, however, questioned the ability of an executive action to approve either pipeline.

“This does not mean Keystone will be built,” said Kenny Bruno an activist with the New Venture Fund. “There are many obstacles to it and we don’t believe it will be built anytime soon.”

“Some people think it’s a matter of snapping fingers, [but] the courts don’t work that way,” said Pat Parenteau, a professor at Vermont Law School about the Dakota Access pipeline. “There has to be a bona fide, legitimate reason why not proceeding with the assessment that just a month ago the United States Government said in court was necessary in order to comply with the law. Why all of the sudden is it not?”