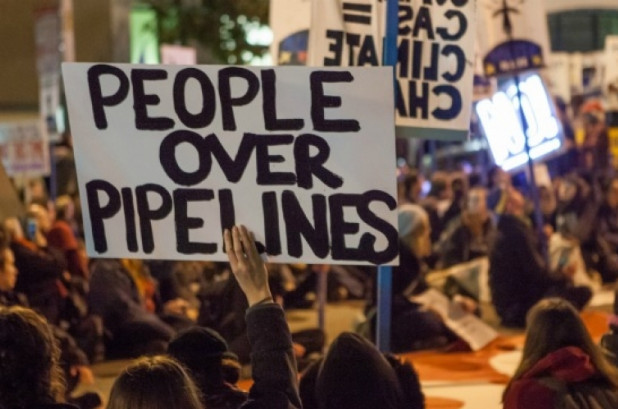 Above Photo: “We will fight back through through the courts, protests, and any means available and necessary,” says Eriel Deranger of the Athabasca Chippewayan First Nation. (Photo: Pax Ahimsa Gethen/flickr/cc)

…’On A Scale Never Seen’

With his order to revive the Keystone XL (KXL) pipeline, President Donald Trump “has declared war on Indigenous nations across the country,” one Cheyenne River Sioux organizer said Monday.

But he’ll be met by a fierce native resistance movement that “will not back down,” said the organizer, Joye Braun, on a press call organized by the Indigenous Environmental Movement (IEN).

Trump signed executive orders last week advancing the controversial KXL and Dakota Access (DAPL) pipelines, prompting widespread outrage and vows of bold resistance from the Indigenous activists, climate campaigners, and countless others who have fought against both projects. What that opposition will look like came into sharper focus on Monday.

A press release from his organization confirmed that Indigenous groups are “organizing spiritual camps to resist the Keystone XL pipeline up and down the pipeline route, in addition to reviving the Standing Rock camp” which sprang out of resistance to DAPL and at its height housed thousands of protesters.

Eriel Deranger of the Athabasca Chippewayan First Nation added: “My nation is not taking Donald Trump’s new memorandum on Keystone XL lightly—we will fight back through through the courts, protests, and any means available and necessary.”

Following Trump’s orders last week, IEN vowed to launch a “massive mobilization and civil disobedience on a scale never seen of a newly seated president of the United States.” Or perhaps of any president who’s ever faced an anti-pipeline protest.

Business Insider broke down Trump’s assertion that reviving Keystone would create a “lot of jobs, 28,000 jobs, great construction jobs.” The outlet noted that “like many of the numbers the administration has thrown out in its early days, it’s unclear how the president arrived at that estimate.”

The Final Supplemental Environmental Impact Statement for the project, which was published by the State Department in January 2014, lays out a projected overview of economic activities related to the construction and operation of the pipeline. The project would create approximately 3,900 construction jobs in Montana, South Dakota, Nebraska, and Kansas during the one or two years it takes to build the pipeline, the report suggests.

That number is seven times less than the one Trump suggested earlier today, though it’s possible the president was including other types of jobs the pipeline construction could create. In total, the report estimates that the firms that get awarded contracts for goods and services (including the construction) would add 16,100 jobs. Those people in turn could create another 26,000 jobs depending on how they spend their wages—a phenomenon the report calls “indirect and induced spending.”

However, none of those numbers match the one Trump used, and the report defines the term “job” as one position that is filled for one year.

And Reuters reported Monday, “U.S. steelmakers will receive negligible benefit from the multi-billion dollar Keystone XL project…because they have limited ability to meet the stringent materials requirements for the TransCanada line.”

As Rep. Raúl Grijalva wrote in an op-ed last week, “Not only will these pipelines not create the jobs President Trump needs to fulfill his extravagant promises—the state department formally estimated that Keystone XL, which also faced considerable Native American objections, will create only 35 permanent positions—they will harm his relationships with Indian Country and lead to more of the widespread protests he clearly despises.”