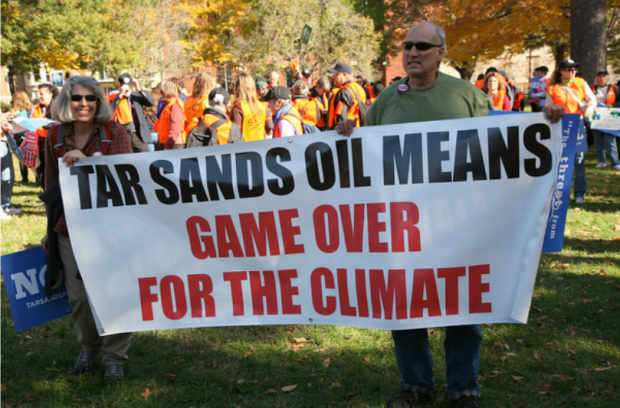 The Nebraska Public Service Commission (PSC) voted to give TransCanada permission to build the northern leg of the controversial Keystone XL (KXL) pipeline on November 21, yet opponents are heralding the decision as a victory. The Commission’s 3-2 vote approved an alternate route rather than TransCanada’s preferred one, a move which pipeline fighters say could set back the project at least three years and possibly up to as many as five years.

The KXL pipeline northern leg is intended to transport tar sands from Alberta tar pits to refineries in Texas where it would be exported to Asia. Opponents have argued that in addition to tar sands being one of the most dirty types of fossil energy sources, the pipeline would be a major climate change contributor, and risk contaminating the Ogallala aquifer, an agricultural and drinking water source for over 2 million people across nine states.

TransCanada has been challenged at each stage by opponents since it first applied for the permit to build the northern leg of the KXL pipeline. Project opponents include hundreds of land owners, indigenous people, environmentalists, and green groups, which launched a massive nationwide campaign against it in 2010. And with this vote they believe there is a good chance the project can be stopped altogether because construction will be delayed even longer.

Art Tanderup, a farmer from Neligh, Neb., whose property would be directly impacted by the KXL, said that the Nebraska PSC decision will force TransCanada to relocate four pump stations. That means additional delays for new environmental impact studies, land purchases, and new permits for power line infrastructure to run the stations in rural areas where high capacity power lines are hard to come by. “Each pump station takes 320,000 kilowatts per day, and the electrical infrastructure is not going to be there,” he said.

There will also be more legal battles brought by a new set of landowners who did not know they would be on the main alternate route to the KXL until PSC relocated it. “TransCanada is going to have all these landowners that were not involved in the State Department process, and now they’re going to have to deal with them,” he said.

These landowners will no doubt be challenging the decision which was issued before they had been notified of the alternate route and given an opportunity to weigh in on the process. This will add more legal difficulties for TransCanada, according to Tanderup.

The campaign against the KXL pipeline has been a roller coaster ride of victories and defeats over the past eight years, but pipeline fighters, as they call themselves, have refused to quit. Their battle has continued unabated since 2010 when TransCanada filed for the first permits to build KXL. The project was considered dead in November 2015 when President Obama rejected the final State Department permits to build it.

The State Department was a determining factor in the KXL permitting process because the proposed pipeline route crosses the border with Canada. But once Obama left office, the Trump Administration almost immediately reversed his executive order rejecting the project. This opened the way for reconsideration by the Nebraska Public Service Commission.

As a Nebraskan farmer, Tanderup has forged close bonds with indigenous people of the North Ponca Nation, working “shoulder to shoulder” with them to fight the KXL for over five years. They gifted him sacred Ponca corn which he has grown and harvested on his farm. He refers to them as “relatives” and has come to understand firsthand their struggle with land rights. He helped organize the Cowboy Indian Alliance which worked together with indigenous people of the region and the landowners affected by the KXL. They held a week-long rally in Washington, DC in April 2014 to pressure Obama to reject it.

Tanderup has also pulled off several spectacular events at his farm as well, inviting an artist to create the largest ever crop art in his corn field and later hosting a once-in-a-lifetime concert featuring Neil Young and Willie Nelson, which drew over 5,000 people.

The KXL route will cut through three acres of his farm. It will also pass next to the North Ponca reservation and cross the Ponca Trail of Tears, land they consider sacred.

Tanderup is concerned about the many landowners who were forced under eminent domain to cede land to TransCanada. They have battled with TransCanada over court costs they incurred from the long fight. And although every court decision has been in its favor, TransCanada continues appealing and the case will go before the Nebraska Supreme Court sometime next year.

The key to the success in stopping the KXL thus far has been a strategy of delaying it, costing TransCanada time and additional expenses in the battle. The delays have caused some investors to get cold feet on supporting it. “They’ve got a lot of challenges ahead besides all the court challenges. The big question is can they get the money to build?”

Jane Kleeb, chairperson of the Nebraska Democratic Party and founder of Bold Nebraska, believes the PSC decision was a major setback for TransCanada because of limited financial support for the project, delays, and doubts that it can be completed. “TransCanada is already on razor-thin margins,” said Kleeb.

Kleeb also believes there is a possibility that TransCanada may back out of the project altogether. “In 30-60 days they could tell the PSC they are no longer moving forward on the plans for KXL,” she said. “TransCanada clearly was not celebrating and popping champagne because they know they’ve got to get this route reviewed by the State Department.”

Kleeb also said that mainstream media has erred in characterizing the PSC vote as a defeat for KXL opposition. Had the PSC denied the project, TransCanada would be able to appeal it, which would put the decision in the hands of one judge. Such a scenario would be far less desirable, in their view, since one individual could allow proceed as-is, resulting in no significant delay.

Another key aspect to the PSC decision is that while the KXL project is delayed further, other energy sources such as wind and solar continue to see a price drops, making them much more competitive with fossil energy sources. 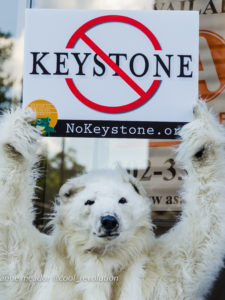 According to Scientific American, the price of solar power had dropped nearly 43% between 2010 and 2015, from $7 to about $4 per KW/h. And the 2010 costs are expected to plummet 75% by 2020, while capacity will increase 400%, according the Lawrence Berkeley National Laboratory. This is projected to happen before TransCanada finishes the KXL alternate main route construction.

The KXL opposition has grown savvy as it has learned the ropes on how to fight TransCanada. The collective tenacity of the pipeline fighters has carried them through hundreds of organized meetings, protests, thousands of arrests, court appearances, and given them the experience they need to continue the KXL battle, which is about to start its ninth year.

Tanderup remains committed to fighting KXL until it is defeated. “I know a hell of a lot more about it now than I did when we started,” he said.