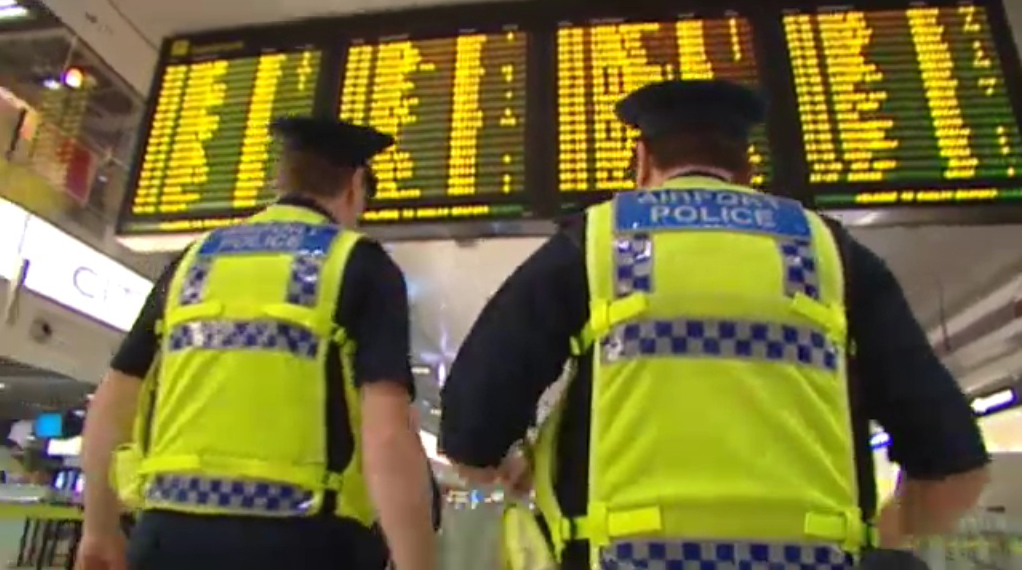 Know Your Rights – Don’t Talk To Cops At The Airport

When an ICE officer stopped me after I got off the plane I knew the harassment was about to begin.

But I was ready for it.

I confess to a dislike of the police; any police at any level.  I dislike equally local cops, state troopers, federal law enforcement from a myriad of agencies and prison guards.  I’ve always said, “Give a man a badge and a gun and you’ve created a monster.”  I also believe that my opinion about law enforcement in the United States is in the minority.

Most Americans like and trust the police.  We’re bombarded on social media by exhortations to “Back the Blue!”  We say “thank you for your service” along with the military at sporting events.  I’m something of a “progressive constitutionalist.”  I believe in freedom, equality, and individual rights.  I’m not going to back the blue.

I had the pleasure of flying back to the United States this week from an overseas trip.  The airline socially distanced passengers, so I had an entire row all to myself.  It was one of the easiest flights I’ve had in recent memory.  I arrived at John F. Kennedy International Airport after 10 hours in the air and was happy to be home.  I have an app on my phone called “Mobile Pass” that allows me to put my passport, flight information, and photographs in the Immigration and Customs Enforcement system so that I can just breeze through Immigration and go on to baggage claim.  It saves a lot of time.

‘Come with Me Sir’

I got off the plane at JFK having already completed the Mobile Pass and I went directly to the very short line for Mobile Pass holders.  The ICE officer was very nice, but after he scanned my passport, he said, “Please come with me, sir.  We’re going to have you talk to one of my colleagues.”  I’m not stupid.  I know what that means.  It means “let the harassment begin.”  But I was ready for it.

I was placed in secondary inspection, where I sat for about 25 minutes.  Finally, an ICE agent named Officer Oh called my name.  He was assisted by Officers Hippolyte and Castellano.  Apparently, it takes three armed people to deal with me.

“Have you ever been arrested for a crime?”  I wasn’t surprised that was the first question.  I’ve said consistently over the past eight years that I wear my conviction for blowing the whistle on the CIA’s torture program like a badge of honor.  I said so on CNN, MSNBC, Fox News and NBC’s Today Show.  It’s no secret.

My response was, “You know I have been.  You otherwise wouldn’t ask me a stupid question like that, which has literally nothing whatsoever to do with my travel today.”  The ICE agents looked at each other.  “What was the nature of your crime?” Oh responded.  I think he also didn’t expect my own response.

“I’m going to tell you guys exactly the same thing that I tell your friends at Dulles Airport when they harass me.  I’m represented by counsel.  I don’t talk to cops.  You have no right to detain me.  I’m a journalist and I’m going to write about this incident using your true names.  And you have no legal right to keep me from entering my own country.”

Again they looked at each other.  Finally, Oh said, “you’re free to go.”

You’re damn right I am.

I called my attorney as soon as I got out of baggage claim.  He told me that I did the right thing and that he wouldn’t have given answers any different from the answers I gave.  It occurred to me, though, that most Americans have no idea what their rights are.

The American Civil Liberties Union has a great article on its website telling people what to do when they are confronted by tin horn authority at airports around America.  The bottom line is that if you are an American citizen or a permanent resident (green card holder) you don’t have to answer any questions.

ICE can delay you, but they cannot stop you from entering your own country.  Tell them that.  Repeat it as a mantra if you have to.  And remember my personal mantra.  It works:

“I’m represented by counsel.  I don’t talk to cops.  You have no right to detain me.”

Cops are tough when they can hide behind each other, behind their guns, behind their badges, or behind qualified immunity.  But they’re powerless when faced with the power of the Constitution. Know your rights.

John Kiriakou is a former CIA counterterrorism officer and a former senior investigator with the Senate Foreign Relations Committee. John became the sixth whistleblower indicted by the Obama administration under the Espionage Act—a law designed to punish spies. He served 23 months in prison as a result of his attempts to oppose the Bush administration’s torture program.