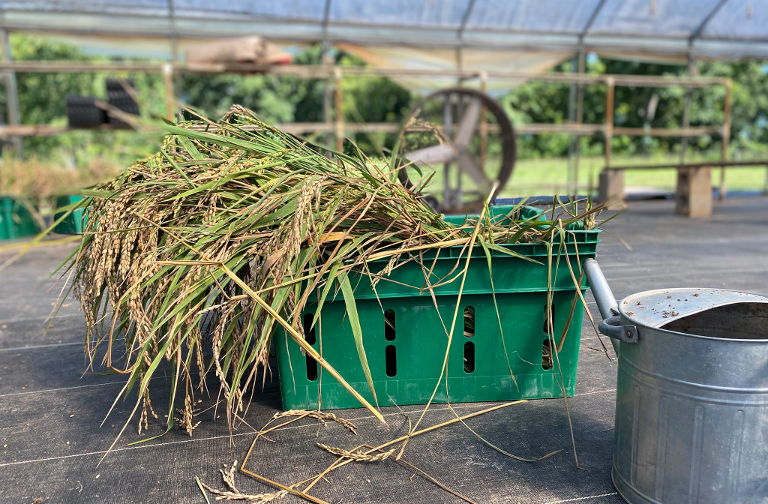 For African-American farmers — afflicted by the legacy of slavery, racism, and land theft — the struggle for emancipation has not been easy. I was therefore excited to learn about Jubilee Justice, a fledgling project that is trying to reclaim farmland for BIPOC farmers and secure their economic livelihoods. Besides embracing cooperatives and community land trusts, Jubilee Justice is dedicated to an open-source, climate-friendly type of rice farming and to courageous “transformational learning journeys” for racial healing.

You can learn more about these experiments in commoning in my interview with Konda Mason on the latest episode of my podcast Frontiers of Commoning (Episode #30).

Mason, cofounder and president of the Louisiana-based Jubilee Justice, is a long-time activist, social entrepreneur, and mindfulness teacher. Raised on social justice values by a farm family east of Los Angeles, she later cofounded the annual COCAP (Community Capital) conference in Oakland, which brings together progressive finance people to showcase new models of restorative economics and finance.

With Jubilee Justice, Mason decided that it is essential to confront issues of race and class as they manifest in land ownership, economics, culture, and our spiritual lives.

One way that the project does this is by helping reclaim land stolen from African Americans over the decades. There is a long and ugly history in American life of whites using various subterfuges – the legal power of eminent domain, discriminatory US Department of Agriculture lending, legal trickery, and more – to cheat African Americans out of their land.

As a 2019 New Yorker account of this history put it, “Between 1910 and 1997, African Americans lost about 90% of their farmland,” resulting in a loss of hundreds of billions of dollars. (See also these pieces on the theft of Black land in The Atlantic and The Nation.) Land theft has had predictable consequences on the ability of Black households to accrue wealth over generations, aggravating White/Black economic inequality that persists today.

Jubilee Justice is a modest attempt to redress this history by helping farmers acquire land and develop economically stable agricultural practices. One key tool in this regard is to decommodify and secure land by putting it in community land trusts, which protects it against market speculation and future sale.

“When you create a land trust and take the land out of private ownership and into a commons,” said Mason, “the land becomes open to groups of people who can work the land and build on it. The land is not subject to the ups and downs of finance, nor can it be liquidated in the future. This approach defies our whole economic system, which allows certain people to get super-rich and others to have nothing.”  (For more on the potential of community land trusts for African-Americans, see a proposal for a “Black Commons,” by Susan Witt, Executive Director of the Schumacher Center for a New Economics.)

Through Jubilee Justice, African-American farmers are also using agricultural coops to build vertical supply chains as a way to protect themselves from market exploitation by big corporate players. Instead, farmer coops can have greater control over selling produce to markets and mutualize their collective gains.

Jubilee Justice has even larger ambitions, however. It has entered into a working alliance with a transnational network of farmers to develop a more climate-friendly form of rice farming. Known as the System of Rice Intensification, SRI is an open-source, community-driven style of rice farming whose techniques have been developed by farmers themselves, in India, Madagascar, Indonesia, and many other countries. SRI farming – coordinated and supported by Cornell University’s agricultural college – does not depend on the Green Revolution practices using lots of water and fertilizer – and thus pollution and climate-destroying methane gases. It is a more of a localist strategy, with transnational collaboration, that improves rice yields and bolsters community food security while reducing methane emissions.

Even more impressive, Jubilee Justice is pioneering an experiment in racial reconciliation and healing. Its chief vehicles are “Jubilee Journey” encounter sessions that bring together wealthy white Americans and BIPOC wisdom-keepers. The point is to have honest, emotional reckonings with the realities of American racial history and capitalism that mainstream narratives downplay or ignore.

“We brought together all sorts incredible minds here in Louisiana, on a former plantation, with all of its trappings, where we meet in the Big House and have conversations about land, race, money, and our spiritual dimension,” said Mason. The sessions often have had life-changing impacts for  participants, helping them to understand the past and racial realities in new ways.

After five years, Jubilee Justice is still in its infancy, but it has already developed many productive, hopeful paths for moving forward. You can listen to my interview with Konda Mason here.

I’m happy to announce that this latest podcast episode includes a transcription of my interview with Konda Mason. Forthcoming episodes — and some previously released ones — will also include transcriptions. My deep thanks to Gane Ryan Duenas, a regular listener and commons enthusiast, for making this possible.