Above Photo: Voice of People 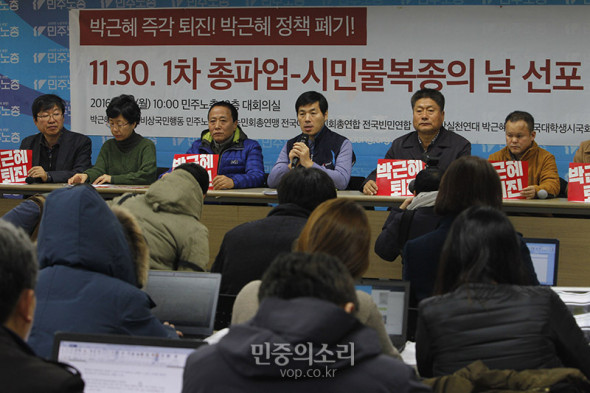 South Korean citizens will also engage in civil disobedience actions to call on the president to step down. Small business owners will close shop; farmers will drive their tractors in protest processions on city streets; and university students will stage a nationwide walkout.

Park Geun-hye announced on November 29 that she would be willing to step down before the end of her term if the National Assembly produces a deal with a “timeline and legal procedure” that allows Park to leave the presidential office in an “orderly withdrawal.” Opposition parties criticized the president’s announcement as a ploy to deflect the public’s attention away from an imminent impeachment process. Representatives of the opposition parties, including the Minjoo Party, assessed Park’s latest offer of “entrusting her fate to the National Assembly” as a maneuver to avoid possible impeachment and hang on to her presidential power as long as she can. 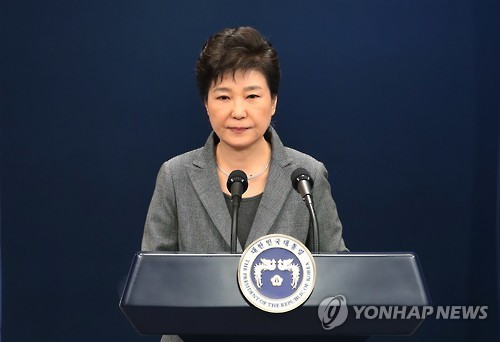 Park’s announcement comes days after the National Assembly began to take legal measures for her impeachment. Members of the three opposition parties (the Minjoo Party, People’s Party and the Justice Party) are in the process of preparing an impeachment motion, which they plan to draft by November 30. Despite the latest ploy by Park and her loyalists in the ruling Saenuri Party to avoid impeachment, the opposition parties are resolved to move forward with presenting an impeachment proposal to the floor of the National Assembly. 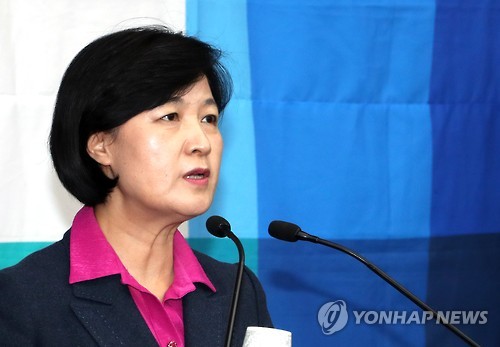 With a portion of the Saenuri Party hesitant to move forward with the impeachment motion, it seems as though the Park administration has bought more time for itself before the impeachment process has even begun.

On November 26, 1.9 million people took to the streets to demand the immediate resignation of President Park Geun-hye. This was the fifth consecutive week of protests since the eruption of the government corruption scandal involving Park and her close friend Choi Soon-sil. Since October 29, when the weekly demonstrations began, the numbers of people joining the actions on the streets have progressively increased. November 12 was the first time the demonstration hit the one million mark.

On November 26, close to 1.6 million people gathered in Seoul alone. They converged in Gwanghwamun Plaza, then marched peacefully towards the Blue House and were able to get as close as 200 meters from the presidential residence. 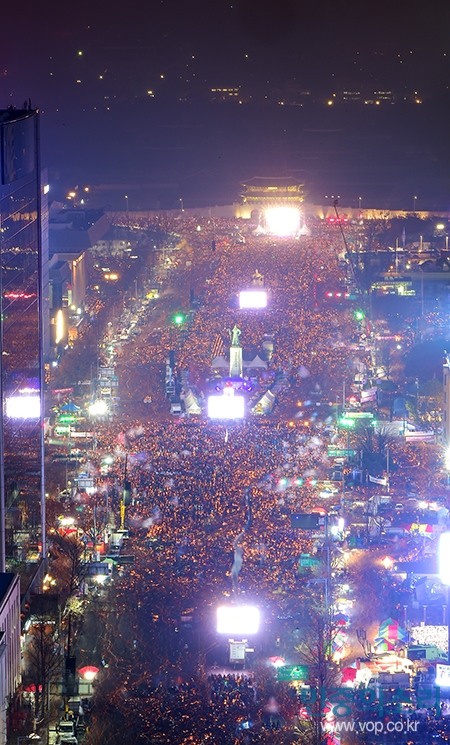 Protesters also gathered in major cities across South Korea, including 130,000 in Busan and 50,000 each in Gwangju and Daegu. Almost 400,000 took to the streets in cities and counties outside of Seoul.

Protesters demanded that Park be removed from office and held accountable for being a key orchestrator in the government corruption scandal involving the illegal collection of corporate funds and bribery, as well as allowing her confidante Choi Soon-sil to intervene in government affairs and access classified government documents. They also called for Park to be held responsible for the many undemocratic policy decisions her administration unilaterally imposed upon the people of South Korea in the last four years – from labor market reforms favoring corporations over workers’ rights, topolicies that provoke war tensions on the Korean Peninsula whilst bolstering U.S. military interests in the Asia Pacific region. They yelled chants and held up signs calling for Park’s arrest.

Farmers in a procession of tractors and trucks en route to Seoul to join the anti-Park mass protest on November 26 were met by the police trying to prevent them from entering the city. The police claimed that the tractor procession would disrupt traffic on roads leading to and within the country’s capital. 150 tractors were stopped by the police in the middle of a highway on the eve of the protest, and the farmers faced off against the police until the following morning. For brief periods on several occasions, the farmers were able to maneuver past the blockades of police vans, but the police eventually resorted to using excessive force to block their entry into the capital city. Three farmers, including the chairperson of the Korean Peasants League (KPL), were taken to the hospital after incurring injuries from police violence. Additionally, 36 farmers were arrested. 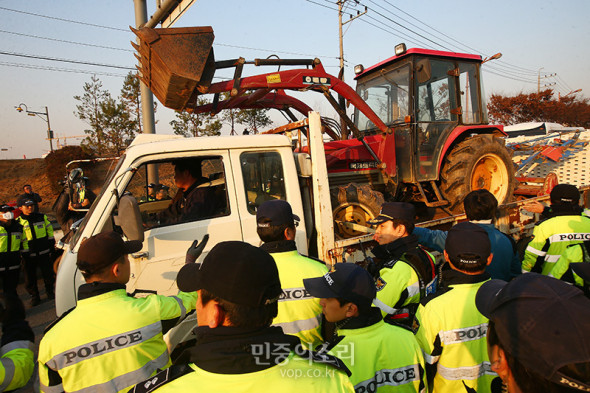 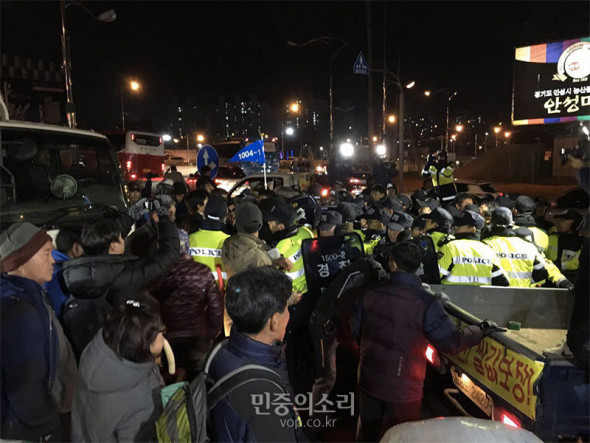 The Korean Peasants League (KPL) had launched the tractor procession on November 15. Aptly named the “Jeon Bong-jun Battle Group,” after one of the key leaders of the Donghak Peasant Revolution of 1894, farmers from across the country joined two convoys of tractors traveling from south to north through the eastern and western parts of South Korea. The two convoys came together to form one procession on November 24 just outside Seoul in Anseong, Gyeonggi Province. The KPL farmers planned to travel as a procession into Seoul all the way to the Blue House. Almost immediately after their departure from Anseong on November 25, however, the farmers were forced to face off with the police. 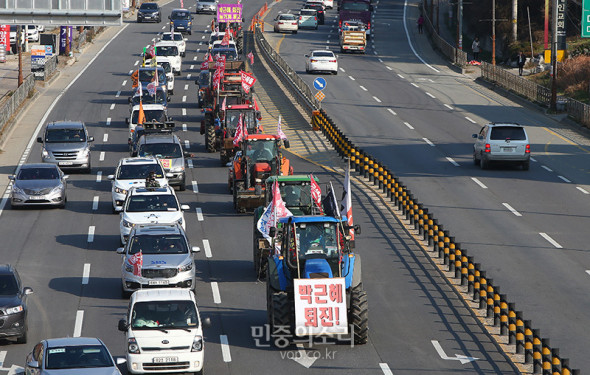 KPL leaders say they will continue to repeat the tractor procession until the president finally steps down.