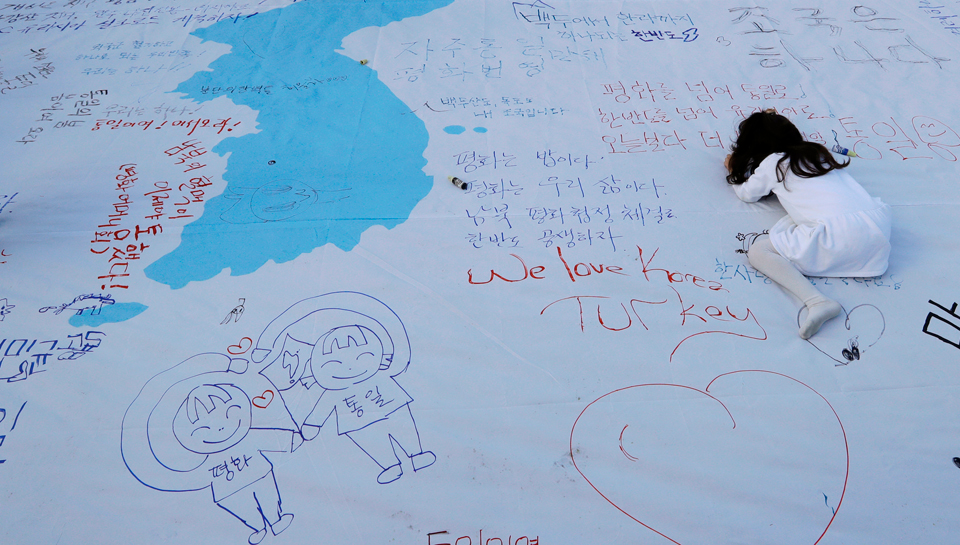 Koreans Want Peace But Will US Stick To Trumps Pledges

Above Photo: In this April 21 photo, a girl writes a message next to a map of the Korean peninsula during the welcoming event for the summit between South Korea and North Korea in downtown Seoul, South Korea. Both North and South have distinct visions of what a unified future might look like. North Korea’s founder Kim Il Sung had a plan along the lines of what Hong Kong has with China, a unified nation with two separate systems of government. South Korea’s three-step proposal ends in in its own system writ large across the peninsula. | Lee Jin-man / AP

So Donald Trump and his hawkish right-wing advisors meet with North Korean leaders, and some Democrats and liberals are criticizing what appear to be steps towards peace. What gives? Why is this so confusing? It’s confusing because the American public has been lied to for decades by Republican and Democratic administrations, who have been aided by a massive media cover up.

The main players in resolving the Korean situation are not Trump, the Chinese, Russians, nor the Korean politicians. The main players are the masses of Korean people on both sides of the Cold War border that still divides their country. Hundreds of thousands, even millions, of South Koreans have been demonstrating for an end to military threats and warmongering. These huge demonstrations were barely mentioned in the American corporate news media. The U.S. big business media is using lies, omissions, and lots of smoke to confuse us about Korea. Last week, the people of South Korea delivered a big victory in local and by-elections to President Moon Jae-In’s party and allies, affirming strong support for his role in the peace process. That also had very scant coverage here.

The Korean people have been struggling for independence and self-determination (unification) since they were colonized by Japan in 1910. Brutal Japanese rule was similar to the horrors of European colonialism in Asia and Africa. One difference was that, unlike in European colonies, Korean Christians and missionaries were seen by the Japanese as potential agents of rival European powers. Resistance to Japanese Colonialism, including the Korean Communist movement, grew with strong support within the persecuted Christian communities. By the end of World War II, a strong Communist-led partisan army had liberated some parts of the country, while U.S. and Soviet troops entered Korea and divided the country along the 38th parallel.

The north ended up as the “Democratic Peoples’ Republic of Korea,” led by the Communist forces who had fought the Japanese. The Soviet Union withdrew its military. In the south, the U.S. set up the “Republic of Korea,” a fascist-type dictatorship led, mostly, by men who had collaborated with the Japanese. U.S. troops stayed in the South to help crush the popular resistance by democratic forces who wanted unification. U.S. troops are still in Korea today. Since the 1980s, South Korea has developed a modern capitalist economy and political system.

The Korean War lasted from 1950 to 1953. Each side has accused the other of starting the war, although the U.S. media never mentions that anybody thinks or claims the South was the guilty party. The war resulted in hundreds of thousands of deaths and injuries. In the north, essentially not one building was left standing—not even an outhouse—and it wasn’t much better in the south. The war ended with the country still divided, but yearning for unity.

The most important fact we haven’t been told is that North Korea, or decades, has been making the same three demands.

First: A peace treaty with the United States to end the Korean War. A ceasefire was signed in 1953, but we are officially still in a state of war. Until this year, this North Korean demand has never found its way into American TV or newspapers, and I mean never.

Second: De-nuclearization of the Korean peninsula.  Listening to our TV pundits—whether on Fox, CNN, or MSNBC—you would think the Korean peninsula was only the North. They lie. Why don’t they tell us that “No nukes in the Peninsula” also means no U.S. nukes in the South, or nuclear-armed ships sailing into Korean ports, or even within a certain territorial waters of Korea.  Also, they imply that this is a new demand. It isn’t. As part of any verification process for de-nuclearization, will the North Koreans have the right to inspect U.S. Navy ships docking in South Korea?

Third: Reunification of Korea. The Korean people are one nation with a strong sense of identity. Both Korean states have a cabinet-level Ministry for Unification. It’s the will of the people, and it’s possible in spite of the different political and economic systems. China instituted a “One Country, Two Systems” policy when they reabsorbed Hong Kong and Macao, and they’ve been offering it to Taiwan. Maybe Korea could do something similar.

When the leaders of North and South Korea met at Panmunjom on April 27, they issued a declaration calling for a Peace Treaty, de-nuclearizing the Peninsula, and reunification, but I had to read that in the Chinese press. Clearly, the majority of Korean people support these historical demands, but will the Trump administration agree or end up sabotaging it all?

It’s hard to imagine the U.S. agreeing not to bring nukes into Korean waters. U.S. imperialism will not relish giving up its only bases on the Asia-Pacific coast mainland, right between China and Russia. A peaceful settlement in Korea, however, would make it hard to justify the expense.  The North Koreans might be willing to accept a gradual or partial reduction of U.S. forces in Korea, and the U.S. might be ready to look for a resolution. After all, everything eventually comes to an end, and that includes the division of Korea. The Korean people are demanding it, but I don’t expect the Trump administration to make lasting peace.

American workers should fully support the Korean peoples’ struggle for peace and unification. The 2018 elections are a good opportunity to ask candidates for Congress to genuinely support the peace process.