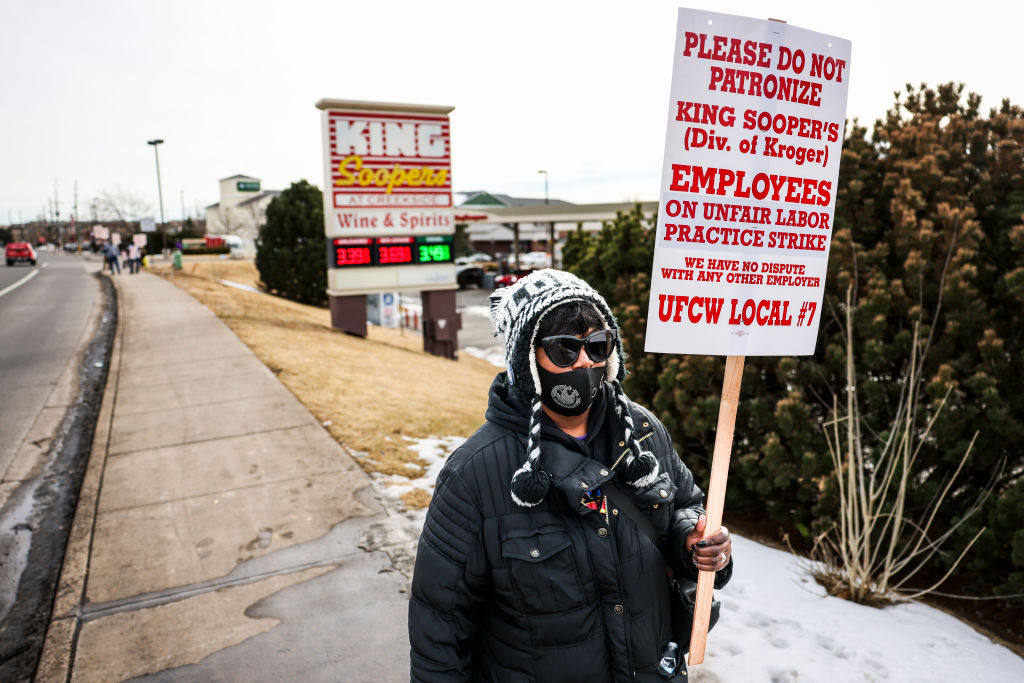 Kroger Employees In Colorado Have Had Enough

Above Photo: King Soopers employee walks the picket line during a strike at more than 70 stores across the Denver metro area on January 12, 2022 in Glendale, Colorado. Michael Ciaglo / Getty Images.

Thousands Are Now On Strike.

More than 8,000 workers at Kroger-owned King Soopers and City Market stores are on strike in Colorado. Their fight highlights the company’s long history of atrocious treatment of its workforce.

On Wednesday, January 12, more than eight thousand workers at around eighty King Soopers and City Market grocery stores in Colorado went on strike after declining what the stores’ parent company, Kroger, called its “last, best, and final offer” on Tuesday. The workers, who are members of United Food and Commercial Workers (UFCW) Local 7, had voted nearly unanimously to authorize the strike earlier this month.

The King Soopers contract expired on January 8, and workers say the company — which is owned by Kroger, the country’s largest grocery chain and fourth largest private employer — has been dragging its feet at the bargaining table. Distance remains between the two sides on issues of pay, health care benefits, and worker safety — in the sense of COVID precautions as well as protections from customers; in 2021, there was a mass shooting at a King Soopers in Boulder, and workers say people regularly threaten to shoot up stores. But the union says workers are now striking over the company’s unfair labor practices (ULP).

“For months, we’ve requested critical and necessary information such as work hours and sales in order for us to evaluate and cost out proposals, and the company has failed and refused to provide that information,” says Kim Cordova, president of the seventeen thousand–member UFCW Local 7. She says additional unfair practices by the company include sending out texts to workers that contain partial or different information than that which is presented at the bargaining table, as well as threatening to discipline or actually disciplining workers for wearing union apparel on the job. Kroger has in turn charged the UFCW with unfair labor practices.

It is illegal to permanently replace workers who are on strike over unfair labor practices (as opposed to one over wages or working conditions). Kroger has said it will keep stores running during the strike, and is seeking replacement workers, incensing current workers by offering scabs $18 an hour, well above the $16 an hour wage floor the company has proposed at the bargaining table.

“There are workers living in their cars because they can’t afford to live in the city in which they work or their wages don’t allow them to afford rent in Denver, or in Colorado at all,” says Cordova. A recent survey of more than ten thousand Kroger workers, including many Local 7 members, bears out that claim, finding homelessness and food insecurity shockingly common among the company’s workforce.

Kroger’s latest proposal includes the wage floor of $16 an hour — a mere 13 cents above Denver’s minimum wage of $15.87 — as well as a ratification bonus of $2,000 for most workers and $4,000 for workers with a decade or more of tenure at the company (a rarity at a high-turnover chain that has seen more workers than ever leave during the pandemic). Kroger has not released the details of its proposals, though it has said they amount to up to a $4.50 an hour raise, a claim the union disputes. According to the UFCW, Kroger’s proposals amount to far less money per hour than the union’s desired $6 an hour raise; indeed, employers frequently prefer one-time bonuses to hourly raises that lock in higher scales.

Kroger has a well-established pattern of resisting any measures that prevent it from minimizing labor costs. At the start of the pandemic, when the rhetoric labeling grocery store workers “heroes” was at its height, the company followed its peers in instituting $2 an hour hazard pay. However, it terminated the raise by mid-May, even as the virus continued to spread across the country, infecting grocery store workers at an alarmingly high rate. When cities passed local ordinances mandating hazard pay, the company shuttered locations entirely rather than abiding by the measures.

“They took away hazard pay and then weeks later, the CEO [Rodney McMullen] got a 21 percent pay increase,” says Cordova. That pay bump means that McMullen now makes 909 times more than the median Kroger worker.

An additional point of dispute between workers and Kroger concerns the company’s push to replace union jobs with independently contracted labor, such as is offered through staffing agencies or gig companies like Instacart. Last month, the union filed a federal lawsuit against Kroger over the violation.

“We had workers that do the shopping in our stores, and we represented delivery drivers,” explains Cordova. “Kroger shut down our home-shop departments to outsource our jobs to Instacart, which means low-wage, unbenefited workers.” She adds that the company is now using such third-party entities to stock shelves at stores as well.

In response to the strike, Joe Kelley, president of King Soopers and City Market, characterized Local 7 as “putting politics before people and preventing us from putting more money in our associates’ pocket. Creating more disruption for our associates, their families, and Coloradans rather than negotiating for a peaceful resolution is irresponsible and undemocratic.”

“We have a difference in what more money means,” says Cordova when asked about that statement. “If they offer you thirteen cents over the minimum wage, that’s not bettering the life of workers.” As to Kelley’s description of the strike as “undemocratic,” she notes that twenty-four hundred Colorado workers have left King Soopers in recent months and the strike authorization vote was nearly unanimous. “The workers have a clear message to the company,” she says, noting that Kelley has attended a total of nine minutes of bargaining.

Asked how health and safety concerns have gotten so bad at a union workplace, Cordova points to the weakening of labor laws and the gutting of the state’s Occupational Safety and Health Administration (OSHA), leaving workers reliant on a federal OSHA department that itself has been largely dismantled. But with workers as fed up as they’ve been in a long time, the possibility of a shift in power is real, and advanced by actions like the current strike.

While the work stoppage is ongoing, King Soopers workers ask that customers do not shop at stores which are on strike but rather, join them on the picket line. Additionally, there is a strike fund to which supporters can donate.