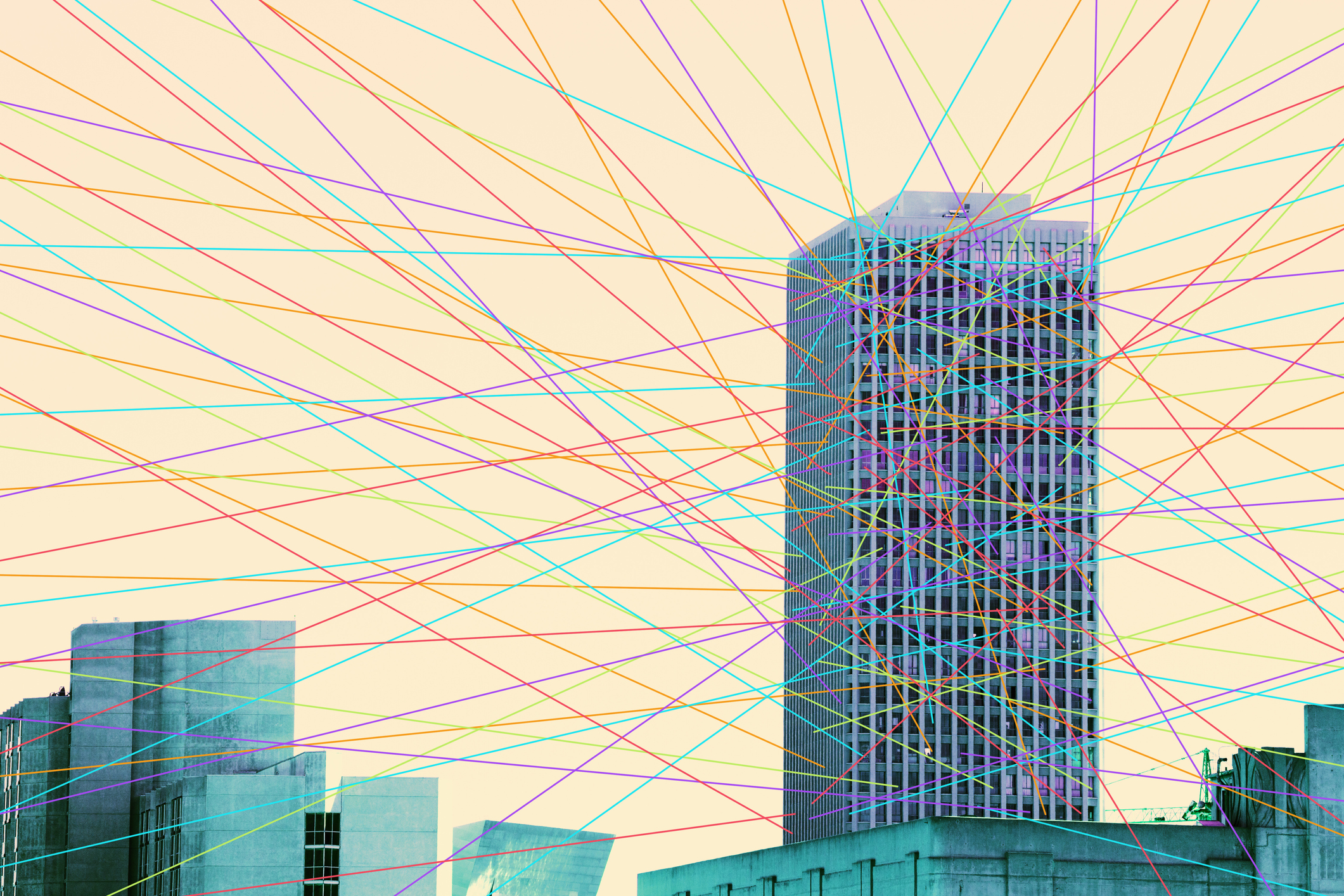 Post-pandemic, there is near universal agreement that fast reliable internet is as essential as electricity or water, but the debate over who should provide it and how is still heated.

Big telecom companies have long fought to keep government out of their business: Barriers to municipal broadband are in place in 18 states, making it hard for localities to establish their own networks, thanks to industry lobbying. Even in California — where legislators lifted a restriction on public broadband in rural areas in 2018 — publicly owned networks are still rare.

Now, however, $65 billion in broadband funding included in last year’s federal infrastructure bill has changed the dynamic, fueling a nationwide rush by state and local governments to connect residents to the internet. Los Angeles County is at the forefront among municipalities with a public-private partnership to offer free broadband internet to its poorest residents in Watts, Boyle Heights, Sun Valley and four other communities as soon as year’s end. These are neighborhoods that are heavily Latino and Black.

The Los Angeles Chamber of Commerce and the Los Angeles County Business Federation were among dozens of groups and individuals that contended a county-run system would deliver inferior service, and argued for subsidizing low income people, not building new networks to connect them.

“By elevating the county as head operator, we place our most vulnerable students, workers, and other community members in the slow lane of connectivity with inferior and unreliable service,” wrote L.A. County Business Federation spokesman Chris Wilson in an email to Capital & Main.

The Board of Supervisors, however, were not swayed by the argument, and voted unanimously last November to move forward with plans both to back subsidies for lower income people and  build their own system.

Now, county officials seek private partners to design, build and manage high speed wireless networks. Companies have until May 13 to submit their qualifications.

Before the board vote, Griselda Perez, a mom of three sons who lives in Boyle Heights, told the supervisors that during the COVID lockdown, her lack of reliable internet service made it difficult for her kids to continue their studies online. One of her sons saw his grades slip from As to Cs and a few Ds because of difficulty connecting to the internet. The family cut expenses so they could subscribe to faster Wi-Fi. “And still we cannot afford it,” she said. “I am seeing every day in our families, in our schools, every day, dealing with these issues.”

Sixteen-year-old Ana Baena also struggled. When she came to L.A.from Mexico to join her adult sister last year, she enrolled at Roosevelt High School in Boyle Heights and wanted to succeed. “Since I came back from Mexico, I started appreciating my education,” Baena told Capital & Main. “I’m an overachiever.”

There Is A Direct Correlation Between Lack Of Access And Race And Income. That Is What Digital Inequity Looks Like For Me In Los Angeles County.

A Florida native, Baena had been back and forth across the border, so language and culture weren’t barriers. But online classes were. She obtained a laptop from a local nonprofit, but the only way she could connect to classes was through her sister’s hotspot. “I tried learning through Zoom but math was really hard,” she said. To solve math problems, “You have to know the steps.” And she’d invariably miss some instructions when her internet connection repeatedly crashed. Sometimes she’d upload an assignment and before it was sent, the signal would disappear. She’d restart her computer, lose the work she’d done and have to start over from scratch.

In Boyle Heights and Watts, more than one in four households is likely to experience similar struggles because they lack in-home internet connections, according to census data compiled by L.A. County. In sharp contrast, all but about 3% of households in the heavily white and wealthy enclaves of Brentwood and Pacific Palisades are connected to the internet. “There is a direct correlation between lack of access and these households’ race and income,” said County Supervisor Hilda Solis. “That is what digital inequity looks like for me in Los Angeles County.”

Now the county’s goal is “to reshape the internet service marketplace … toward one that is more equitable, just and resilient,” according to its solicitation for potential private sector partners.

Residents need internet connections immediately to apply for jobs, for medical appointments, for school and legal assistance, and many cannot afford the monthly bills, Hollins said.

The county’s solution: a five year pilot public-private partnership to connect people quickly and free of charge to the internet in seven neighborhoods using wireless technology. In addition to Watts, Boyle Heights and Sun Valley/North Hollywood, the county plans projects in Panorama City, East Los Angeles, Pico-Union and South Los Angeles. Transmitters would sit atop county buildings, schools and light poles, beaming radio signals into homes and apartments. The county is also studying the feasibility of building fiber optic networks, a costly but durable solution that would make fast internet available to local residents far into the future.

“I was pretty impressed with [the county’s plan],” said Christopher Mitchell, director of the Community Broadband Networks Initiative at the Institute for Local Self-Reliance in Minneapolis. Mitchell speaks and writes extensively on the topic of publicly owned broadband. He has seen many cities develop plans that didn’t seem viable. “This looks realistic and focused.”

However, at the University of Pennsylvania Law School, Professor Christopher Yoo is skeptical that municipal networks can succeed. “Running a telecom company is a full-time business which requires focus from CEOs and innovative marketing,” he said.  In 2017, Yoo studied the financial performance of 20 municipal fiber networks, which are far more costly and capital intensive than the projects L.A. County is currently planning, and found five were sold at a loss and two had defaulted on debt. He cautioned municipalities considering such projects to make 20-year financial projections and ensure funds are available for contingencies.

At UCLA’s Latino Policy and Politics Initiative, director of research Rodrigo Dominguez-Villegas also gave the county plan positive reviews. He argues the county can overcome its lack of expertise in internet service provision with its plan to partner with private firms. He also said that the county’s entry into the market could bring down costs and improve service, especially if it offered plans to higher income customers.

Such competition is already occurring. L.A.’s biggest internet service provider, Charter Spectrum, is poised to compete with the county, even for subsidized customers: On March 31, the company launched in 41 states a new free and fast internet service plan identical to the one L.A. County plans to offer low income residents.  With this move, the county has arguably moved a bit closer to its market-reshaping goal.

Big Telecommunications Companies Have Long Opposed Municipally Owned Networks, Arguing That They Are Wasteful And Duplicative.

In an email, Johnson highlighted the company’s free high speed internet, and its philanthropic work to support digital skills training: “Closing the digital divide will require a comprehensive solution and Charter will continue to build on the strong record of successfully working alongside state and local governments to identify and help connect unserved and underserved communities across the country.”

For instance, last summer, AT&T CEO John Stankey called the Biden administration’s plan to provide broadband funding to states and localities “misguided,” but now that publicly owned systems are moving forward, the company said in a statement: “We share L.A. County’s vision to connect more residents to high-speed internet. This is a once-in-a-generation opportunity for a public-private partnership to build high-speed networks using funds from the American Rescue Plan.”

AT&T didn’t respond to Capital & Main’s query about whether it seeks to partner with the county to create wireless networks.

Mitchell of the Institute for Local Self-Reliance said he would expect giant telecommunications firms to bid on the county’s projects, while maintaining their opposition to municipal broadband, despite AT&T’s statement. “They face a real threat to their model if cities find ways to bring new providers into the market because their stock valuations are boosted by the perception that they have very little competition to fear,” Mitchell said.

Indeed, both AT&T and Spectrum, along with Verizon and T-Mobile, appear on an April 2021 list of more than 200 firms that expressed interest in partnering with New York City on a project similar to L.A County’s.

Companies that do seek partnerships with the county must offer download speeds of 100 Mbps — fast enough for as many as four people in a home, each on their own devices, to watch videos, do homework, scroll social media feeds or even join multiplayer games. The county would own the networks and service would be free of charge for people who qualify for $30 per month federal broadband subsidies: individuals who earn $27,180 or less per year, or who receive government benefits like Pell grants or food stamps. County officials have yet to determine whether the service would be offered to higher-income earners and if so, at what price.

A virtual Q&A for potential private sector partners earlier this month drew more than 100 people, including representatives from Cisco and Nokia and former New York City Chief Technology Officer John Paul Farmer, who is now chief innovation officer at Utah-based wireless broadband provider WeLink. Farmer, whose company offers internet service in Nevada and Arizona, told Capital & Main that one attractive feature of the county’s proposal is that companies will have access to public infrastructure like buildings and light poles to build their system. At least two companies that currently offer low-cost internet to public housing tenants using a model similar to the one the county envisions also joined: Boston-based Starry, Inc., which serves Housing Authority of the City of Los Angeles tenants for $15 per month, and MonkeyBrains.net, based in San Francisco, which provides free service in Bay Area affordable housing complexes.

Funding for L.A. County’s wireless networks seems plentiful now, but UCLA’s Dominguez-Villegas cautions that the county’s project could falter if the political winds change and money is no longer available. In the long run, county officials must secure “sustainable funding that won’t dry up,” he said.

As for Ana Baena, she’s now a junior attending in person at Roosevelt High, and she’s become an activist with InnerCity Struggle, the nonprofit that helped her get her laptop during the pandemic, helping push for educational equity in East Los Angeles.