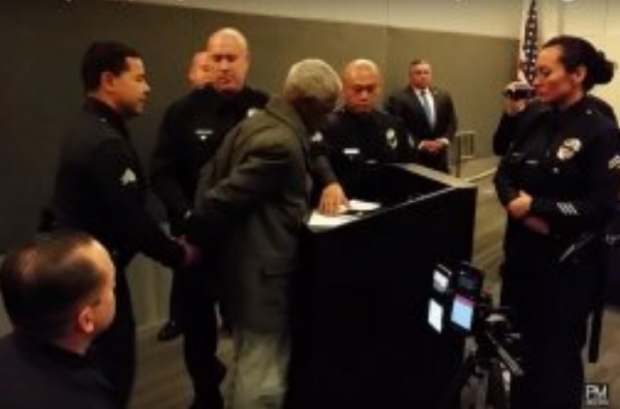 The ACLU is fighting an ordinance that would make it easier for the city to shut down criticism.

The Los Angeles Police Department has apparently been arresting residents for speaking 20 seconds longer than their allotted time at public city hearings. Now the ACLU of Southern California is fighting an ordinance that could make it even harder for residents to speak out—especially those who dissent against the practices of the LAPD. If passed, the ordinance will make it “an arrestable offense to violate any posted rules of public facilities” and would empower law enforcement to make criminal trespass charges, tighten restrictions on speaking time and shut down criticism at meetings.

Pushing back on the proposed restrictions, the ACLU is circulating a petition targeted at councilmembers and tweeted out a call to action Wednesday morning:

LAPD is arresting people for speaking 20 secs over their time at public hearings. They want a new law that allows them to criminalize these people for exercising their civic duties. Take action to oppose this draconian measure. https://t.co/MuALQYcKvB pic.twitter.com/5bMfHhkKyU

The tweet comes after Melanie Ochoa, a staff attorney at the ACLU of Southern California, who sent a letter Tuesday morning to Los Angeles Mayor Eric Garcetti and Los Angeles city councilmembers. The letter calls on them to “reject the proposed ordinance,” because “although styled as a public safety ordinance, it would do nothing to improve public safety.”

The letter goes on to reference two specific cases in which residents were removed from meetings at the Board of Police Commissioners.

The LAPD had the most “officer-involved killings” in 2015 and 2016, according to the Guardian. When the data is compared to cities with similar populations, the “rate of fatal encounters” was higher in LA than both Chicago and New York last year. The ACLU letter states:

“Part of the duty of public officials is to bear the brunt of the public’s displeasure as well as expressions of gratitude and satisfaction. City Council’s irritation is not a public safety threat, and the serious consequences of criminal law should be limited to conduct that actually poses a risk to the safety of others.”

The letter gives the example of 81-year-old Tut Hayes. A video posted by user PM Beers shows Hayes speaking at a meeting in 2016, before being forcibly removed from the room, while onlookers yell at the police to let him go.

Black Lives Matter organizer and professor Melina Abdullah tweeted about Hayes in light of the ACLU’s call to action:

Mr. Hayes was dragged and arrested at 82 years old for allegedly speaking off topic. New ordinance would make this treatment new norm. https://t.co/G2uYOj1kay

Abdullah has also been removed from several Board of Police Commissioners meetings. As the Los Angeles Times reported in May 2016, an LAPD spokesman said Abdullah “was removed from the room by officers and later arrested on suspicion of resisting arrest.” According to the ACLU, she “was arrested for speaking 20 seconds over the 2-minute public comment limit.” After the 2016 arrest, Abdullah tweeted:

What did I do to get arrested out of LA Police Commission this morning? Same as the 4 other activists arrested b4 me this yr. Speak. @BLMLA — Melina Abdullah (@DocMellyMel) May 11, 2016

The video of the removal from the meeting can be seen here:

Neither Hayes nor Abdullah was charged following the 2016 removals and arrests. However, as the ACLU’s letter states, “Neither was ultimately charged with a crime, because they had violated no law. This ordinance seeks to change that.”

Abdullah, along with several other community members, was arrested this August during a meeting on the shooting of Carnell Snell Jr. They were subsequently released.

4 activists handcuffed after failing to disperse police commission meeting during 2nd unlawful assembly @DocMellyMel among those in custody. pic.twitter.com/Jfhc8ZYQar

The ACLU letter also includes claims the ordinance could allow for selectivity in enforcement given the content of public remarks. The ACLU also raised concerns about the potential overreach of the ordinance, going into the use of public spaces, library resources and the use of discriminatory policing tactics.