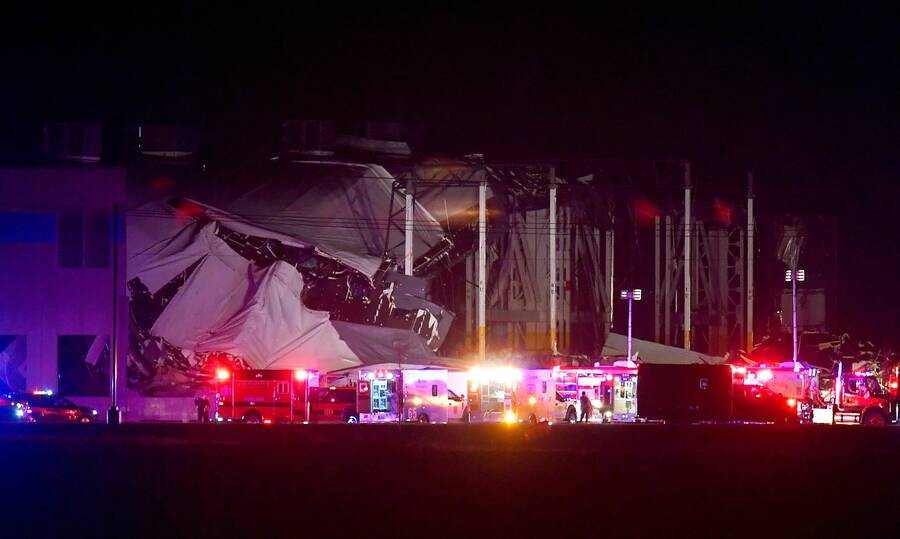 Labor Activists Want To Know Why Workers Were Left To Die

Above Photo: First responders surround an Amazon Fulfillment Center in Edwardsville, Illinois, on December 10, 2021, after it was hit by a tornado. Tim Vizer / AFP / Getty Images.

Grief, Anger, And Demands For Answers After Tornadoes Kill At Least 14 U.S. Workers.

In the aftermath of a rare string of December tornadoes last Friday night that left 80 people dead across six states, labor activists are questioning why employees at two large worksites in the path of destruction were left exposed to danger.

A candle factory in Mayfield, Kentucky was totally destroyed after sustaining a direct tornado hit with 110 workers inside. At least eight people died and dozens more were severely injured. At the same time, an Amazon delivery station in Edwardsville, Illinois was also hit by a tornado during a shift change, causing the roof to fly off and part of an exterior wall to collapse, killing six workers ranging in age from 26 to 62.

As search-and-rescue teams sifted through the rubble the next morning, Amazon founder and world’s second-richest person Jeff Bezos was celebrating another successful rocket launch by his private spaceflight company Blue Origin. Meanwhile, Amazon was unable to say for sure how many of its workers were trapped inside the devastated delivery station.

“While a tornado is a rare and extreme event, we know that Amazon’s disregard for workers’ safety is unfortunately a chronic pattern that puts workers at risk every day,” said Tommy Carden, a lead organizer with Warehouse Workers for Justice (WWJ), a worker center based in Joliet, Illinois.

Indeed, this past year alone, Amazon has faced repeated criticisms for expecting employees to continue coming to work even in the midst of extreme weather events like deadly heatwaves and floods, illustrating how many of the same frontline workers who have borne the brunt of the Covid-19 pandemic are also vulnerable to the impacts of climate change-fueled disasters.

“No Room For Humanity In Amazon”

According to local authorities, the first tornado warning for Edwardsville, Illinois was issued around 30 minutes before the deadly twister formed. Workers report being told to take shelter in bathrooms. At least one bathroom was hit by the tornado, killing 26-year-old driver Austin McEwen as he took refuge there.

Larry Virden, an Amazon driver and father of four, told his girlfriend in a text message shortly before the tornado that “Amazon won’t let me leave.” He also died in the disaster.

“Requiring workers to work through such a major tornado warning event as this was inexcusable,” said Stuart Appelbaum, president of the Retail, Wholesale and Department Store Union (RWDSU) — which has been leading a high-profile campaign to unionize an Amazon warehouse in Bessemer, Alabama. “This is another outrageous example of the company putting profits over the health and safety of their workers.”

“The site got tornado warnings between 8:06 and 8:16, and site leaders directed people on site to immediately take shelter. At 8:27, the tornado struck the building,” an Amazon spokesperson told In These Times. “The majority of the team took shelter in the primary designated location. There was a small group who took shelter in a part of the building that was then directly impacted by the tornado, and this is where most of the tragic loss of life occurred.”

The company declined to comment on Virden’s text message about not being allowed to leave.

“Whether during a tornado, hurricane, or heat wave, mgmt [management] treating workers like numbers puts our lives at risk,” tweeted Amazonians United—a movement of Amazon workers across the country who have been organizing for higher pay and improved safety since 2019.

Members of the Amazonians United in Chicago said that at their South Side warehouse, “We’ve had a fire, power outage, [and] flood,” yet were told each time to “keep working.”

The worker, who is a member of Amazonians United, told In These Times the company has “no real policy” when it comes to having employees come in during extreme weather events.

“They very, very rarely tell you whether to come in or not, so you just have to judge it for yourself. It’s sort of this subtle way of getting you to come in even if you are not really feeling safe,” the worker explained. “They abdicate responsibility for everything and put it all on us, and it’s ridiculous.”

Amazon workers around the country say they have never received emergency training, according to The Intercept.

The lack of training is perhaps related to Amazon’s reliance on contractors and temps, a practice that helps the company evade liability for work-related accidents. Out of 190 workers at the Edwardsville delivery station, only seven were full-time employees of the company.

Amazon workers have also raised concerns about the company’s traditional ban on personal cell phones inside warehouses, as it can restrict them from accessing warnings about severe weather or other emergencies. The ban was temporarily lifted in the pandemic, and the company has said it was not in place at the Edwardsville facility.

“The needless deaths were a reminder of Amazon keeping shifts going during other disasters, such as at the Staten Island facility during Hurricane Ida,” the union said. “Even as water poured in to the lobby of that warehouse, safety-conscious workers who refused to work that night were terminated.”

The Amazon Labor Union’s leader, Chris Smalls, said in the wake of the tragedy, the company should immediately recognize their union “as a matter of public health and a matter of reparations.”

The Occupational Safety and Health Administration (OSHA) has opened an investigation into the disaster at the Evansville delivery station, but Warehouse Workers for Justice is demanding state hearings into Amazon to establish protocols around the construction of new warehouses.

“We’re calling on state legislators to step up to review the processes on how these warehouses go up,” said Marcos Ceniceros, WWJ’s interim executive director. “These warehouses are popping up all over the place very quickly. We need to take a second to pause to make sure this is happening responsibly with the workers and communities in mind.”

“Unnecessarily Put Into A Dangerous Situation”

The first tornado alarm in Mayfield sounded nearly three hours before a twister reduced the plant to rubble, killing at least eight. Five factory employees who survived told NBC News that in the critical hours and minutes leading up to the tragedy, supervisors threatened to terminate them and their coworkers if they left the factory.

An MCP spokesperson called the allegations “absolutely untrue.” The company also claims there were regular emergency drills at the plant, but employee Jarred Holmes told the Associated Press there were no drills in the months he has worked there.

“We are very sorry for the loss of life that occurred. At the same time, we are really appalled that the opportunity probably existed for folks to be sent home or away from the factory, where they may have been able to shelter,” said Bill Londrigan, president of the Kentucky State AFL-CIO.

“The workers were unnecessarily put into a dangerous situation,” Londrigan continued. “There were numerous reports of impending strikes by tornadoes moving through the area and it didn’t seem like those warnings were adequately heeded. Threatening to fire workers for being concerned for their safety is not acceptable.”

The husband of Janine Johnson-Williams, one of the factory workers who was killed, told the Kentucky Center for Investigative Reporting: “I just wish they had called and said, ‘No one come in till it’s over, till we see what’s going on. Till it’s passed over.’”

Production at the candle factory was reportedly going “24/7” to meet demand for the holidays. In the days before the disaster, the company was seeking to hire more workers, offering a starting pay of $8 per hour and noting that “mandatory overtime will be required frequently.”

MCP had recently made an agreement with the nearby Graves County Jail to bring incarcerated people to work at the factory for an undisclosed amount of pay. Seven incarcerated people were working inside the factory when the tornado struck — all made it out alive, but a sheriff’s deputy who was monitoring them perished. Unlike the candle factory, the jail was “completely evacuated” before the tornadoes came through.

Londrigan noted that the incarcerated workers “didn’t have the option to leave” the candle factory amid the tornado warnings. “It’s indicative of the possibility of coercion and exploitation of those workers being leased out to the employer. The fact that a deputy had to be there raises questions about the use of taxpayer dollars for supervising inmates at private facilities that are profiting from their work.”

MCP has also sent representatives to Puerto Rico to recruit people to come work at the Kentucky factory for $10 to $12 an hour, including a man who sued the company in 2019 alleging he was fired for being overweight. The lawsuit, which was later dismissed by a judge, included a screenshot of a text message apparently sent by MCP’s chief financial officer stating: “We are working diligently to clean up the epileptic, obese, pregnant, and special needs issues.”

After Friday’s tornado, Kentucky’s state Occupational Safety and Health Program is launching an investigation into the candle factory, and at least three survivors are suing the company.

Workers and organizers stressed that the disasters at both the MCP factory and Amazon facility should prompt serious improvements to workplace safety.

“We don’t want to see this again,” said Ceniceros. “There should be protections for workers to be able to speak up for themselves without fear of retaliation, and they should be able to organize as well. Workers have that right. We need to hold Amazon and all these other companies accountable.”