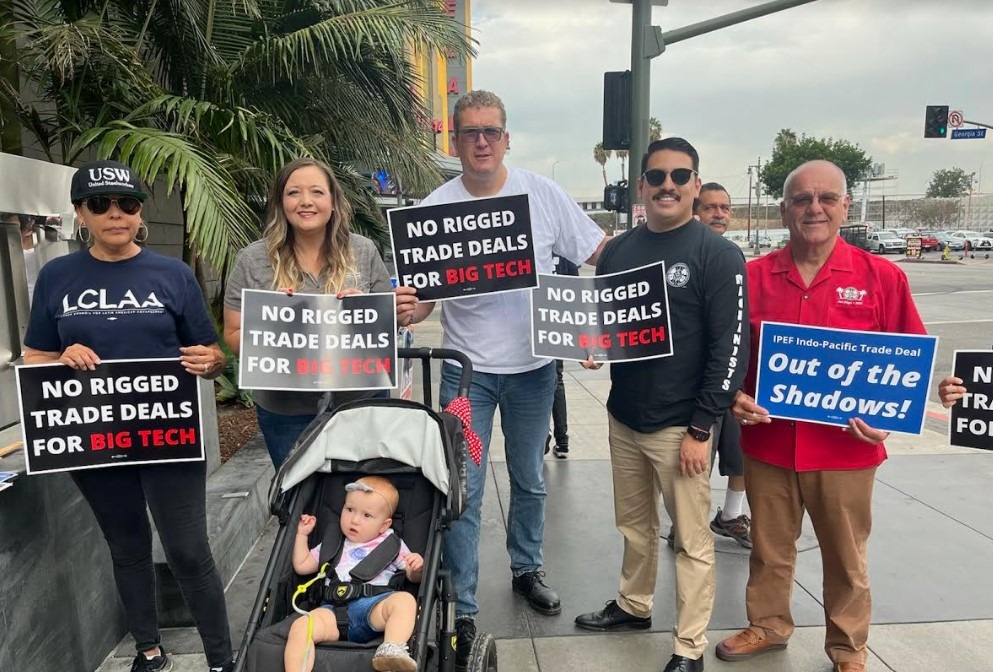 Los Angeles, California – As trade ministers from fourteen countries meet in Los Angeles today for behind-closed-door negotiations on the new Indo-Pacific Economic Framework (IPEF) trade agreement, labor and other civil society organizations rallied outside urging that proposals for the pact be released for public scrutiny and that the deal not be rigged in favor of Big Tech monopolies and other corporate interests.

“Our message today is very simple: the public deserves the right to know what IPEF negotiators are proposing in our names,” said Will Jamil Wiltschko, director of the California Trade Justice Coalition, which helped organize the demonstration. “In past trade negotiations, hundreds of corporate lobbyists have been given privileged access to draft texts and to negotiators, while the public was shut out — an unfair process that’s accelerated a global race to the bottom for working people and the environment.  Delivering a sustainable new, worker-centered trade model requires real transparency.”

Among the proposed IPEF deal’s many expected chapters, at least one is expected to focus on “digital trade.” The issue received special attention from rally participants, many of whom carried signs with the slogan “No Rigged Trade Deals for Big Tech.”

“At a time when policymakers are finally starting to pay attention to the oversized role that Big Tech has over our economy and our society, these companies want to use IPEF to block new regulations that put the interests of consumers, gig economy workers and communities ahead of their massive profits,” said Jamil Wiltscko. “A back-room negotiating process works in Big Tech’s favor and against virtually everyone else.”

Other speakers at the rally focused on the abysmal labor standards in many of the countries in the IPEF negotiations, questioning whether governments failing to take action on human trafficking and forced labor were appropriate partners for a new trade pact.

“The Philippines’ atrocious track-record of violence against union organizers makes the country a wildly inappropriate partner for what’s supposed to be a new ‘worker-centered’ trade deal,” said Kenny Williams, Executive Vice President of CWA Local 9510. “Numerous Californians lost their jobs recently when AT&T closed its call center in San Diego and moved the work to the Philippines. We can’t make it even easier for companies to move jobs there.  Until the Filipino government demonstrates it will uphold worker rights, the country should not be allowed in the Indo-Pacific Economic Framework or any other trade agreement.”

One rally speaker discussed the need for trade agreements to do a better job addressing climate change, and delivered requests from thousands of Americans for any ultimate IPEF deal to include a “Climate Peace Clause” under which countries agree not to use the pact or any other trade agreement to attack one another’s green jobs initiatives and other climate policies.

“While California passed nine climate bills last week and Congress passed the Inflation Reduction Act, which covers 80 percent of President Biden’s emissions goals, not a single U.S. trade agreement even mentions the term ‘climate change,’” said Samuel Sukaton, a local environmentalist. “Insofar as IPEF moves forward, a Climate Peace Clause would be an important step in the right direction.  We want a transparent negotiating process so that IPEF puts the interests of people and the planet ahead of big corporations. Our states and our Congress are turning toward climate action with new resolve. Our foreign envoys and trade negotiators need to face the world with the same commitment.”