Labor Strikes Back: How Workers Can Win

What does the current strike wave portend? Why is it important? What does it mean for the progressive left agenda in the United States?

In mid-June, the Washington DC chapter of Democratic Socialists of America (DSA) hosted a panel discussion, “Labor Strikes Back!”, to answer these questions. The discussion was moderated by Gabriel Acevero, union organizer and Member of the Maryland House of Delegates, and featured comments by Andrea Molina, educator and organizer at the Mundo Verde Charter School in Washington, DC; Eric Blanc, former teacher and author of Red State Revolt; and Sara Nelson, President of the Association of Flight Attendants. Given that the most consequential strikes of 2018 and 2019 have been by teachers, it was enlightening to have current and former teacher-activists on the panel along with other labor organizers.

In her remarks, public charter school teacher Andrea Molina talked about the challenges and risks of being an activist educator and an advocate for students in Washington, DC, where many are immigrants from Central America. She noted that a colleague of hers had been fired for asking for smaller class sizes and her own attempts to organize teachers at the school were met by administrative opposition. It was particularly difficult for her to get teachers to unionize because many of them were also immigrants and loathe to speak up. In the United States, with its ever more punishing immigration regime, the last thing any immigrant wants to do is to draw attention to her or himself. For these teachers, joining the union took courage and solidarity.

Nonetheless, after a difficult campaign, Molina and her colleagues were able to win a union, voting more than three to one to join the District of Columbia Alliance of Charter Teachers and Staff. Molina summed up her colleagues’ efforts by emphasizing that “democracy starts in the workplace” and that “solidarity means everyone supports the right for workers to strike,” everyone referring to families and other members of the community.

In his comments, Eric Blanc expanded the focus to educator strikes more broadly and to the importance of labor in the current political moment. He observed that the hundreds of thousands of teachers who walked off their jobs in 2018, either for single- or multi-day strikes, had changed the narrative nation-wide about teachers. Whereas teachers had previously been portrayed as a special interest group that was failing students, the walkouts very clearly put the challenges facing educators in front of the American people. It was the actions themselves that helped people understand the problems and radically changed public perceptions.

In his presentation, Blanc drew four lessons from the recent strikes. First, teachers won because they were fighting for the working class as a whole. All of the teacher strikes repeatedly made it clear that they were concerned foremost for the students and families in their communities. They also included support staff in the schools – for example, custodians, cooks, bus drivers – and sometimes other public sector workers in their demands and in their campaigns. In turn, they received large support from members of the wider community. As Blanc indicated in his book, this community support made it possible for teachers to stand up to attempted intimidation from public officials.

Blanc’s second lesson was that to win, the teachers had no choice but to break the law, because labor law is “stacked against workers.” In most states, red or blue, it is illegal for teachers to strike and organizing a union in the face of management opposition is always difficult as Molina indicated in her remarks. All of the teachers who went on strike in 2018, as well as those in 2019, took a huge risk. But, in Blanc’s words, “without strikes, our side will continue to lose.” Teachers, even in states with no culture of union activism, realized the truth of that sentiment. They also learned about the power of solidarity, that “if we all go out together, they can’t fire us.”

Blanc’s third lesson was that to overcome the challenges inherent in the legal framework for labor and political opposition in Republican-controlled states, teachers had to do a lot of organizing in order to build overwhelming support for the radical act of shutting down schools. This organizing was led by what Blanc has identified as a “militant minority.” As he described in “Red State Revolt,” in both West Virginia and Arizona, a cadre of activists – some of whom were members of DSA – were inspired by the Bernie Sanders campaign of 2016.

The fourth lesson is that, on a broader level, the strikes were a successful challenge to the “scarcity narrative” that has prevailed for decades in the U.S. – the idea that there are not enough resources to invest in things like education, affordable housing, and a clean environment. The reality, of course, is that there are plenty of such resources, but they are monopolized by billionaires and corporations that are not contributing their fair share to the economy.

Blanc noted that the Los Angeles teachers developed compelling presentations about the economics of education that helped gain support for their critical messaging about billionaires, who were influential in state and local government and have been promoting charter schools in local and state politics.

In conclusion, Blanc stated that “we live in an extremely scary moment,” but a very exciting one at the same time, because the potential to put class and socialist politics together is becoming ever greater through the efforts of unions and political activists. The conceptual trick for progressive forces is to recognize that, in addition to the left-right split in the United States, there is a top-bottom split. There is a latent anger about the state of the economy among people at the bottom that must be mobilized and organized to realize major transformations in the economy to benefit everyone, not just the top one or two percent. By acting collectively, teachers and other workers are showing the way towards a new kind of grassroots politics that is a critical component of any attempt to transform the economy.

Blanc was followed by Sara Nelson, who spoke on the importance of unions in protecting workers’ rights and pushing for progressive change. Nelson explained how her own experience as a new flight attendant was formative in the development of her labor activism. After missing two paychecks and getting the run-around from the airline bureaucracy, she was approached by another worker with a check for $800 to tide her over and urged her to “call the union.” She did just that and her paychecks materialized the next day. That experience spurred Nelson into the union activism that led to where she is today as one of the most militant union leaders on the national stage.

This militancy was on display nationally during the government shutdown in December and January. As the shutdown dragged on, TSA and air traffic controllers became increasingly exhausted and started to call in sick in growing numbers. As the crisis intensified, Nelson, who had called for a general strike at an AFL-CIO meeting a few days earlier, stepped forward, stating publicly that the entire air traffic system was becoming unsafe and was on the verge of collapse. She stressed that the flight attendants were ready to strike.

Soon after, the Republicans in Congress and the president agreed to end the shutdown. In her remarks at the DSA discussion, Nelson held up her thumb and first finger an inch apart and said “we were this close to shutting it all down.” Those in attendance were electrified. 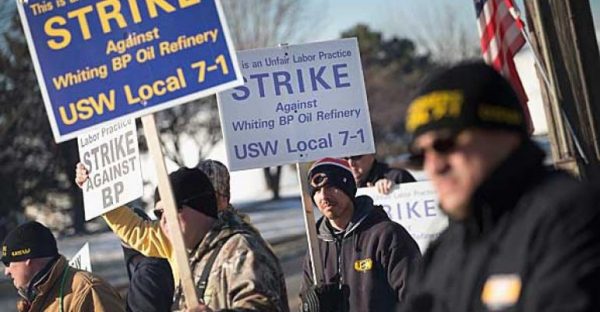 Strikes have been in Nelson’s and the flight attendants’ toolbox for some time. Several years ago, they began using a tactic they called CHAOS (Create Havoc Around Our System) in which strikes would take place at a limited number of airports, causing significant disruptions, while preventing airline managers from being able to plan ahead. As Nelson indicated in her remarks, it is a tactic that requires the union to be “really solid” because a few workers could find themselves alone on a picket line.

Nelson’s political outlook extends beyond representing her union. As she explained, during the shutdown, she encouraged the labor movement as a whole to stand up, telling them that “you have the power” to take dramatic action. This call stemmed from her conviction that all unions and working people must stand together if they are to make an America that works for working people. The threat of a general strike was saying “we want a better America.”

In the discussion period, the panel took on the relationship between organized labor and the Left in the U.S. with particular reference to the 2020 elections. Acevero, the moderator, observed that union leadership often does not fully represent the rank and file. Blanc insisted that building a strong labor movement that could transform politics required organizing that would transform the unions that are exclusively service-oriented and unwilling to challenge the status quo. Given the labor activism by teachers and others over the past two years, there is a clear opportunity to build a “mass movement from below” to make these changes and to bring a bottom (99 percent) versus top (1 percent) progressive strategy to the 2020 elections.