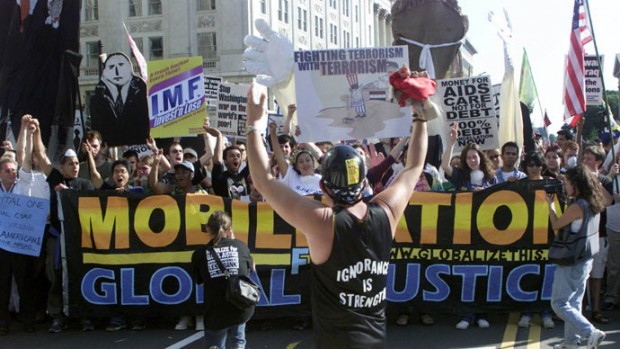 Landmark Settlement In DC Will Improve Policing Of Protests

After more than 12 years of class-action litigation, the Partnership for Civil Justice Fund (PCJF) has reached an unprecedented settlement with the Justice Department and the Department of the Interior that will significantly change the handling of mass protests. Presiding Judge Emmet G. Sullivan of the U.S. District Court for the District of Columbia has issued preliminary approval for the settlement.

This settlement is a major victory for First Amendment rights, and it comes at a time when the nation’s attention is riveted on the issue of police misconduct and government responses to mass protests.

The PCJF’s litigation was brought on behalf of a class of nearly 400 people arrested in Pershing Park, Washington, D.C., in September 2002 and follows a major settlement reached in 2010 in this matter with the District of Columbia police department.

“Although many media pundits and politicians have suggested that the social justice movement and the free speech and assembly rights of protesters have to be constricted for the sake of security and order, this settlement disproves that myth,” stated Mara Verheyden-Hilliard, PCJF Executive Director. “There is simply no basis by which any other jurisdiction’s police department can legitimately claim it cannot enact these procedural standards that conform to fundamental constitutional requirements.”

As part of the Settlement Agreement, the U.S. Park Police, which is responsible for the areas directly in front of the White House among other key security sites, has agreed to significant and substantive reforms in its policies and procedures in handling First Amendment activities.

“All the recent protest movements — the anti-globalization, anti-war, Occupy Wall Street and Black Lives Matter movements — have faced unconstitutional mass arrests. The reforms in this settlement take aim at the recurrent problem of police, without proper warning and notice, suddenly rounding up, trapping and arresting demonstration groups. If these reforms can be enacted here in the Nation’s Capital, they can and should be implemented in cities across the nation,” said Carl Messineo, PCJF Legal Director.

The new policies include: generally prohibiting the use of police lines to encircle protesters and demonstrations; requiring particularized probable cause for any protester to be arrested; providing fair notice and at least three warnings to disperse assembled groups prior to any lawful arrests rather than engaging in group sweeps; identifying avenues of exit for protesters to comply with dispersal orders and ensuring that such warnings are clocked at least two minutes apart, and are audible throughout the crowd.

The Agreement also requires that in any mutual aid or interagency action the same obligations are still followed by the U.S. Park Police regardless of whether another law enforcement agency is initiating action against demonstrators.

A Joint Memorandum signed by the PCJF and the U.S. Attorney’s Office describes these reforms as “a model of ‘best practices’ for law enforcement.” If the police agencies of the Nation’s Capital, with its significant security considerations and complex jurisdictional challenges, can establish clear police procedures to respect First Amendment rights and mass protests there is no reason any other city cannot do the same. These procedures prohibit kettling and confining protests within police lines as well as prohibiting mass sweeping arrests of demonstrators.

The Joint Memorandum explains further that this settlement “combined with the relief obtained through other First Amendment litigation in the District by Class Counsel [the PCJF], as well as the District’s enactment of the landmark First Amendment Rights and Police Standards Act, places the Nation’s Capital at the forefront of balancing the needs of law enforcement with respect for cherished First Amendment rights.”

The 12-year litigation followed the arrest of nearly 400 protesters, tourists, bystanders, legal observers as passers-by on the morning of September 27, 2002. The D.C. Metropolitan Police Department, working with the U.S. Park Police, encircled Pershing Park, refused to let anyone leave and then mass arrested everyone who happened to be present and trapped by law enforcement in the park. Many were held bound wrist to ankle in stress-and-duress positions on a police gym floor for upwards of 24 hours.

Notably, this massive violation of constitutional rights by the D.C. MPD was carried out under the command of Chief Charles H. Ramsey, who presided at the scene of the illegal mass arrests, and who has now been appointed to President Obama’s Task Force on 21st Century Policing.

The first settlement between the PCJF and the District of Columbia totaled approximately $8.25 million, providing eligible arrestees with up to $18,000 each. The current settlement with Federal agencies — including the Department of the Interior, which oversees the Park Police — totals $2.2 million and will add additionally up to $5,000 for eligible arrestees.

As part of the PCJF’s earlier litigation of this matter, all arrests were declared null and void and as part of the Proposed Settlement, the FBI will take additional steps to ensure that the arrests are fully expunged across criminal justice databases.

The Joint Memorandum of Points and Authorities filed in support of the preliminary approval of this settlement can be read here.

This case in the U.S. District Court for the District of Columbia is titledBarham, et al., v. Ramsey, et al. (Case No. 02-CV-02283). More information can be obtained at www.PershingParkSettlement.com.

Please make an urgently needed donation today to continue the ground-breaking work of the Partnership for Civil Justice Fund.