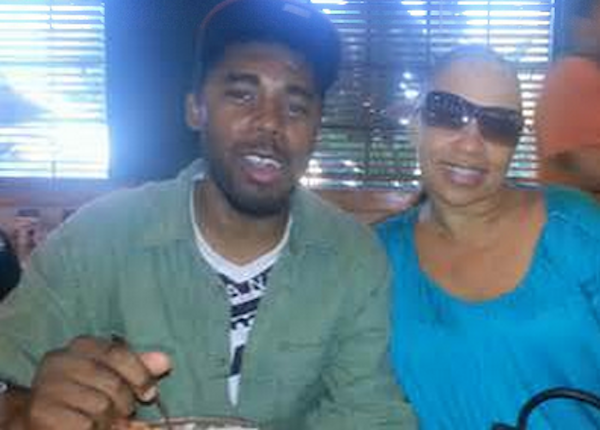 (TheAntiMedia) LOS ANGELES, CA – Around the block from where Ezell Ford was killed by LAPD, officers from the Newton Division stopped, Brandon Dawson, 26, on Sunday evening. Dawson had just finished his shift as a dental assistant and was picking up his seven-month-old daughter from his grandmother’s house. He was strapping the baby’s carrier into the car when officers stopped Brandon asking why Brandon had parked in the private driveway. Brandon explained that there were no other spaces available and he had just pulled up to pick up his daughter.

The police asked for no papers, and told Brandon to put his hands up as they snatched the father’s baby. Soon after, Brandon would be tazered, beaten, and arrested by police on suspicion of assaulting a gang officer from LAPD’s Newton Division, according to Officer Lilliana Preciado. However, Officer Preciado claims not to have any details regarding what led to Dawson’s arrest.

An eyewitness on the scene that asked not to be identified or recorded (due to police terrorizing members of low income communities that call for police accountability) witnessed the confrontation between Dawson and LAPD. A witness who says that after LAPD snatched the baby from Brandon’s arms, an officer began violently shaking the seven-month-old back and forth as if they were intentionally trying to make the baby fly out of the carrier.

“My baby! My baby!” screamed Brandon. LAPD then put the infant on the sidewalk. Alone.

A concerned woman tried to grab the baby, and a police officer slammed the door on her. Upset, Brandon’s grandmother came and took her grandchild from the sidewalk. Ten cop cars soon pulled up. Police officers piled on top of Brandon, tazering and beating him. A beating that was recorded on video that has yet to be released. Witnesses and angry community members surrounded the officers recording the police. Police told witnesses to stop recording, but community members continued tofilm the police anyway.  Police responded to by taking photos of those recording them. A tactic that police use to intimidate community members, which was accompanied with threats of arrest and deportation according to the witness.

Upset, community members gathered calling police out, “He did nothing to nobody.” “They (police) threw his baby.”

The community response was caught on tape by Ceebo Tha Rapper. Ceebo has been organizing the neighborhood and recording music about police brutality ever since the same police department killed his cousin, Ezell Ford. However, as the community filmed, police swiftly formed a line. With hands resting on their guns, officers aggressively push the crowd back in the video as community members remind police, “We’re unarmed.” This incident which began as a traffic stop between 7-8 pm, had 65th & Broadway sealed off and occupied by a small army of LAPD until midnight.

Following Brandon’s arrest, his mother, Linda Washington, was shocked when she received a call from her sister. She had just gotten off the phone with her son. He had called to say goodnight and ask how her day was. “(My) sister called saying I needed to come down because something happened with Brandon and the police.” Mrs. Washington didn’t believe her at first. After all, it was only minutes ago that Brandon was fine and now suddenly, her family was thrust into an emergency.

Given the wrong information several times by police, Mrs. Washington says she had to do a lot of running around just to locate Brandon and his impounded vehicle. Out on $50,000 bail, Brandon is being treated at the hospital. He has injuries and scars on his neck, forehead, and wrist from being beaten by LAPD. To make matters worse, Brandon’s wallet containing $1,200 for his rent, was inside his car. Both the wallet and his rent money are now gone. According to witnesses, Brandon’s vehicle was driven away by a police officer, not a tow truck.

This seems to be about more than a traffic stop, according to Mrs. Washington. One of the officer’s recognized Brandon from two years ago when they had stopped and arrested him in the very same place destroying his pending opportunity to join the marines as an officer on Monday night reminded Brandon: “You thought you were going to the Marines last time.”

Washington asked regarding LAPD immediately using force on her son:

This is a young boy with a baby in the car. And it’s obvious, he’s got on work clothes. What harm is he doing?

Residents of Brandon Dawson’s grandmother’s building and his Mom portray Branson as a sweet, hardworking young father who is not involved with gangs or drugs. In fact, the only other problem Brandon has ever had with police was two years ago in the same place by 65th and Broadway with the notorious Shootin’ Newton Department.

Concerned about the psychological affects police targeting may have, Mrs. Washington remains determined to support her son.

What happens if every time you take two steps forward someone pushes you two steps backward? Once the police come at you, you’re almost tagged… It’s almost as if they intentionally want to get him to the point to get him locked up.

They’re racist against the black and latino community. They insult us. They humiliate us. They belittle us.

Statistics back up these sentiments regarding police targeting and racist policing.

According to the NAACP:

The Newton Police Department has been under fire from community members since August when officers from the department killed unarmed Ezell Ford nine days after they killed unarmed Omar Abrego. Regular demonstrations demanding justice for Ford and Abrego and an end to police brutality have been ongoing, but have yet to be met with any response other than force from the Newton Police Department. All of this of course occurring while those rallying for #FergusonOctober are making it look like there will either be justice against racist killer cops or revolution in America. Unfortunately, one more family impacted by police brutality may be joining efforts to stop killer cops and end police brutality. Washington says her family hopes to attend the October 22nd day of national action against police brutality in Los Angeles.