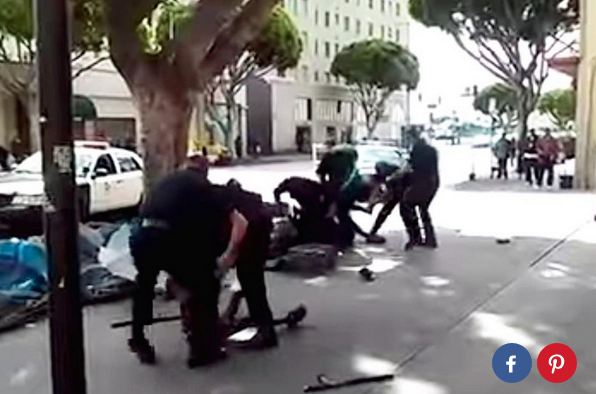 Five months after the March 1 Los Angeles police killing of an unarmed black man named Charly “Africa” Keunang—a story I reported in-depth for the July issue of GQ—the Los Angeles coroner has finally released the results of its autopsy. They are profoundly disturbing. Two of the six bullets that killed Charly entered his body through what are called “contact gunshot wounds”—which means the muzzle of the officer’s gun was pressed directly against Charly’s body. Like a slaughterhouse killing.

I’d already reviewed a less-detailed autopsy report commissioned privately by Keunang’s family and had access to leaked body-cam videos and recordings of internal police interviews with several of the officers involved. Even so, the autopsy report is startling.

There’s a moment in the body-cam video when it appears to me that Officer Francisco Martinez has his hand on Charly’s torso—Charly is on his back after having been wrestled down and tased—with his gun pointed at the body. I didn’t include that detail in my story because I couldn’t be absolutely certain. We still can’t be sure Officer Martinez’s hand is holding Charly down, but now we can be certain: He pressed his gun into the chest of an unarmed man who was lying on his back and pulled the trigger.

Gunshot wounds #2 and #3, reads the report—the shots are listed arbitrarily—are described as “penetrating, fatal.” One bullet entered above Charly’s right nipple, the other close to the center of his chest. “Yellow gunpowder is present on the skin” in both cases; “soot is present in the wound.” Three examiners, including the chief medical examiner-coroner, inspected these two wounds in particular, and the three examiners concurred: “Range of fire: This is a contact gunshot wound.” Not “point-blank,” the distance at which you can’t miss, which is as much as several feet; contact. The gun pressed into the body, the bullets traveling directly from the barrel into the flesh, no distance in between.

So we add to what we know one more terrible detail. On March 1, 2015, Officers Martinez and Volasgis confronted Charly, who was unarmed. “Let me express myself, Martinez,” said Charly, trying to reason with the officer, but Martinez would not, and he tased Charly, and several officers tackled Charly to the ground and hit him several more times with a Taser pressed directly to the body. Officer Volasgis said—incorrectly, of that we must be clear—”He has my gun.” He says that he was straddling Charly, and that Charly only let go of his gun after he’d been shot; but the body-cam video, on which we cannot see Charly reach for the gun, shows Officer Volasgis is already on his way to standing at the moment the first shot is fired, his holstered gun beyond Charly’s reach. Officer Martinez pushed his 40-caliber Glock 35 directly into Charly’s body—hard muzzle pressing down into the flesh—and fired.

That is: Officer Francisco Martinez pressed his gun into the chest of an unarmed man and shot him through the heart.

It took five months for the L.A. coroner to reveal this final, awful fact. The investigation is “ongoing,” according to the LAPD’s local paper, theL.A. Times, which led its coverage of the autopsy with the news that police shot Charly six times and that there was meth in his system—both facts previously reported here in GQ. In a media narrative now familiar from responses to the police killings of Michael Brown to Freddie Gray, the L.A. Times devotes more ink to the effects of small amounts of meth and marijuana than to the effects of a police officer pressing his gun directly into Charly’s chest and pulling the trigger. Weed isn’t news. On Skid Row, meth isn’t news. The news from the inquest is that of the gun against the flesh. The coroner’s office, reportedly citing toxicology tests—the family’s autopsy found the same results in a matter of weeks—made us wait five months for this awful fact. How long will it take for the L.A. district attorney to respond?