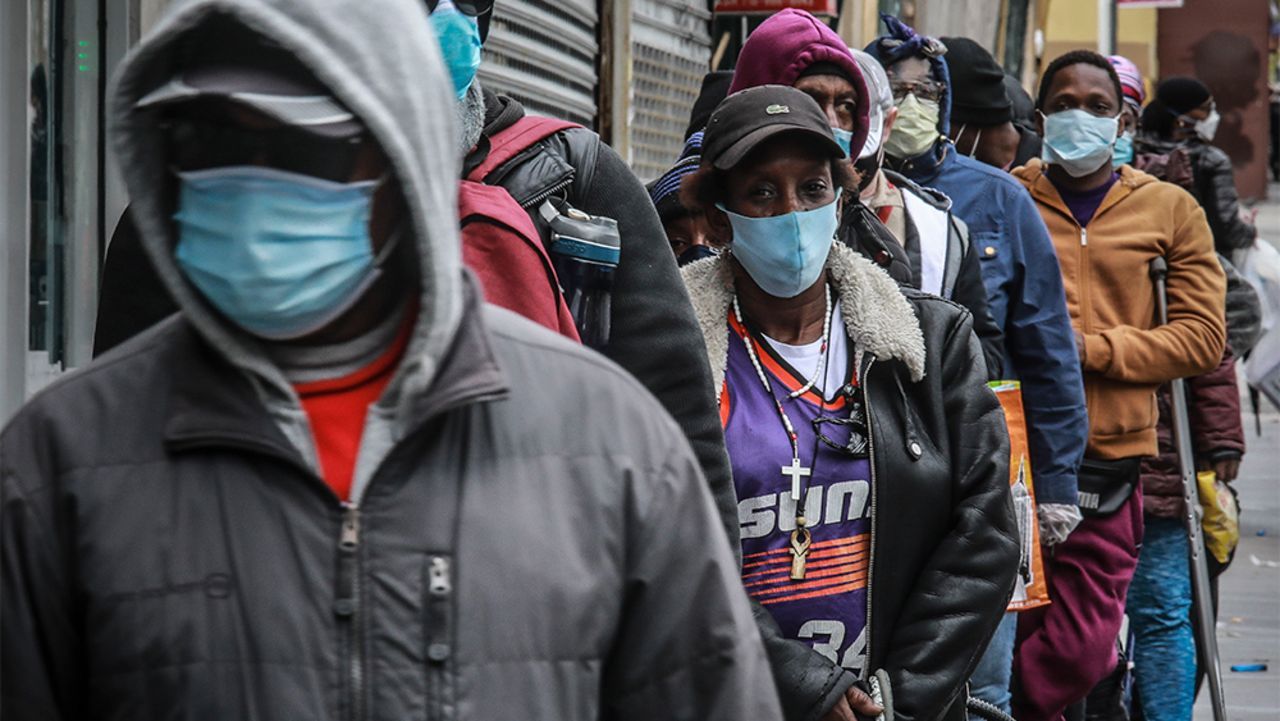 Large Numbers Of People Still Filing For Unemployment Each Week

Above photo: People wait for a distribution of food in the Harlem neighborhood of New York, April 18, 2020. AP Photo/Bebeto Matthews.

For the 34th straight week, over 700,000 people filed for unemployment in the US according to the Department of Labor’s latest report. The 709,000 state claims coupled with an additional 298,154 initial claims for Pandemic Unemployment Assistance brings the weekly total once again to over 1 million new claims.

Nearly 67 million claims have been filed since mid-March as the worst economic crisis to befall the working class in the United States since the Great Depression of the 1930s leaves millions on the brink of destitution. While the 709,000 marks a slight reduction from the previous week’s nearly 755,000 claims, the staggering figure is still three times higher than the pre-pandemic average, exemplifying the ongoing job apocalypse that has decimated workers, particularly in entertainment, hospitality, education and transportation sectors.

Telecommunications giant AT&T, which posted over $42.3 billion in revenue in the third quarter of this year, announced possibly “thousands” of layoffs in North America as part of a “restructure” of its WarnerMedia division this week. A company spokesman declined to state the exact number to the Wall Street Journal, but indicated that over 1,000, and up to 2,000, out of the company’s 25,000 workers will be fired. News of the mass layoffs sent shares of AT&T up nearly 2 percent as the financial oligarchy continues to enrich itself off desperation and death.

Even as layoffs continue, unemployment benefits are expiring for millions. For the week ending Oct. 24, a total of 21,157,111 people were receiving some form of assistance, a drop of roughly 375,000 people from the previous week. While a small number of those dropped off due to finding work, for the majority it is simply a matter of running out of state unemployment benefits which for most is capped at 26 weeks, although several states such as Florida and North Carolina limit the number of regular unemployment payments to a mere 12 weeks.

While the official national unemployment rate is now 6.9 percent—a gross underestimation of the true extent of joblessness—several states are much higher with Hawaii leading the country at 9.9 percent. This is followed by California at 8.9 percent; New Mexico, 8.5 percent; Nevada, 8.2 percent, while Massachusetts is at 7.0 percent. In Los Angeles and Las Vegas, cities heavily reliant on entertainment, travel and dining, the unemployment rate is at 15.1 and 14.8 percent, respectively.

However the job losses in Nevada are not just due to the lack of tourism. Previewing the austerity measures teachers and students can expect under a Biden administration, massive cuts in education funding were rammed through a Democratic-controlled legislature and signed by Democratic Governor Steve Sisolak in a special session in July. The $160 million in cuts led to a nearly 20 percent reduction in public education jobs compared to 2019, representing roughly 10,900 fewer teachers and support staff, according to the Pew Research Center.

While Nevada has the highest percentage reduction in education jobs out of all US states, nearly every state, except for North Dakota and Utah, recorded year-to-year reductions in public education workers. Pew estimates that overall state and local education employment in the US is down 8.8 percent compared to October the previous year. Florida, West Virginia, New York, Maine and California have all posted double digit percentage reductions in education jobs, with California shedding over 100,000 public education workers compared to the year before.

Officially 25.7 million people are considered “temporarily” laid off, unemployed or have seen a reduction in hours or pay since the pandemic has begun. The Economic Policy Institute estimates that due to job losses and reductions in hours, over 12 million people have lost their employee-based health insurance.

The historic job losses are compounded by the current out-of-control spread of the coronavirus in the US, which is mirrored internationally as capitalist governments have embraced a genocidal policy of “herd immunity.” Eschewing lockdowns and financial assistance to workers, small businesses and their families, the “back to work” and “back to school” policies championed by Democratic and Republican governors alike have led to over 248,000 deaths in the US while millions of jobs have been lost and will never return.

It has been 15 weeks since unemployed workers last received the $600 enhanced federal unemployment benefit, included as part of the misnamed $2.2 trillion CARES Act Wall Street bailout passed at the end of March. By December 26, two federal programs, the Pandemic Unemployment Assistance program and Pandemic Emergency Unemployment Compensation, will expire, leaving some 13.6 million workers, an overwhelming majority of whom have already used up their state benefits, with nothing. The end of the year will also see the expiration of the Centers for Disease Control and Prevention’s limited eviction moratorium, although this hasn’t prevented some mayors, like Miami-Dade’s Carlos Gimenez, from resuming evictions, which he announced would begin again today.

In what has become commonplace in the richest country on the planet, food lines continue to snake around blocks in large cities and rural communities alike. The latest Household Pulse survey data collected by the US Census Bureau from October 14 to October 26 found that nearly 11 percent of US adults, 24 million people, reported that their household sometimes or often did not have enough food to eat within the last week, a more than 7 percent increase from the same period last year.

Despite the disastrous situation facing millions of workers and families, through no fault of their own, the US government and the two parties of capital have no plans to pass much needed relief.

“Hopefully we can get past the impasse we’ve had now for four or five months and get serious,” Republican Senate Majority Leader Mitch McConnell said on Thursday. McConnell has been appointed by the Trump White House to lead coronavirus relief negotiations during the lame-duck session in November and December.

On Friday, Democratic House Speaker Nancy Pelosi, in between hosting a dinner party for new members of Congress, gave another half-hearted call for “negotiations” with Republicans on a stimulus bill using the $2.2 trillion Heroes Act as the baseline for negotiations. The massive bill was shot down by McConnell months ago and has no chance of being passed, even in a Biden administration.

Their opposition to passing meaningful relief is contrasted with the speed the two parties exhibited in passing funding for the US Postal Service prior to the election, revealing the charade of the so-called “negotiation” process. This same duplicity is echoed in Biden’s declarations to “follow the science” in regards to the pandemic, while refusing to support the closure of non-essential factories and schools to control the spread of the coronavirus. In both cases the response of the Democratic Party is guided by the financial concerns of the ruling class, not the health and safety of the population.

The decisive factor in ending the pandemic and reorganizing society on human need, not private profit, remains the independent intervention of the working class fighting for socialism.