Olympia, WA – On November 28th, the Washington State Energy Facility Site Evaluation Council dealt a major blow to a proposed massive oil-by-rail terminal along the Columbia river along the Washington and Oregon borders.

The council voted unanimously to “recommended disapproval of Vancouver Energy application’s to build a crude-by-rail oil terminal at the Port of Vancouver.”

The council stated that, “developers had not met their burden to show that the proposed port of Vancouver site was acceptable.” High among concerns were derailments and explosions. In 2016, an oil train derailed along the Columbia river Gorge that promoted the evacuation in the town of Mosier Oregon.

The company, Vancouver Energy, has been seeking approval to build the nation’s largest oil-by-rail terminal at the Port of Vancouver. If built, the $210 million terminal would bring on average “360,000 barrels of oil per day from crude oil [from the Bakken Shale] unit trains into marine vessels in the Columbia River bound for refineries along the West Coast.”

The terminal has been widely opposed by cities, environmentalists and Columbia River Treaty tribes.

The council, who started its review process in 2013, was inundated with over 250,000 public comments with the bulk opposing the construction of the terminal.

This decision comes among a series of successful campaigns led by Tribe’s and environmentalists to stop proposed fossil fuel projects in the Northwest.

In January 2017, the Quinualt Nation led a successful campaign to stop proposed oil-by-rail terminals from being built in Grays Harbor. In the spring of 2016, the Lummi Nation helped lead a campaign to stop the construction of what would have been the largest coal export terminal in the nation. 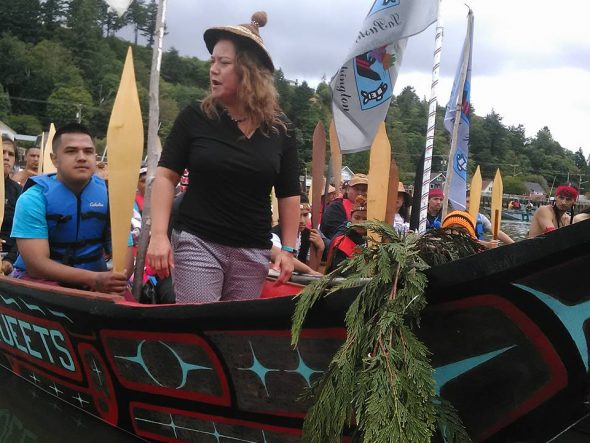 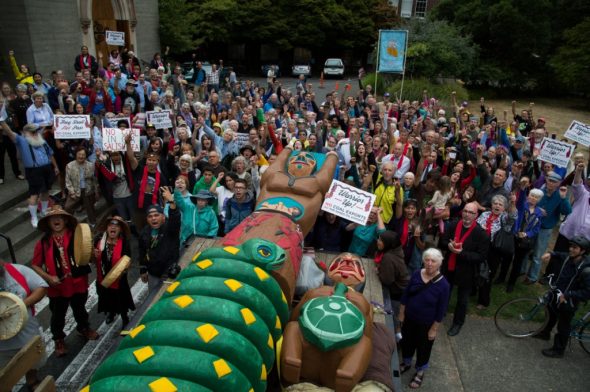 Healing pole carved by Jewell James (Lummi) traveled from South Dakota to Alberta Tar Sands to bring communities together in fight against coal and oil exports.

“The efforts coming out of the Northwest demonstrate that you can successfully merge the concerns of Tribe’s with environmentalists and local jurisdictions to craft successful campaigns to halt these treaty breaking, environmentally destruction fossil fuel projects. It can be exhausting, but it is absolutely critically, to be engaged in every step of the process to combat the fossil fuel industry.

They are relentless, but so are we, and we will remain vigilant and laser focused in protecting our lands, waters, treaty rights and well being of Earth.” ~Matt Remle co-founder Mazaska Talks 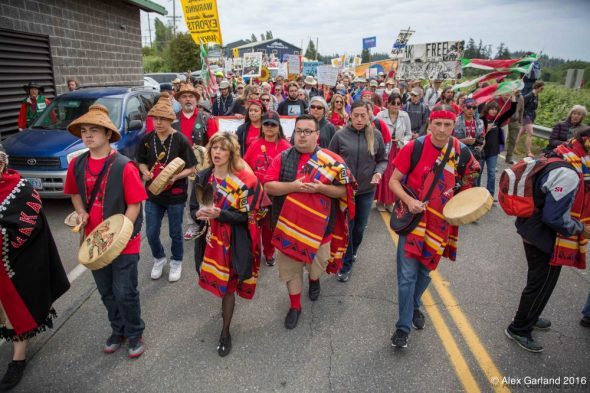