Largest Private Sector Strike In Years – At Supermarkets Across Northeast

Above photo: Cashiers and deli workers at Stop & Shop supermarkets walked off the job Thursday afternoon at 240 stores in Connecticut, Massachusetts, and Rhode Island. Boston Globe via Getty Images

More than 30,000 grocery store employees in the northeastern US are refusing to return to work for the second day in a row.

Cashiers and deli workers at Stop & Shop supermarkets walked off the job Thursday afternoon at 240 stores in Connecticut, Massachusetts, and Rhode Island, saying the supermarket chain is trying to slash their pay by hiking health insurance premiums and lowering pension benefits for new employees.

The workers have been negotiating new jobs contracts with the company since January, according to their labor unions, which are part of the United Food & Commercial Workers Union International. Workers want their paychecks to get larger, not smaller, they say, especially now that Stop & Shop’s profits are growing faster than before.

“They’re a billion-dollar company because of us,” one associate, who was picketing with coworkers outside a Stop & Shop in Middletown, Connecticut, said Friday in a video posted on Facebook by the local union. “We’re out here striking and protesting to show what’s fair and what’s right.”

The company offered across-the-board pay raises, but union reps say the jump in health care premiums and deductibles for employees would end up costing them more than they would get from any pay bump. Stop & Shop executives disagree, saying their latest proposal won’t increase deductibles, and that all workers will end up with larger paychecks.

Stop & Shop is the only major supermarket chain in the northeastern US with a largely unionized workforce. It’s owned by the Belgian-based company Ahold Delhaize, which also runs the Giant and Food Lion supermarket brands.

The company said in a statement that it’s disappointed that workers chose to carry out a stoppage to “disrupt service at our stores.” They argue that their offer, which includes bonuses and some pay raises, is reasonable, and that the union’s proposal would increase labor costs for the chain.

“This would make our company less competitive in the mostly non-union New England food retail marketplace,” the company wrote Thursday in an updated summary of contract negotiations.

The company said it’s prepared to keep stores open, but some have closed because they don’t have enough workers. In a show of support for striking employees, many customers have refused to cross the picket lines.

Arrived at my local grocery store with a long list and learned that the workers had just gone on strike. So I turned around and got back in the car. No way I’d cross that line. They are too good to me and my kids. Good luck on a fair resolution. #AlwaysFriendly #AlwaysHelpful

Within 24 hours, the Stop & Shop stoppage has become the largest private sector strike in at least three years, showing that last year’s labor unrest was not an isolated phenomenon.

A record number of US workers went on strike or stopped working in 2018 because of labor disputes with employers, according to data released in February by the US Bureau of Labor Statistics. A total of 485,000 employees were involved in major work stoppages last year — the highest number since 1986, when flight attendants, garbage collectors, and steelworkers walked off the job.

The increasing number of workers involved in labor strikes suggests that average Americans are not experiencing the “economic miracle” that President Donald Trump has described. They see the economy expanding and profits growing, but this doesn’t extend to their paychecks.

Frustrated teachers in West Virginia launched the first major strike of the year in January 2018. About 35,000 educators and staff walked off the job to protest an inadequate 1 percent pay raise. The stoppage ended up shutting down every public school in the state for a week until state lawmakers agreed to give them a 5 percent raise and to temporarily freeze health insurance premiums.

Teachers in six other states soon followed, and by the end of the year, Marriott workers were picketing in four states.

Working-class Americans haven’t been this fed up with their employers since the 1980s, as this chart shows: 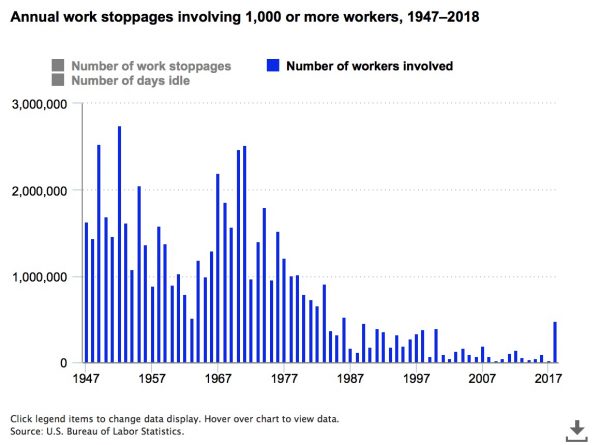 US Department of Labor

To be clear, not all 485,000 workers involved in the 2018 stoppages were on strike. That number includes people who couldn’t work because employers temporarily shut down operations during the walkouts. It also includes lockouts, in which an employer refuses to let workers do their jobs when they are involved in a contract dispute.

But nearly all of the 20 major work stoppages in 2018 involved massive labor strikes, which ended up boosting wages for thousands of workers.

The trend isn’t slowing down

The Stop & Shop strike is the latest sign that widespread worker angst isn’t subsiding. The supermarket stoppage is nearly as big as the strike that shut down all of West Virginia’s schools last year (25,000 teachers participated in that strike, compared to 31,000 grocery store workers now).

Earlier this year, in January, Los Angeles public school teachers ended a strike that shut down the nation’s second-largest school district for more than a week.

As part of their deal with city officials, teachers agreed to a 6 percent raise and slightly fewer students in each classroom, according to Alex Caputo-Pearl, president of United Teachers Los Angeles, a labor union that represents about 34,000 public school teachers, nurses, librarians, and support staff in the city.

And more than 2,000 teachers in Denver went on strike in February for the first time in 25 years. Educators want the school district to overhaul the compensation system, which relies heavily on bonuses that fluctuate wildly from year to year.

It’s unclear when Stop & Shop employees will return to work, but they don’t seem too worried. State lawmakers, members of Congress, and 2020 Democratic presidential candidates, such as Sens. Elizabeth Warren and Bernie Sanders, have all pledged their support for the striking workers.