Above photo: Amazon employees hold a protest and walkout over conditions at the company’s Staten Island distribution facility on March 30, 2020 in New York City. On Tuesday, hundreds of workers at the ecommerce giant Amazon called in sick in the largest protest at the company since the coronavirus pandemic began.  Spencer Platt/Getty Images. 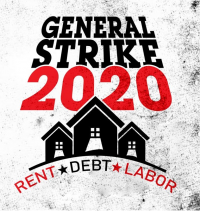 NOTE: Join the informational call on Wednesday, April 29 at 7:00 pm Eastern/4:00 pm Pacific to learn how to participate in and support #GeneralStrike2020. Register at bit.ly/MayDayMeeting.

Hundreds of Amazon workers from across the U.S. on Tuesday called in sick to demand better safety standards at the ecommerce giant’s warehouses in the largest coordinated action at the company since the coronavirus pandemic began.

The labor rights groups United for Respect, New York Communities for Change, and Make the Road New York organized the action. More than 300 employees joined the strike and refused to work.

More than 75 Amazon employees have tested positive for COVID-19, the disease caused by the coronavirus, in recent weeks as workers have sounded alarms about a lack of transparency and safety protocols at the company’s 110 U.S. warehouses.

Athena, a coalition of groups dedicated to fighting injustices at Amazon, called on Americans to demonstrate solidarity with the striking employees, who work in at least 50 of the company’s facilities throughout the country.

TODAY: 300+ @Amazon workers are calling out in a national mass action to protest unsafe working conditions during covid crisis + firing of whistleblowers. Join us in National Week of Action to #ProtectAmazonWorkers: SIGN THIS—>https://t.co/uO9zu81FUq RT to amplify! ✊#WeAreAthena pic.twitter.com/B8S9N8BRH3

Amazon warehouse workers in Chicago successfully pressured the company in March to allow seasonal and part-time workers to request paid time off. But the company only offers the paid sick leave to employees who have tested positive for COVID-19 or who have to quarantine because of confirmed exposure. The policy is making the number of coronavirus cases as Amazon “likely to exponentially increase,” experts say.

According to a report released last week by Athena and the Center for Popular Democracy, workers in Amazon warehouses are also facing mandatory overtime—which can cause overcrowding in the facilities—and the same quotas they normally face, forcing them to work quickly and making it difficult to practice hygiene that public health officials recommend, like frequent hand-washing. New York Communities for Change posted on Twitter a video featuring Jordan Flowers, a warehouse employee in Queens, New York, who shared why he called in sick Tuesday.

“We have 50+ COVID cases at our warehouse at JFK8, this not only puts us at risk, but our Familes, communities, customers at risk…that’s why I’m on strike and staying home” Jordan Flowers, Amazon JFK8 worker, on why he’s calling out today #AmazonStrike #ProtectAmazonWorkers pic.twitter.com/nve8KgO3V9

“We are putting our lives at risk, our communities at risk, our families at risk and…our customers at risk,” Flowers said. “We need Jeff Bezos to close down these warehouses and have us on two weeks paid leave.”

According to Flowers and his colleague at the Queens warehouse, Philip Ruiz, their facility has had more than 50 positive coronavirus cases.

Tuesday’s strike comes weeks after Chris Smalls, an Amazon worker in Staten Island, New York, was fired after organizing a protest over conditions at the warehouse.

“Today’s actions show just how dangerous it is to work at Amazon,” Stuart Appelbaum, president of the Retail, Wholesale and Department Store Union (RWDSU) said in a statement. “Workers have been desperately asking that Amazon do more to protect their health and safety at work. But instead of addressing their concerns Amazon has instead lashed out at worker leaders. This must stop. No worker should be subjected to unsafe conditions at work. And no worker should be retaliated against for standing up for their rights. Amazon continues to prioritize maximizing its enormous profits even over its employees’ safety—and that is unacceptable. Enough is enough, Amazon.”

On social media, other workers’ rights groups expressed solidarity with the workers.

ACTION ALERT: Show your solidarity with Amazon workers on the front lines! Amazon workers across the country are walking off the job today in a coordinated call out. Add your name and tell @JeffBezos to #ProtectAmazonWorkers NOW. https://t.co/Oau7Oz5G05

Amazon workers are taking action to protect us all from #COVID19 exposure. Support Amazon workers risking their jobs to stand up for public health–>DONATE to the Amazon Whistleblower Fund: https://t.co/0KW05x5UD6 #AmazonStrike #ProtectAmazonWorkers pic.twitter.com/KjW2k4oLNP

“Amazon workers are taking action to protect us all from COVID-19 exposure,” wrote digital rights group Fight for the Future, urging supporters to donate to a fund for whistleblowers at the company.

Note from Commondreams: In repeated emails to Common Dreams following the initial publication of this article, a public relations spokesperson for the company named Av Zammit refuted the complaints made by its frontline workers and called the charge of unsafe working conditions “completely false.”

“We encourage anyone to compare the health and safety measures Amazon has taken,” Zammit said, “and the speed of their implementation, during this crisis with other retailers.”