Above Photo: FREEDOM FIGHTERS: Women made up as many as 30 percent of the combatants at the height of Nicaragua’s 1979 Sandinista revolution that overthrew their country’s U.S.-backed dictator. Credit: Still from Women in Arms featured in ¡Las Sandinistas!. MCRM Productions/ITVS.

Las Sandinistas, a new feature-length documentary film that examines the Nicaraguan revolution of the 1980’s, arrives in theaters at a critical political juncture in which crises in Central America are once again center stage. Refugees streaming northward toward the U.S. border flee violence while the president calls them animals and sends army troops to meet them, threatening to shoot unarmed civilians. At such a moment, a film like this can offer a much-needed refresher course on the history and consequences of U.S. intervention in the hemisphere, helping us better understand the root causes that push those refugees to flee in the first place.

The film does this while providing us with the specific and critical perspective of female Sandinistas who are the protagonists of this story. It’s a point of view that has largely been excluded from official histories. This film generously provides a corrective, reminding us that women made up the majority of the Sandinista Front for National Liberation (FSLN) and as many as 30 percent of its combatants when the revolution triumphed in 1979. In telling us the story of the female Sandinistas, the filmmakers are in effect able to tackle two very important subjects simultaneously: the revolution itself, and what Dora María Tellez, one of the protagonists, refers to as “the revolution within the revolution.” 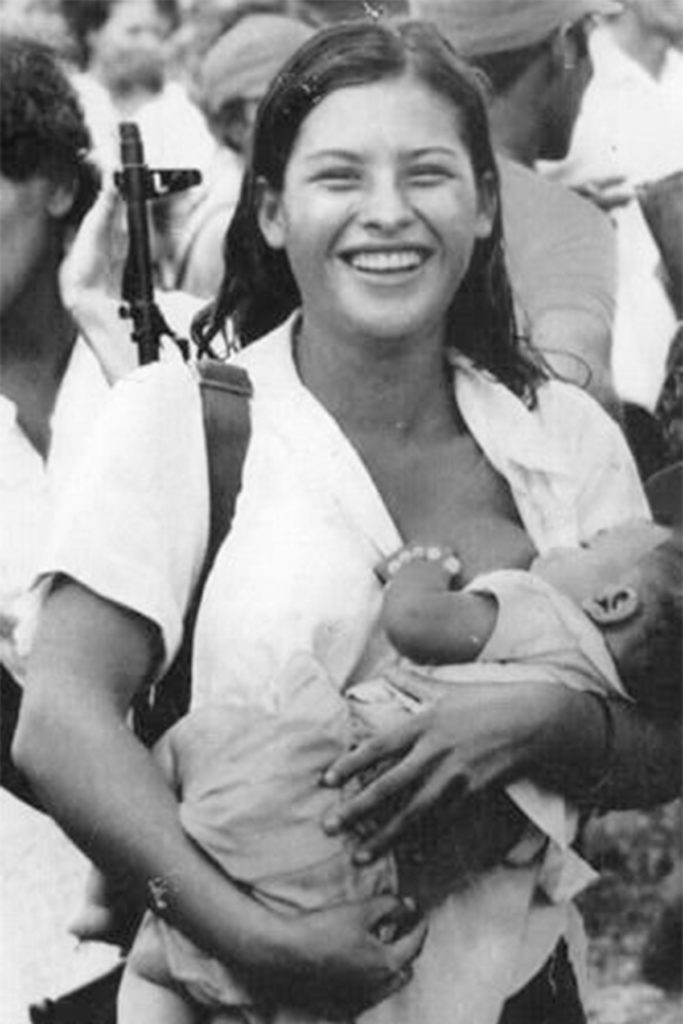 For anyone that came of age in the 1980s, the story of the Nicaraguan revolution and its ultimate unraveling is an emblematic tale of Cold War U.S. foreign policy and the heavy toll its anti-communist crusades took on Central America.  During the 1980s more than 200,000 people were killed in Nicaragua, El Salvador and Guatemala in dirty wars backed by the Reagan administration. U.S.-backed client states that routinely used torture, disappearances and extrajudicial executions to control their populations were seen as crucial allies. When people simply could not bear it anymore, they took up arms and went into the jungle to train for a guerrilla war. The same basic script played out in countries throughout the hemisphere.

This film puts us on the ground with a group of powerfully committed Nicaraguan women as they live through this history. Director Jenny Murray expertly weaves rare and revealing archival footage with deep interviews that sensitively explore what it felt like to participate in a revolutionary struggle for justice. I left the theater feeling as though I had been given a glimpse into a life that I secretly wish I could live myself — a life of unswerving purpose and profound commitment that these women lived fully and without regret. Just as importantly, these women lift the veil on the stubborn culture of machismo and sexism that pervaded the FSLN, despite its stated aspirations to fight for women’s equality. This contradiction arises again and again throughout their revolutionary careers and it extends into the current moment, where they continue to fight for women’s equality. They are an amazing group of women, with deep insights into the challenge of combating male supremacy while simultaneously attempting to overthrow a violent capitalist regime. This film is a valuable contribution to our understanding of revolutionary movements and the perils that come with adopting vanguardist — and thereby hierarchical — structures and strategies.

What is less clear, at least to this reviewer, is whether or not this film contributes to a better or worse understanding of what is happening in Nicaragua today. The political situation in Nicaragua is highly complex. With turmoil and violence engulfing that country this spring, there do not appear to be any clear-cut good guys.

Despite being voted out of power in 1991 (a defeat that many historians attribute to popular fatigue with a long-running war against an army of U.S.-backed mercenaries), the FSLN retained a great deal of popularity throughout the country due to the remarkable social progress it had achieved, especially in regards to public health and national literacy rates. In short, while the Sandinistas had been defeated by the United States, the people of Nicaragua still held very favorable views of them. In 2006, longtime FSLN leader Daniel Ortega was voted back into the presidency.

During Ortega’s second stint in power, the Nicaraguan economy has grown more rapidly than that of any of its Central American neighbors and the country experienced relative social peace compared to the unrelenting gang violence in other adjacent countries. Ortega was re-elected in 2012. Since then a growing number of Nicaraguans have chafed under his heavy-handed rule, including several prominent ex-Sandinistas who have denounced him. The women in this film fall squarely into that category. They are among the leading critics of Ortega’s rule.

In linking the unfair treatment of the women of the FSLN at the hands of male leaders such as Ortega to the current efforts to oust him from the presidency, the filmmakers come dangerously close to taking the side of U.S.-backed groups that seek to undermine the current government. While the filmmakers may not have intended to take a side in the current conflict, the film can be read as making the case that, while the Sandinista revolution was necessary and noble, the male leadership of that revolution — and Ortega specifically — lacked integrity and honesty and thereby betrayed the revolution, rendering the current government illegitimate. Given the prominent political role of the film’s protagonists, it is hard not to see it as an opposition film, which made this reviewer somewhat uncomfortable.

All that said, I would strongly recommend this film to anyone interested in Central American history, the revolutionary spirit, or radical feminism. It paints an amazingly detailed and intimate portrait of a revolution, which is a rare thing for a film to even attempt. It is definitely worth your time to go see this film, but I would advise some skepticism towards any conclusions the film might encourage in regards to what is happening in Nicaragua today.