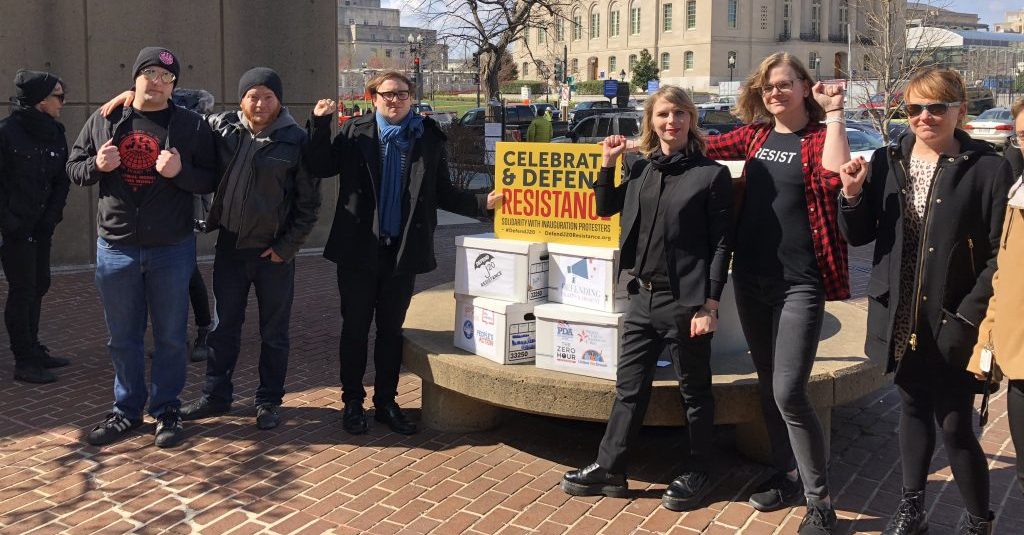 Above Photo: Chip Gibbons is joined by Chelsea Manning, members of J20 Resistance and Free Press on April 10, 2018

The government tried to set an example with a group of inauguration day protesters by harshly charging 230 people en masse with felonies, each facing decades in jail. The protests were one of many on the day of Donald Trump’s inauguration. In addition to those charged in this protest, there were protests at almost every entrance to the inauguration parade as well as a Festival of Resistance protesting the new president. The charges stemmed from what the police described as a “riot.” Hundreds of people were kettled by the police, including bystanders, reporters, legal observers and medics and charged with serious felonies. Out of the 230 people charged there was one felony plea, and no felony convictions by a jury.

Even though no one was found guilty of a felony by a jury, the trials were not without cost for those charged. Their lives were turned upside down for more than a year and they were under great stress. Michael A. Webermann, one of the defendants who had his charges dropped told HuffPost, “Obviously it’s a huge relief to have these charges dropped after an 18-month nightmare. However, it’s hard not to feel cynical about the enormous amount of power that prosecutors have to overcharge people, disrupt their lives, and then drop cases before having to face any consequences in court.” While this prosecutorial misconduct is unlikely to be punished, it is probably career ending for the lead prosecutors who probably hoped to become federal judges.

Instead of setting an example against protest, the government got a lesson in abuse of power. Prosecutorial abuse was not accepted by the juries that heard the cases, and the lesson for the police and prosecutors was — mass arrests and abusive prosecution will not be tolerated. Civil suits have been filed against the round-up arrests by police, those have not yet been resolved. KZ

The US Attorney’s Office (USAO) have announced they are moving to dismiss without prejudice all charges against the remaining 38 protesters arrested during Donald Trump’s Inauguration.

The charges stem from an anti-capitalist, anti-fascist protest march, during which DC police indiscriminately deployed “less than lethal” weapons against protesters before arresting 234 people en masse. These arrests were made not on the basis of probable causes based on individualized suspicion, but instead based on geographic proximity to where vandalism was alleged to have occured.

Although similar arrests in the past resulted in the city of DC paying out millions to the arrested for violating their constitutional rights, the USAO decided to pursue unprecedented mass felony charges against around 200 people, including not just protesters, but journalists and medics. In doing so, the USAO advanced a shocking legal theory that what was clearly a First Amendment protect assembly was in fact a criminal conspiracy. As a result, anyone who attended a protest where a handful of individuals were alleged to have engaged in property damage were criminally liable under the law of conspiracy. The sinister logic of this theory was on full display during the first trial of Trump Inauguration protesters when during opening arguments the prosecution freely conceded they had no evidence anyone on trial had engaged in property damage.

The prosecution’s attempts to criminalize dissent failed. A jury acquitted all of the defendants at the first trial, resulting in the prosecution dropping charges for an additional 130 defendants. Other defendants had their charges dismissed after it was uncovered that the prosecution withheld exculpatory evidence from the defense. A second trial resulted in a mixture of acquittals and mistrials.

The prosecution showed an unbridled contempt for free assembly and free press throughout the prosecutions. They pushed baseless charges that had a chilling effect on protest. They engaged in misconduct as they hid evidence. They based their case around questionable evidence from disreputable right wing groups who conducted their own infiltration of protest organizers.

None of this is acceptable. Anyone involved in these abuses, starting with Assistant US Attorney Jennifer Kerkhoff, needs to be held accountable. Absent real accountability, such as Kerkhoff resigning or being fired, prosecutors will free to engage in similar abuses in the future