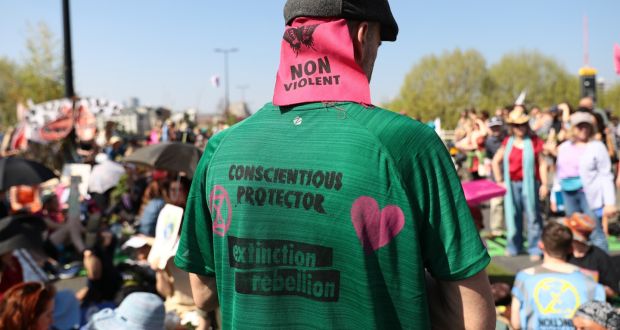 Last Weekend, I Was Part Of ‘The Largest Act Of Civil Disobedience In British History’

At 6am on Good Friday morning I went to sleep in the crypt of St John’s Church in Waterloo with the rest of the night shift of Extinction Rebellion as the sun began to rise.

Extinction Rebellion – or XR – is a non-violent socio-political movement founded in London in 2018 to protest and demand action against climate breakdown. It has had several days of action in London including an 11-day protest that ended on April 26th and saw the arrest of more than 1,100 protestors.

The sun rose heavy and red over St Paul’s Cathedral on Friday, over the new skyscrapers that adorn the City of London, making it look less like an intricate laundromat for the world’s dirty money and more like a theme park.

On Waterloo Bridge, the Extinction Rebellion day shift began stirring in their sleeping bags. We each paused to drink in the disrupted city. Behind us, the full moon was reaching its zenith, and bathed the Houses of Parliament, and the headquarters of the Metropolitan Police in its golden light. More of them anon.

Back to the crypt. The local Anglican parish of Waterloo has given Extinction Rebellion members sanctuary in its church, a Greek revival affair featuring imposing Doric columns – plus electricity and hot water. The crypt is the quietest part.

On Waterloo Bridge, a lively village has formed: a kitchen serving free food, tea and coffees; workshop areas; a yurt; two stages and a skateboard ramp, all dotted with shrubs and plants. On a haystack circle a Buddhist teacher offers a workshop on Extinction Rebellion’s demands: full governmental disclosure on the impacts of climate change; decarbonisation by 2025; and a citizen’s assembly.

The rebellion – the peaceful occupation of five sites in central London – has been ongoing since the previous Monday. Wary of the use of force, I take a look on Thursday and join the 40-strong Extinction Rebellion samba band at Piccadilly Circus.

The energy is positive, non-oppositional. The samba band are the craic troops of the rebellion, bringing numbers to bear on threatened sites like Parliament Square. The relentless drumming is hypnotic.

Early in the hours of Good Friday I make my way to the mellow energy of Waterloo Bridge. Signs hang from lampposts: “No drink, no drugs – keep the focus.” “Non-violent.” “Apologies for the disruption.”

Yes, road closures are inconvenient. So is climate change.

Disrupting emissions-as-usual feels like taking a friend’s car keys when they’re drunk. Brainwashed by marketing, we’re all addicted to fossil fuels and plastics in some form. Every return flight from London to New York costs the Arctic three square metres of ice. That’s some hangover.

In Ireland, ministers actively promote the biggest cause of Ireland’s rampant greenhouse emissions: the artificial insemination, sale and slaughter of non-human animals.

Future historians, if they exist, may look back upon how we treat livestock in the same way we now look back at slavery, or the Holocaust. How grimly ironic that human efficiency in clearing vast swathes of natural vegetation to subjugate other species in prison camps jeopardises our own survival.

Yet we can still act, which is why I spend Easter Sunday back on Waterloo Bridge for one of Extinction Rebellion’s actions. The tents, trucks and yurts are gone. Police now surround the site in their hundreds. The total number of arrests will pass 1,100: XR will describe it as the largest act of civil disobedience in British history.

Every two or three minutes a prone protester is spirited away. Amazing Grace is sung. Friends gather around: Stephen, who runs a charity; Hannah, a cook; Martin; Joni. More songs.

Chants spread like waves through the gathering. Police, we love you – we’re doing it for your children, too. Extinction Rebellion is built on loving your enemy, the sublime ideal at the heart of societal change, from the Buddha’s rejection of caste, to Jesus, right up to Martin Luther King.

And London’s police are no Roman soldiers. An officer comes over. I shake his hand and offer him chocolate. Wouldn’t I prefer walking away? I’ll give you another few minutes, he says.

It’s too important an issue, officer.

Next to us, a serene Joni is lifted away. I stick a slim PG Wodehouse volume into my belt, and the cuffs go on. Ten feet from the van they ask if I’ll walk. They’ve been feeding me too well here.

Inside the police van, they pack us in: four men, two women and seven officers. But we’re going nowhere. The police stations of southeast England are full to bursting.

After a two-hour wait for free cells, we arrive in Brixton. I’m processed with Roger, an engineer arrested at Greenham Common back in 1982, and Pete, a retired headmaster.

I’m last to get booked in, and start chatting with the officer who “nicked” me. He’s working long hours and rings his wife. They’ll take the dogs out tomorrow, go out for a meal on his day off.

He gets talking about Extinction Rebellion, about China. Yet Chinese emissions are tied to Western demand, and are in any case lower per head than in Britain or Ireland.

He says his aunt hand-raised an orphaned bullock who went on to befriend the family’s two dogs but ended up in the slaughterhouse all the same. He wonders what would happen to livestock if we all went veggie. They’d probably live longer. We shake hands at my cell.

At 4am I’m woken up and brought out for DNA and fingerprints. The light in my cell stays on all night, but they let me keep my book. It feels like a short solitary retreat.

On Easter Monday I’m released without charge, more than 24 hours after my arrest, and 30 minutes after speaking to my solicitor. An Extinction Rebellion supporter gives me a banana and lemonade outside.

Lifestyle change isn’t enough any more. We need a collective effort not seen since the second World War, one that sidesteps the anthropocentric traps of nationalist, political and religious differences.

This is just the start, the first sip of a bracing draught. A new movement is gaining traction, and ordinary people are sacrificing not blood, sweat or tears, but their liberty.

Everything has been tried but mass civil disobedience. Don’t just do something – sit there.