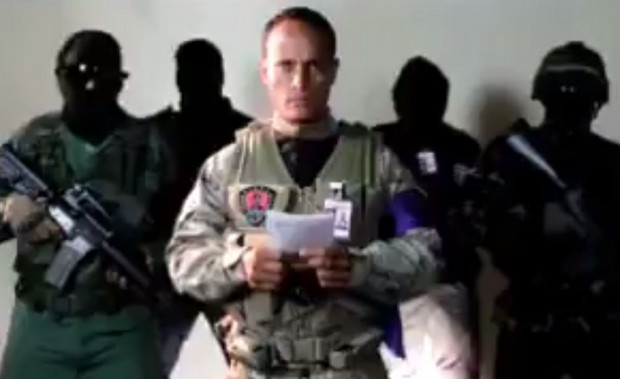 More than 80 people miraculously avoided injury or death in a helicopter attack that targeted Venezuelan government buildings this week. The attack may have been part of an attempted coup supported by the U.S. as it seeks to topple Venezuela’s government to gain access to its massive oil reserves.

Opposition efforts to topple Venezuelan President Nicolas Maduro’s government are rapidly heating up, as months upon months of opposition protests have failed to make the inroads desired by the more extremist elements of the opposition and their foreign backers, particularly the United States.

With the current government still hanging on to power despite years of economic sabotage and the funneling of millions from the U.S. to right-wing Venezuelan opposition parties, those determined to see Maduro removed from power have now turned to more drastic, violent measures in order to spark a coup.

On Tuesday, one of the more dramatic incidents of the most recent phase of the Venezuelan crisis took place when a stolen police helicopter opened fire on the Supreme Court and the Interior Ministry. At the time the attack occurred – about 5 p.m. local time – there were an estimated 80 people still inside the Interior Ministry and the Supreme Court was in session. No deaths or injuries were reported, a fact that the Venezuelan government attributed to a quick response by national guard forces, who repelled the attacking helicopter before it could do more damage.

Maduro condemned the attack soon after it occurred, calling it a “terrorist attack” that “could have caused dozens of deaths.” Ernesto Villegas, Venezuela’s Communications and Information Minister, stated that the attack was intended to be part of an attempted coup led by extremist groups within the opposition, with full U.S. government support said to be behind them.

Villegas’ assertion that the U.S. was involved in this attack is not based on mere speculation. Pérez has been known to work for Miguel Rodríguez Torres, a former general and former minister of Venezuela’s Department of Interior Relations, Justice and Peace who is currently being investigated for his ties to the U.S. Drug Enforcement Administration (DEA) and the CIA. The charges first surfaced when the Venezuelan news agencyÚltimas Noticias obtained an official DEA document that described Rodríguez Torres as a “key information provider” for the agency and recommended that he be secured as a protected source for the DEA and U.S. government. It also noted that 40 percent of his assets and wealth are held in the U.S. under his wife’s name.

The U.S. has long sought to oust the left-wing, democratically elected government that was brought to power in Venezuela by Hugo Chávez in the late 1990s. Since Chávez’s election, the U.S. is believed to have spentbetween $50 to $60 million to strengthen the country’s right-wing opposition in the hope that they would win elections. Former U.S. President Barack Obama alone dedicated $5 million to “support political competition-building efforts” in Venezuela.

More recently, the U.S. Senate has been mulling over new legislation that would provide an additional $20 million for “democracy promotion” efforts in Venezuela. However, some of these efforts in the past have led to right-wing politicians and their affiliates paying protesters in cash to violently escalate opposition rallies.

Such rallies have turned increasingly violent in recent weeks, with three people burned alive by opposition protesters just in the last week. Journalists have also been targeted, with some being directly shot at andothers threatened with being lynched or set aflame. Despite the violence, the Venezuelan opposition is likely to continue receiving funding from the U.S., which is eager to gain control of Venezuela’s oil reserves – the largest in the world – no matter the cost.