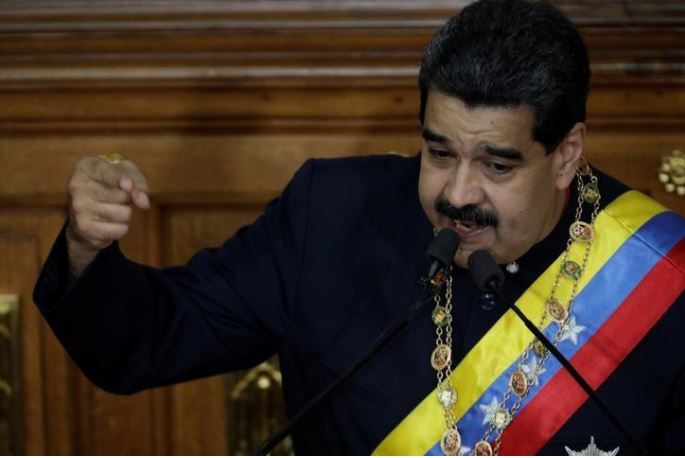 U.S. President Donald Trump’s surprise comments on Friday may bring the beleaguered Maduro some respite in the region, just as Venezuela was on verge of becoming a pariah over its recent installation of a legislative superbody, widely condemned as a power grab by the ruling Socialists.

Following Trump’s assertion that military intervention in Venezuela was an option, Maduro’s critics are caught between backing the idea of a foreign invasion of Venezuela or supporting a president they call a dictator.

Trump did not specify what type of options he had in mind.

“We want to express gratitude for all the expressions of solidarity and rejection of the use of force from governments around the world, including Latin America,” said Arreaza, in a short speech on Saturday.

“Some of these countries have recently taken positions absolutely contrary to our sovereignty and independence but still have rejected the declarations of the U.S. president.”

It was one of Maduro’s fiercest critics, Peru, that led the charge in criticizing Trump’s threat, saying it was against United Nations principles. Mexico and Colombia joined in with statements of their own.

Regional alliance Mercosur added that it rejected the use of force against Venezuela, despite having indefinitely suspended the country last week amid international condemnation of Maduro’s new, all-powerful “constituent Assembly”.

After four months of deadly protests against his government, Maduro says the assembly is Venezuela’s only hope of obtaining peace by locking in the socialist policies of his mentor and predecessor, the late Hugo Chavez. Critics say the assembly is a bald maneuver by Maduro to cling to power as his popularity slumps under the weight of the country’s economic crisis.

Venezuela’s Presidente Nicolas Maduro gestures as he speaks during a session of the National Constituent Assembly at Palacio Federal Legislativo in Caracas, Venezuela August 10, 2017.Ueslei Marcelino

Peru expelled Venezuela’s ambassador in Lima on Friday, but that did not stop it from criticizing Trump’s threat.

“All foreign or domestic threats to resort to force undermine the goal of reinstating democratic governance in Venezuela, as well as the principles enshrined in the U.N. charter,” said Peru’s Foreign Minister Ricardo Luna.

Peru under President Pedro Pablo Kuczynski had taken the toughest stance yet toward Venezuela’s socialist government, and has openly called Maduro a “dictator”.

The new legislative superbody, which made waves last weekend by firing a dissident chief prosecutor, took new action on Saturday on the country’s election timetable. It unanimously passed a resolution to move the country’s Dec. 10 governors’ election up to October.

Assembly members said the decision was made in part because the election had been delayed due to “opposition-led violence.” More than 120 people have died in unrest and anti-government protests since April.

The National Electoral Council (CNE) was asked by the assembly to set the exact date for the governors’ election.

Venezuela is undergoing a crisis in which millions are suffering from food and medicine shortages and high inflation.

The ruling Socialist Party has for years accused the United States of plotting an invasion as a way of controlling its oil reserves, the world’s largest, through a military intervention similar to the Iraq war.

Previous U.S. administrations had brushed this off as politicized rhetoric meant to distract from Venezuela’s domestic problems.

Under former President Barack Obama, the State Department in 2015 made quiet diplomatic overtures that led to several high-level meetings. The effort ultimately foundered as Maduro hardened his stance against opposition critics.

Venezuela’s Information Minister Vladimir Villegas on Saturday tweeted a picture of the Statue of Liberty holding a machine gun instead of a torch, and a link to an article describing, “A Chronology of U.S. ‘Military Options’ in Latam and the Caribbean.”