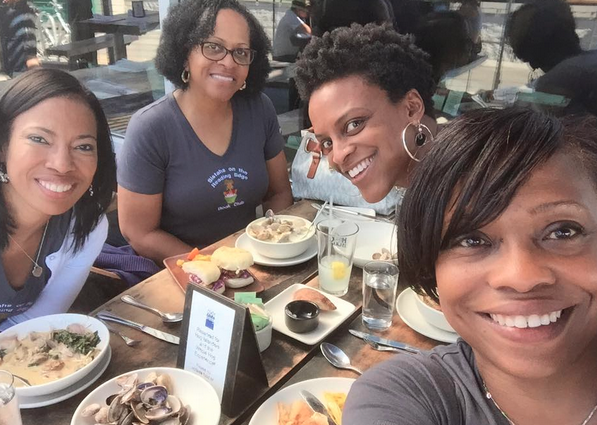 Every once in a while, you’ll see a story that’s so uniquely and unambiguously Black — with so many different aspects of Blackness involved in it — that it’s almost like someone had a Blackness Bingo card and was trying to fill every slot. The story of the11 Black women thrown off of a train — a train where the train’s only purpose is to transport tipsy people to somewhere where they can get more tipsy — for having too good of a time on that train qualifies. Seriously, if this story got any Blacker it would have to involve a Denmark Vesey hologram hurling empty Hennessy bottles at Donald Trump.

Let’s just go down the list of all the things involved with this that can be categorized as some Black-ass shit.

A group of Black women in a book club called Sistahs on the Reading Edge?Some Black-ass shit. Any time a group name could also easily be the title of a Terry McMillan novel or a Day Two panel at Blogalicious, you know its appropriately Black. And you know it took at least a half-dozen group emails to decide on that name, because someone wanted to name it “Black Chicks Read” and someone else wanted to call it “Sisters Gone Wild…With Books” and it took three to five emails to articulate why neither title would work.

A group of Black women in a book club called Sistahs on the Reading Edge doing a wine tour together? Some Black-ass shit. Raise your hand if when first hearing about this story you thought to yourself “A book club on a wine tour? That’s some cool-ass shit. I want to read books with friends while drunk on a train!” Now keep your hand up so I can give you a high five, because my hand is up too.

A group of Black people having such a good time that it’s making White people uncomfortable? Some Black-ass shit. Because I’d bet a bottle of Merlot that every Black person reading this has been in at least one situation where they were with their friends in a predominately White setting and were having such a good time that a group of White people got annoyed. It usually starts with loud sighing. And then subtle looks of disapproval. And then louder sighing. And then less subtle looks of disapproval. And then someone gets up and gets a manager, and does some awkward head movements and pointing like they’re trying to tell a dumb toddler where the Easter eggs are hidden. And then the manager who clearly is annoyed with the person asking him to speak to the fun-having Black people, reluctantly approaches. And you say “Ok, we’ll keep it down.”

And then he leaves. And then you get louder. Because fuck them.

A group of Black people doing absolutely nothing other than “enjoying life while Black” facing some sort of legal consequence? Some Black-ass shit. Because apparently nothing is more threatening than a group of happy-ass Black women on a wine train. Actually, I misspoke. Angry Black people are more threatening. But quiet ones are even more threatening than angry ones, because while they’re over there being quiet, they could be thinking up all types of creative ways to kill White people. So maybe, to be safe, if you happen to be Black, just don’t be Black. It’s probably the best thing for everyone involved.