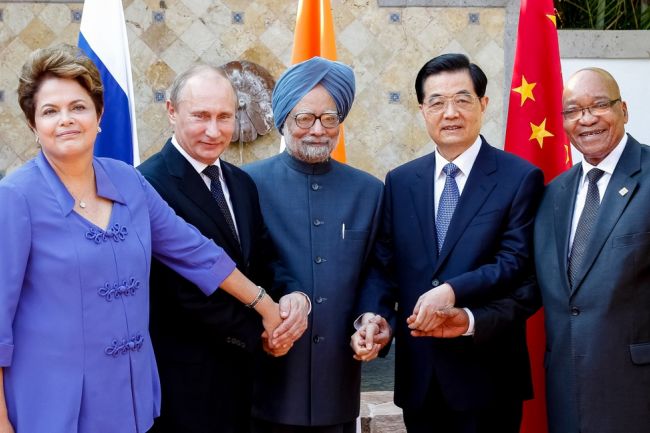 BRICS Development Bank, expected to be launched on 15 July 2014 in Fortaleza.

The BRICS Development Bank is expected to be officially launched on 15 July 2014, at the next BRICS summit in Brazil. The BRICS Development Bank is a proposed development bank run by the five BRICS states (Brazil, Russia, India, China and South Africa) as a potential alternative to the US controlled institutions of the Bretton Woods system–World Bank and International Monetary Fund. The establishment of this development bank was first agreed by the leaders of the BRICS countries at the 5th BRICS summit held in Durban, South Africa, in July 2009. The leaders of Brazil, Russia, India, China and South Africa are expected to sign a treaty to launch the bank in the forthcoming BRICS summit in the northern Brazilian city of Fortaleza. The bank will, then, have to be ratified by the countries’ legislatures and could begin lending as early as two years after this.

It is reported that the BRICS, by launching this new development bank, will be seeking to avoid some of the faults of the IMF, World Bank and regional development banks, i.e. too much rich country domination and too many conditions imposed upon the borrower country. It has also been mentioned that the BRICS Bank ought to be more transparent without being choked by heavy bureaucracy like the World Bank.

The stated aim of the BRICS Development Bank is to help to ensure economic stability for the Emerging Economies should the US dollar continue to fluctuate. The new bank will symbolize the growing influence of Emerging Powers, in particular the BRICS economies, in the global system long dominated by the US and its European allies through the institutional agencies of the Bretton Woods, IMF and World Bank. This new bank presents a new and clear step away from economic and financial dependence on the US-centered bloc by the BRICS economies.

It has been stated that the new bank aims to look into the finances of borrowers, but will have no intention to intervene in their economic and financial affairs. The basic idea is to provide emerging economies loans at a lower cost than what they currently would get in markets. The bank, whose headquarters is expected to be in Shanghai, will focus on infrastructure projects in Emerging Economies– borrowers will use the money for approved projects and cushion themselves from ups-and-downs in global markets.

The new bank will initially be quite small comparing to the size of the World Bank or the IMF, but it will be a strong reminder to the world of the need to reform global institutions to reflect the recent major shift in the global system towards the Emerging Powers.