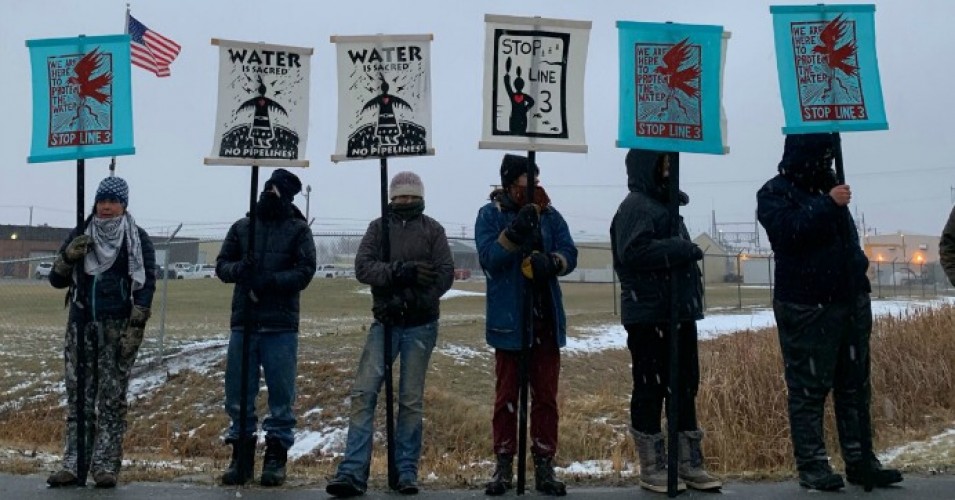 Above photo: Water protectors on Monday blocked the entrance to an Enbridge terminal in Minnesota to display ongoing opposition to the proposed Line 3 tar sands project. (Photo: ResistLine3 via Twitter)

Police were about to saw off the leg of a tripod from which a protester was hanging, activists said.

Police in Clearbrook, Minnesota were accused of putting the “profits of oil companies before human life” after activists said law enforcement on Monday began sawing the leg of a tripod from which a tar sands protester was suspended.

An estimated 30 protesters blockaded the entrance to Enbrige’s Clearbrook Terminal in a display of ongoing opposition to the oil company’s proposed Line 3 project, which would bring tar sands from Alberta to a Wisconsin shipping hub, passing through Minnesota.

Several activists held a large banner across the road to the entrance reading “Stop Line 3. Protect the Sacred.” They stood in front of 21-year-old Sara-Beth Anderson, who was suspended from the tripod.

The ResistLine3 Twitter account shared photos and details about the action on social media, including that police began to saw one of the tripod legs, prompting Anderson to come down on her own to avoid bodily harm.

BREAKING: Police are cutting down one of the legs of the tripod. This poses a great danger to Sarah who is locked into the tripod. This is also highly illegal! #StopLine3 @GovTimWalz @LtGovFlanagan https://t.co/d9xVm68ABA pic.twitter.com/blfvDdlhFr

After attempting to saw the tripod with her locked in, Sarah decided to come down on her own due to the threat to her life. Police in Clearbrook have shown that they put the profits of oil companies before human life. #StopLine3 pic.twitter.com/l7ugXx3fQY

After Anderson descended, she was taken into police custody.

In a press statement ahead of the action, Anderson said she was undertaking “this risk for the unborn, for the Indigenous peoples fighting to protect their territories all over the planet, for the oceans.”

The Line 3 project has been the target of sustained criticism and protests over its threats to human rights and the environment, including jeopardizing water resources.

StopLine3 noted an additional concern in a tweet on Monday. “With projects like Line 3 come man camps that increase violence against Indigenous women. 1 in 3 native women will be sexually assaulted in their lifetime. This ongoing colonialism must end. We must #StopLine3.”

The power of protest hasn’t gone without the notice of law enforcement.  According to records obtained earlier this year by The Intercept, Minnesota police looked to the example North Dakota law enforcement set in their harsh crackdown of Standing Rock protesters to gear up for their own potential crackdown of Line 3 protesters.

“The destruction of the sacred is happening because of these terrible decisions to keep extracting, to keep harming the Earth despite what climate science has told the world’s leaders,” Anderson said in her statement.

“Anyone can take a stand against the greatest threat facing our shared world,” she added, “get involved, get involved now.”