Wednesday’s hearings by the House and Senate Intelligence committees on “extremist” political views served as the occasion for members of Congress to urge technology companies to flagrantly violate the US Constitution by censoring political speech, carrying out mass surveillance, and muzzling journalists in pursuit of the government’s geopolitical aims.

The hearings revolved around allegations, promoted ceaselessly in recent months by the intelligence agencies, leading figures within the Democratic Party, and newspapers such as the New York Times, that social opposition to the political establishment results from “fake news” promoted by Russia.

As Democratic Congressman Adam Schiff put it, “Russia” promoted “discord in the US by inflaming passions on a range of divisive issues” and sought to “mobilize real Americans to sign online petitions and join rallies and protests.”

The basic problem, however, as Schiff put it, is “not just foreign.” The algorithms used by Facebook and Twitter have the “consequence of widening divisions among our society.” Schiff complained: “What ends up percolating to the top of our feeds tends to be things we were looking for,” as opposed to US government propaganda disseminated by the establishment media, which he referred to as “true information.”

In line with Schiff’s assessment, members of Congress who participated in the hearings spent the bulk of their time demanding that the companies censor such “fake” news, which they equated with the writings of exiled journalist Julian Assange and other political dissidents.

It is a testament to the decay of American democracy that it was left to the representatives of Facebook and Twitter, who have been broadly accused of violating users’ privacy for their own financial gain, to inform members of Congress about the ABC of constitutional law.

In an exchange that embodied the total contempt for freedom of speech that pervades the ruling elite, South Carolina Representative Trey Gowdy demanded that Facebook and Twitter block their users from making inaccurate statements about the current day of the week.

“Can I ‘say today is Thursday’,” the South Carolinian demanded. “What are you going to do with that?” Gowdy asked which constitutional amendment protects the right of people to make such statements, totally oblivious that almost all false statements are protected under the First Amendment.

Colin Stretch, Facebook’s general counsel, fighting back a skeptical smile, replied: “There is Supreme Court precedent on that…” 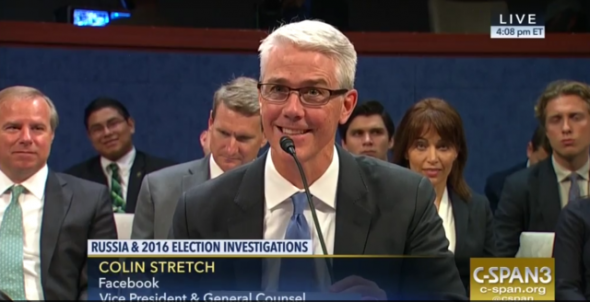 Gowdy, befuddled, demanded: “On which side?” Stretch answered: “That it is, in most cases, protected.” He continued: “On Facebook, our job is not to decide whether content is true or false.”

Although the representatives of the technology companies largely played along with the narrative of “Russian meddling” in American politics, their resistance to the most flagrant censorship demanded by the government piqued the ire of the senators leading the witch-hunt.

“I don’t think you get it,” fumed Senator Dianne Feinstein, who said the past year had seen “a cataclysmic change” in American politics. This is “the beginning of cyber warfare,” she declared, and technology companies “have to really take a look at that and what role you play.”

Senator Mark Warner, for his part, complained that his accusations had been “frankly blown off by the leaderships of your companies and dismissed.”

Earlier this month, Google removed Russia Today (RT), a Russian-sponsored TV station and online news outlet that reports stories largely censored by the mainstream press, from its list of “preferred” channels on YouTube. Feinstein took issue with Google’s statement that it revoked RT’s status as a preferred channel for non-political reasons, and demanded to know why Google had not acted against RT earlier.

Google’s general counsel Kent Walker replied: “We have carefully reviewed the content of RT to see that it complies with the policies that we have against hate speech, violence, etc. So far, we have not found violations.”

California Democratic representative Jackie Speier asserted that RT “seeks to influence politics and fuel discontent in the United States.” She asked: “Why have you not shut down RT on YouTube? … It’s a propaganda machine, Mr. Walker, the intelligence community says it’s an arm of one of our adversaries.”

The clashes continued. Senator Tom Cotton demanded to know why Twitter refused to turn its platform over to the CIA in order to conduct mass surveillance. He asked: “Do you see an equivalency between the Central Intelligence Agency and the Russian intelligence services?” Sean Edgett, Twitter’s general counsel, replied: “We’re not offering our service for surveillance to any government.”

Cotton likewise demanded that Twitter censor WikiLeaks’ editor Assange. “The current director of the CIA, Mike Pompeo, as well as this committee, has labeled WikiLeaks a non-state hostile intelligence service who aids hostile foreign powers like the Kremlin,” he said. “Yet, to my knowledge, Twitter still allows him to operate uninhibited.”

Receiving a reply from Twitter general counsel Edgett that the company applies its policies “without bias,” Cotton retorted: “Is it biased to side with America over our adversaries?”

In yet another incitement for technology companies to violate the Constitution, this time the Fourth Amendment, which prohibits unreasonable searches and seizures, Texas Democratic Congressman Joaquin Castro asked: “Are you also intending to turn over to the committee any kind of direct messages” on accounts suspected of being linked to Russia?

When Edgett pushed back that this would be possible only through legal channels, Castro responded: “Certainly you’re not making the argument that a Russian account, a fakely created account, has some protection of privacy here.” Edgett replied: “Some users may end up being fake. Others will be real.”

The most surprising element of the hearings, however, was the extent to which Walker, Google’s general counsel, sought to separate Google’s search tools from the social networks operated by Facebook and Twitter when it comes to “fake news.”

In reference to a question regarding fake news, Walker interjected: “I think there’s a distinction between say Google search, whose goal is to provide accurate, relevant, comprehensive information and social network concerns,” such as those related to Twitter and Facebook. “We think the heart and soul of the products is to try to provide useful and, to the extent we can, accurate information to users.”

This was in addition to his prepared testimony, where he noted: “At Google News, we use fact check labels to spot fake news. At Google search, we have updated our quality guidelines and evaluations to help surface more authoritative content from the web.”

Based on the stated goal of fighting “fake news,” Google has implemented sweeping changes to its search algorithm that has led search traffic to 13 leading left-wing, progressive and anti-war sites to plunge 55 percent. Search traffic from Google to the World Socialist Web Site has fallen by 74 percent, and the site has been blocked from Google News.

Wednesday’s testimony makes clear the political motives behind Google’s actions. Rather than seeking, as it publicly claims, to provide “true” and “authentic” content, Google is acting as the proxy of the US government and its agencies to muzzle its critics and political opponents.