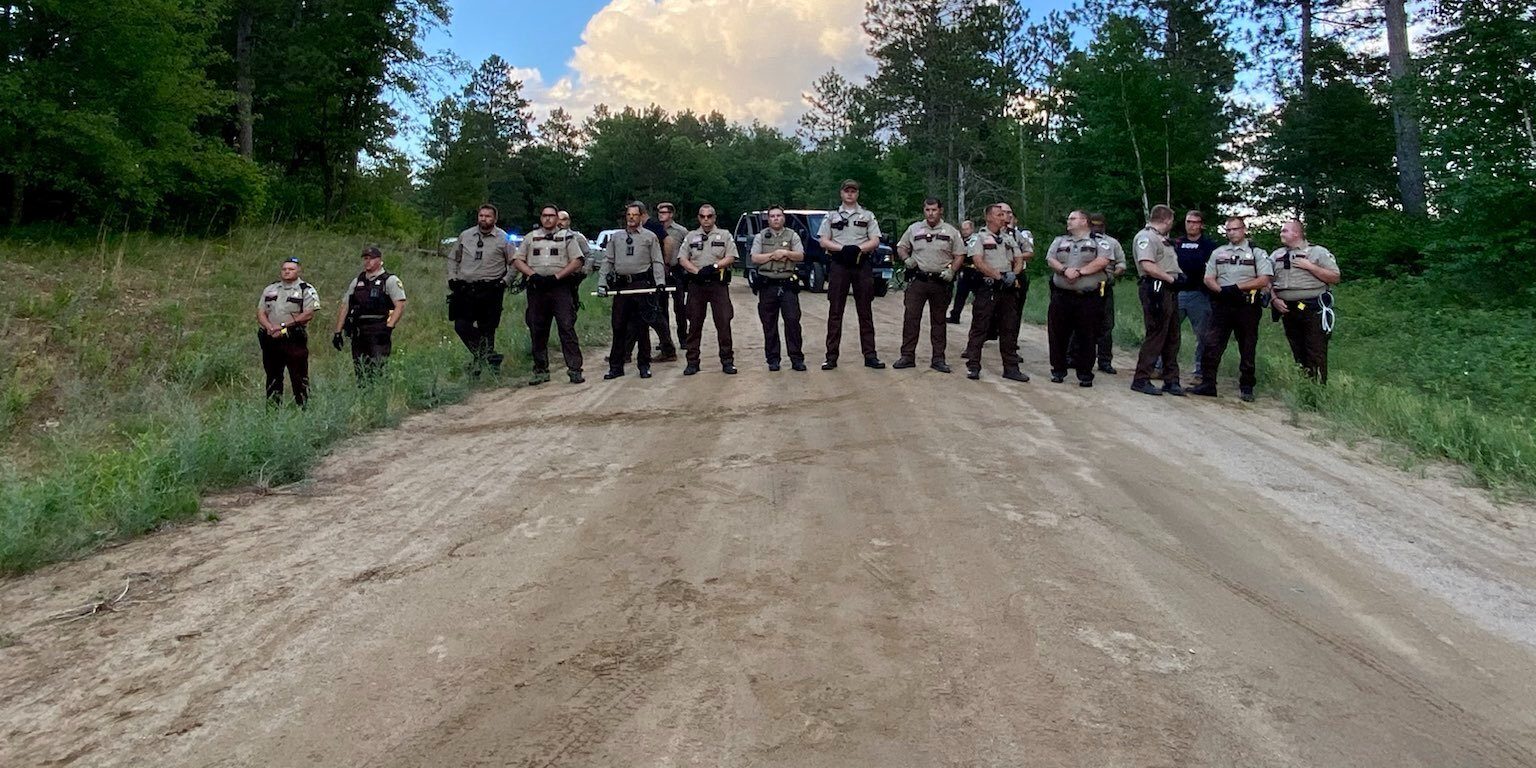 Indigenous environmental protectors opposing the expansion of Enbridge’s Line 3 pipeline, Tara Houska and Winona LaDuke, represented by the Center for Protest Law and Litigation, a project of the Partnership for Civil Justice Fund, and EarthRights International, today filed for a restraining order against Hubbard County, Sheriff Cory Aukes and the local land commissioner in northern Minnesota.

The Hubbard County Sheriff has unlawfully blockaded access to a camp serving as a convergence space and home for Indigenous-led organizing, decolonization and treaty rights trainings, and religious activities by water protectors seeking to defend the untouched wetlands and the treaty territory of Anishinaabe people. The Sheriff’s department, with no notice, arrived with squad cars, riot lines of police and blockaded the only means of entry and exit to the camp, a driveway that has been in existence for more than 50 years.

They have issued numerous citations and violently arrested persons seeking to travel on the driveway to bring food and water to the camp. This blockade is an escalation of a months-long unlawful campaign of harassment, arrests, disruption, surveillance and baseless pullovers of Indigenous water protectors and land defenders and their allies who oppose the Line 3 pipeline expansion.

The Sheriffs’ departments in the region are being paid by funds from the Enbridge pipeline corporation for their time spent acting against the pipeline’s opponents through a “Public Safety Escrow Fund.” Enbridge has paid more than $1 million to “reimburse” local sheriffs’ departments, effectively privatizing Minnesota’s public police forces in service to efforts to repress opposition to the pipeline.

“The Hubbard County Sheriff has attempted to illegally construct a de-facto open air prison to trap Indigenous environmental protectors and allies on their own property.”— Mara Verheyden-Hilliard, Executive Director of the CPLL

“The Hubbard County Sheriff has attempted to illegally construct a de-facto open air prison to trap Indigenous environmental protectors and allies on their own property and to prevent others from joining in decolonization and treaty rights trainings and organizing against Enbridge’s Line 3 pipeline,” stated Mara Verheyden-Hilliard, legal counsel and director of the Center for Protest Law and Litigation at the PCJF. “This is an overtly political military-style blockade and checkpoint system being deployed with funding from the Enbridge corporation using the power of the state against its environmental opponents.”

Tara Houska stated: “Hubbard County showing up at a private Indigenous home with a riot line was obscene. They arrested 12 people, violently in some cases. Being thrown into the dirt of our driveway and cuffed is a gross abuse of power that sets a dangerous precedent for all private landowners. At one point, there were almost 50 squad cars on the dirt road in front of our home, sheriffs in the woods, sheriffs pushing forward in our driveway — I prepared myself to go into our sweat lodge, next to our gardens, and be dragged out that way. Nobody should ever have to do that. Shame on Hubbard County, shame on Minnesota, and shame on public servants who have clearly forgotten who their duty is owed to — Enbridge is a foreign corporation sucking Minnesota’s rivers dry, violating Anishinaabe treaty rights, and colluding financially with Minnesota’s police forces. What part of any of that is in the public interest?”

“Hubbard County showing up at a private Indigenous home with a riot line was obscene…Shame on Hubbard County, shame on Minnesota, and shame on public servants who have clearly forgotten who their duty is owed to”— Tara Houska, founder of the Giniw Collective

“Indigenous communities, who have fought in the courts, through public protests and civil disobedience, to halt construction of Line 3 have explicitly stated that they do not want this pipeline anywhere near their protected lands,” said Marco Simons, General Counsel at EarthRights. “We must put a stop to this blatant display of environmental racism and listen to these communities. Moreover, we must also examine the unlawful and discriminatory policing tactics against these protestors, who have the constitutional right to protest the expansion of Line 3.”

The emergency legal action filed today seeks the immediate removal of the blockade set up on June 28, 2021, by Hubbard County sheriffs across the driveway to the Namewag Camp. Under the pretext that the small portion of the driveway extending from the Camp’s private property onto Hubbard County property is now suddenly a “trail” and not designated for vehicular traffic – despite its 50 year use as a driveway – local sheriffs have either physically blocked access, at times by forming a line of over twenty officers, several armed with clubs, or issued citations to water protectors who have driven vehicles on the driveway, even when delivering food, water, or other necessary supplies. The legal action argues that the blockade is a violation of private property rights, including in particular an easement covering the driveway to the property.

The proposed new Line 3 pipeline would extend approximately 338 miles through northern Minnesota, carrying a projected 760,000 barrels of tar sands oil each day across 227 lakes and rivers. (including the Mississippi River), over 800 protected wetlands and ceded lands where the Red Lake Band of Chippewa Indians and White Earth Band of Ojibwe exercise hunting, fishing, and gathering rights pursuant to treaties recognized by federal law. The pipeline would destroy culturally important wild rice beds, risk catastrophic spills, and significantly contribute to climate change, representing the equivalent of 50 coal plants worth of greenhouse gas emissions to the atmosphere.

Enbridge, which is already responsible for the largest inland oil spill in the United States, also holds a 27.6 percent equity stake in the controversial Dakota Access Pipeline. Tar sands are a particularly destructive form of fossil fuels.

Their extraction and production is significantly more expensive and energy-intensive than that of oil. On a lifetime basis, a gallon of gasoline made from tar sands produces about 15 percent more carbon dioxide emissions than one made from conventional oil, according to The Union of Concerned Scientists.

Tara Houska is an environmental and Indigenous rights attorney and advocate, land defender, founder of the Giniw Collective and a leader of the efforts to stop Line 3. She is a citizen of Couchiching First Nation.

Winona LaDuke is a renowned activist working on issues of sustainable development, renewable energy, and food systems. She is the co-founder and executive director of Honor the Earth. She lives and works on the White Earth reservation in northern Minnesota, and is a member of the Mississippi Band Anishinaabeg.