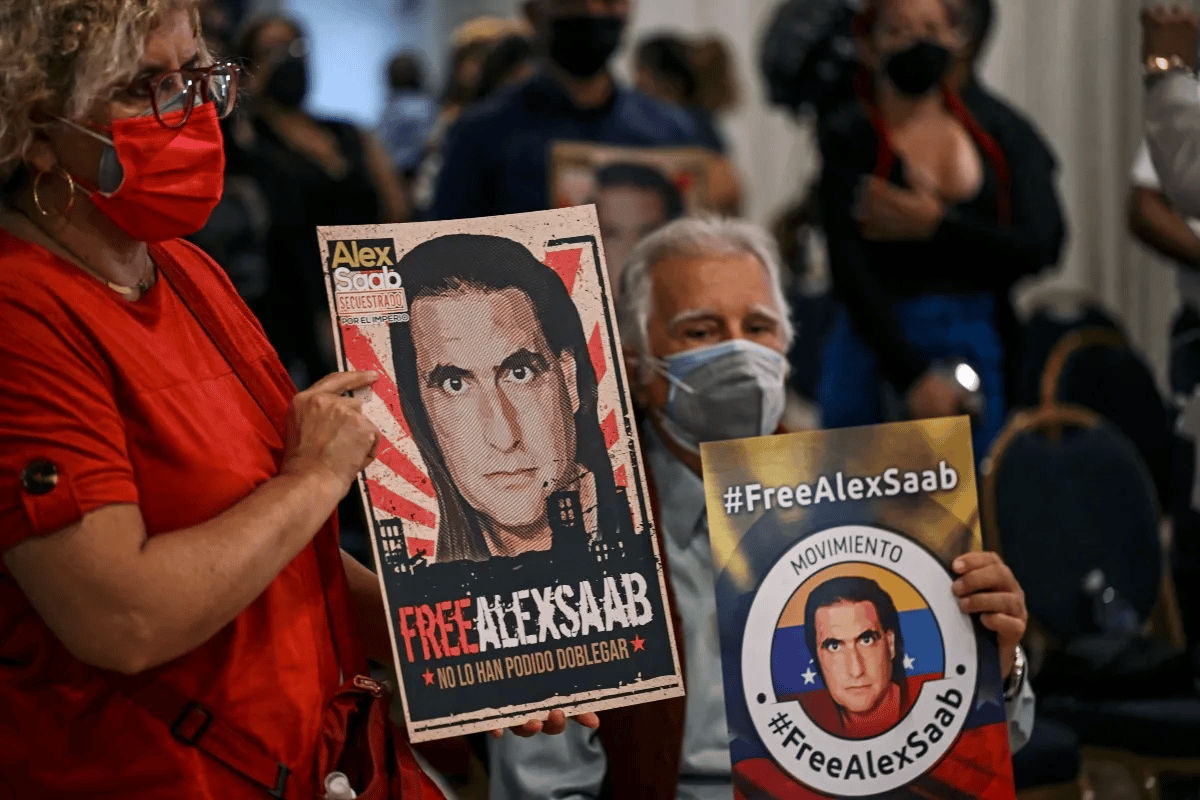 US Always Knew Alex Saab Was A Diplomat

Above Photo: A protest in Caracas demanding freedom for Venezuelan diplomat Alex Saab, who is incarcerated in the US. Yuri Cortez / AFP.

At the time of writing this interview, Alex Saab has already been incarcerated for 885 days in a prison in Florida, United States, according to leaderboards laid out on the social media of the people campaigning for his release. Saab is being held there until the US District Court for the Southern District of Florida determines whether or not the United States accepts his diplomatic status; their acceptance would obligate them to release Saab, says his legal defense team.

Indhriana Parada, a lawyer who is part of Alex Saab’s legal team, spoke to Últimas Noticias about his case, where she discussed a declassified document that records Mike Pompeo, US Secretary of State for Donald Trump, admitting to Alex Saab’s diplomatic status.

Lawyer and human rights activist Parada has written a book, The Kidnapping of Alex Saab, that essentially serves as Saab’s annotated case files. The book was presented at the International Book Fair of Venezuela (FILVEN 2022) on Friday, November 18. President Nicolás Maduro also had had the book displayed on November 13, during the inauguration of the literary event at the National Art Gallery. In his speech, he described Alex Saab as a “prisoner of the war of US imperialism.”

What is the current status of Alex Saab’s trial in the US?

We must explain that the process is being carried out in the Court of the Southern District of Florida. There are two parallel procedures going on, one of which is a criminal case. To initiate that process, Saab was presented in that court on October 18, 2021, two days after he was extradited from Cape Verde to the United States.

What happened at that hearing?

At that hearing, Alex Saab pleaded not guilty. The next day, seven of the eight criminal charges against him were dropped, leaving only the crime of conspiring to commit money laundering, which, according to the court, qualified as a set of activities that predicated committing a crime.

How is this procedure going?

It is currently stalled in that Court of the Southern District of Florida. The Court is now discussing whether Saab has immunity from criminal prosecution, because whatever is decided regarding Alex Saab’s diplomatic immunity will affect the criminal trial.

How is Saab’s defense proceeding?

The defense filed a motion arguing that there could be strong evidence showing that the US government had full knowledge of Alex Saab’s diplomatic status and that he was a special envoy of Maduro.

How can they prove that?

The US Attorney’s Office asked the security agencies to produce classified and declassified documents, and, although they were somewhat compromised—on one page, all the content was crossed out—the conversations between the then Secretary of State Mike Pompeo and the US special representatives for Iran could still be ascertained. In those conversations, they expressed their concern about what they were going to say, what they were going to argue, because it was very likely that Alex Saab would be granted diplomatic immunity.

What, exactly, does this prove?

This proves that, prior to Saab’s arbitrary detention as well as throughout the legal process, high-level US officials such as the US Secretary of State already had full knowledge of Alex Saab’s identity and status, which they admit to in those conversations, as was disclosed in Mark Esper’s book, A Sacred Oath: Memoirs of a Secretary of Defense during Extraordinary Times. He says in that book that they knew Saab was an envoy of Maduro whose mission was to acquire food, medicine, and fuel for Venezuela.

And what action was the US going to take regarding Saab’s immunity, according to Pompeo’s conversations?

How could they do that?

Their argument is irrelevant and very weak, because there is jurisprudence of the International Court of Justice, according to which the non-recognition of a State by another State and the non-recognition of a government by a State does not preclude the international rights and obligations of other countries. The US was not attacking the diplomatic status of Saab, but the legality of Maduro to appoint him.

Why did it become known only some time later that Saab was a diplomat?

The appointment of a special envoy is an exclusive power of President Maduro, who directs Venezuela’s diplomatic relations. The president exercised that power based on an economic emergency decree of 2016. Through that process, he appointed Alex Saab as special envoy to fight this economic war, which is why Saab travels to conduct international trade on behalf of Venezuela. The National Security Law says that the State has the right not to publicize activities related to the security of the country.

Maduro described Alex Saab as a prisoner of war.

He is correct in doing so, because Venezuela is being subjected to an unconventional war. The situation has escalated to the point where the United Nations Human Rights Council itself has opened a special committee to analyze the impact of coercive measures in 35 countries around the world, including Venezuela. We must accept that armed conflict is not the only theater for war. We are in a war scenario, a very broad economic, political, diplomatic war, and the victims of these new forms of war are unprotected by the Geneva Conventions.

Has Alex Saab been contacted by the US authorities to reach a compromise?

From the moment he was arbitrarily detained in Cape Verde, and even before he was presented before the court, the US has been trying to make some sort of deal with him. First, they would require him to plead guilty and issue a statement against the Venezuelan government, and specifically against President Nicolás Maduro. Another request was that he stop working with the Venezuelan government.

The Venezuelan government suspended the dialogue with a sector of the opposition because of Saab’s arrest. Now the dialogues are going to restart.

The diplomacy of peace has brought great victories to Venezuela. Saab’s situation definitely has a political solution. There is no validity to the legal arguments against him. International law and Venezuela’s sovereignty are being violated. The United States knows it, and so do the judges there.