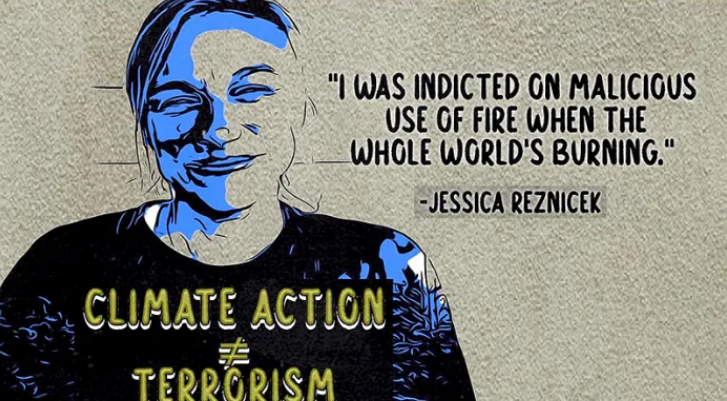 St. Paul, MN – In a defining moment for the climate justice movement and for all civil rights, the court will decide whether or not to uphold a “domestic terrorist enhancement” that an Iowa court applied to Reznicek’s prison sentence. Reznicek argues that the terrorism enhancement was both illegally and unjustly applied.

The appeal is supported by the Center for Constitutional Rights (CCR),  National Lawyers Guild, Water Protectors Legal Collective, and the Climate Defense Project. “If Jessica Reznicek’s acts can be punished as terrorism,” says an amicus brief filed by CCR, “the United States will have moved so far past the international consensus as to be operating in a completely different realm.”

Nearly 100 supporters of Jessica Reznicek dialed into the 8th Circuit Court of Appeals today to listen in as her attorney argued in front of a panel of three appellate judges, Hon. Jonathan A. Kobes, Hon. David R. Stras, Hon. Ralph R. Erickson, that the terrorism ehancement imposed at her sentencing by request of the Department of Justice by District Judge Rebecca Goodgame Ebinger was misapplied.  The 8th Circuit Court of Appeal will release their decision in the coming weeks.

Reznicek’s attorney Robert Richman argued that the terrorism enhancement does not apply in Jess’ case since her actions were not “calculated to influence or affect the conduct of the government or retaliate against government conduct.” The government prosecutor argued that even though Jessica’s actions targeted private property, that the terrorism enhancement must apply since she referred to the government’s regulatory failure of approving this pipeline in her public statement. In July 2020, a federal judge found this permitting process that Jessica was referring to to be illegal. Reznicek’s attorney said “the court should find that the error resulted in a five-fold increase in the [sentencing] guideline range.”

Robert Richman argued that under the prosecutor’s position, every time there is a political protest that tries to generate public attention to affect policy (the way our democracy works, he notes), this may trigger the terrorism enhancement. In the appeal brief Richman states that Jessica’s actions had, “at most an indirect and incidental effect on the government.”

The amicus brief filed by the Center for Constitutional Rights details the misapplication of the “terrorism enhancement” to Jess’ case. The brief notes “..the natural risk of a broad definition of terrorism is misapplication of the terrorism enhancement to traditional means of civil resistance: for example, a sit-in style protest near train tracks, a demonstration at a military exercise, or opposition to government immigration policies at airports around the country might next be subject to the label of terrorism.” The brief’s authors write “if Jessica Reznicek’s acts can be punished as terrorism, the United States will have moved so far past the international consensus as to be operating in a completely different realm.”

Following the hearing, the Campaign to Free Jessica Reznicek said, “we are extremely hopeful that the judges recognized that her actions were not terrorism.  We are hopeful that Jessica’s 8 year sentence will be overturned and her case will be sent back for resentencing.  No matter what they decide, we are prepared for all outcomes and will be with Jessica until the very end.”

In 2017 Jessica Reznicek and a partner from the Catholic Worker Movement publicly claimed responsibility for acts of vandalism against the Dakota Access Pipeline. In February, 2021 she pled guilty to a single count of Conspiracy to Damage an Energy Facility. In June, 2021 an Iowa judge imposed a “terrorism enhancement” at the prosecution’s request and sentenced Reznicek to 8 years in prison with restitution of over $3 million to be paid to Energy Transfer LLC. No one was injured by Reznicek’s acts of civil disobedience.

Excessive punishment for water protectors is on the rise where more states are passing harsh laws that target protestors, which have been architected and funded by the fossil fuel industry. Jessica wrote in a 2021 statement to the court, “I am not a political person. I am certainly not a terrorist. I am simply a person who cares deeply about an extremely basic human right that is under threat: water.”

Listen to the May 13th oral arguments here.

Amicus briefs filed in support of her appeal can be found here.

Over 15,000 people and 100 orgs have signed a petition in support of her objection to the terrorism enhancement and can be viewed here.