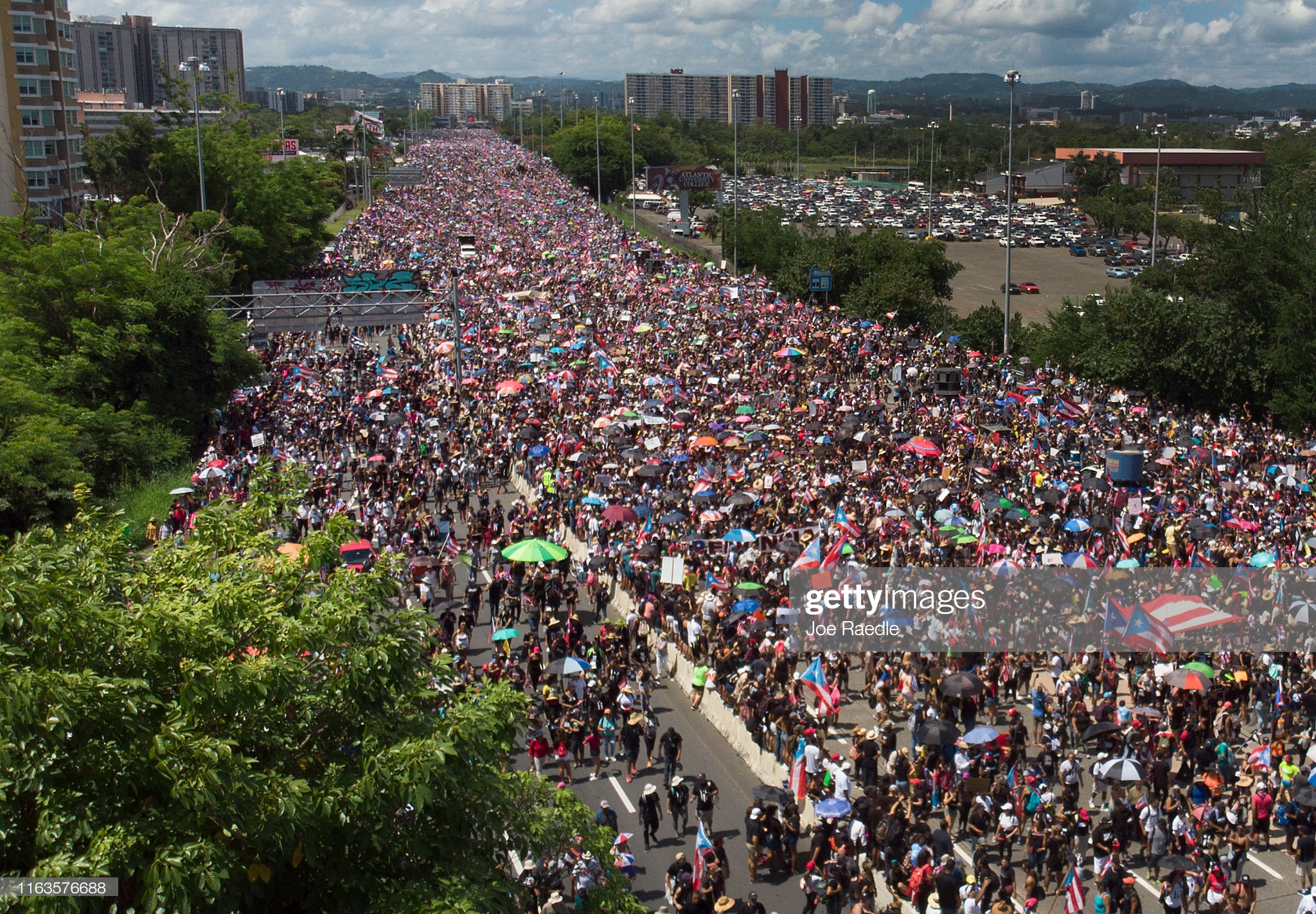 Above Photo: SAN JUAN, PUERTO RICO – JULY 22: An aerial view from a drone shows thousands of people as they fill the Expreso Las Américas highway calling for the ouster of Gov. Ricardo A. Rosselló on July 22, 2019 in San Juan, Puerto Rico. The protesters are calling on Gov. Rosselló to step down after a group chat was exposed that included misogynistic and homophobic comments. (Photo by Joe Raedle/Getty Images)

Despite the success of Monday’s mass protests, Puerto Rican activists say Ricardo Rosselló’s resignation will not be enough to reconcile longstanding injustices.

By all accounts, the shutdown of Puerto Rico’s industries, schools, government and business-as-usual on Monday was an unexpected show of popular sentiment against ruling Gov. Ricardo Rosselló. It was a true national strike, spreading from the capital in San Juan to all other major cities like Mayaguez, Ponce and Aguadilla.

While Rosselló was resistant to the initial calls and protests demanding his immediate resignation last week — following leaks that revealed misogynist and homophobic remarks he had made in private — the embattled leader finally succumbed on Wednesday night, announcing that he would step down next Friday.

Despite this success for half a million people who made Monday’s national strike possible, longtime Puerto Rican activists have been quick to assert that Rosselló’s resignation — and the fissures revealed by his blunders — will not easily be reconciled by minor reforms or proclamations.

“In our history, I don’t think there has been a moment like this one,” noted 76-year-old Oscar Lopez Rivera, widely regarded as the elder statesman of the island. “Even before the governor announced his resignation, the fact is that he was not governing Puerto Rico.”

Lopez Rivera, who was called the “Mandela of the Americas” throughout Latin America during his more than 35 years behind bars for supporting independence, has been living and working in San Juan since winning clemency in 2017.

“Many members of Rosselló’s own party, the pro-statehood New Progressive Party were not responding to him,” Lopez Rivera said. “The demands Puerto Ricans are making right now go beyond the call for his resignation: Puerto Ricans want the house of corruption, known as the legislature, to be cleaned out. They want the elimination of the Fiscal Control Board [created by the Obama administration to oversee the island’s economic affairs] and for the odious debt to be audited. Puerto Ricans want all public schools to remain public and those that were closed to be re-opened.”

Women’s rights organizer Onelia Perez Rivera agreed that Rosselló’s resignation would not stop the momentum behind these struggles, noting “This protest movement isn’t headed by traditional leaders or by conventional left sectors. Young people are here, but also entire families have responded to the call with great creativity!”

Perez Rivera, a leading force behind the long-standing empowerment association Centro Mujer Barranquitas, said that while she and other well-known progressive voices were consulted — due to their longstanding and respected critiques of the colonial and capitalist system that rules the island — it was the youth who made the protests happen. They were the originators, and their outrage was centered on a clear understanding that the people will not stand for the corruption and indignities of the past.

“Even though we still may not know how to build the new society we want to freely live in, we are feeling it! And it feels good,” she said. 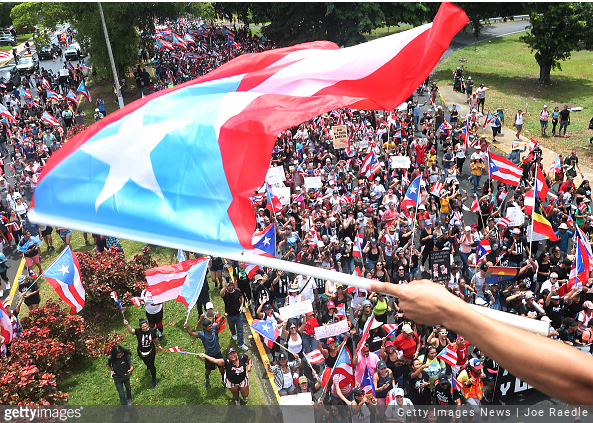 Campaign for Human Rights activist Luis Rosa echoed Perez Rivera’s sentiments, saying, “Rosselló’s resignation must be seen as a victory for the will of the people, a newly found or rediscovered victory of a new generation.”

The former political prisoner — who was freed in 1999 after a massive international campaign — then offered some perspective: “Those seeking to replace Rosselló will promise a world of change, creating compacts with community base organizations and proposing everything right up to the border of revolutionary change. But the people are clear that the core of what we need are three basic things: decolonization, an end to our colonial status through a constitutional assembly; health care, free for all Puerto Rican citizens; and free public education up through the university level.”

Rosa is calling for the creation of a far-reaching think tank that could script out a strategy for the work of achieving liberation. “Let us create projects that can take independence out of the realm of the abstract and intangible or unexplainable,” he said. “We are building something we can use to break the fear of change.”

With a national general strike being arguably the greatest weapon an occupied and oppressed people can use to overthrow repressive regimes, Monday’s dramatic strike was not the only contemporary Puerto Rican demonstration numbering in the hundreds of thousands. Huge mobilizations have also taken place in response to the privatization and selling of Puerto Rico’s nationalized electric industry, U.S. military bombings of neighboring Vieques and the incarceration of Puerto Rican political prisoners.

While the hyper-colonial nature of Puerto Rico’s specific relationship to the United States may lead the course of “regime change” down a convoluted path, there are few Americans who understand the intricacies of Puerto Rico’s current “free associated state” status. Even most progressive people are barely aware that the U.S. occupation of Puerto Rico began with direct marine intervention in 1898, and that the U.S. military still occupies choice lands throughout the archipelago.

What’s more, Puerto Ricans have been drafted to serve in the U.S. Armed Forces and sent disproportionately to the front lines of U.S. wars — despite the fact that they cannot vote in U.S. presidential elections, have no representation in Congress, and face harsh and extreme repression when they exercise rights that may contradict the wishes of Washington, D.C. As recently as June 24, the United Nations Special Committee on Decolonization noted that “political insubordination” on the part of the colonial United States “impedes Puerto Rico’s ability to tackle its serious economic and social problems.”

It is therefore not difficult to sympathize with Oscar Lopez Rivera in his assertion that those who took part in the strike — led in large part by young women — understood that “they were the majority” and that, by shouting for an end to the ways things have been, “they were decolonizing themselves.”

According to Lopez Rivera, Puerto Ricans are calling for “a total transformation towards a free and independent nation. And what we are witnessing is a movement that can’t be stopped.” Ultimately, he concluded, “Puerto Rico will be the nation it has the potential of becoming.”