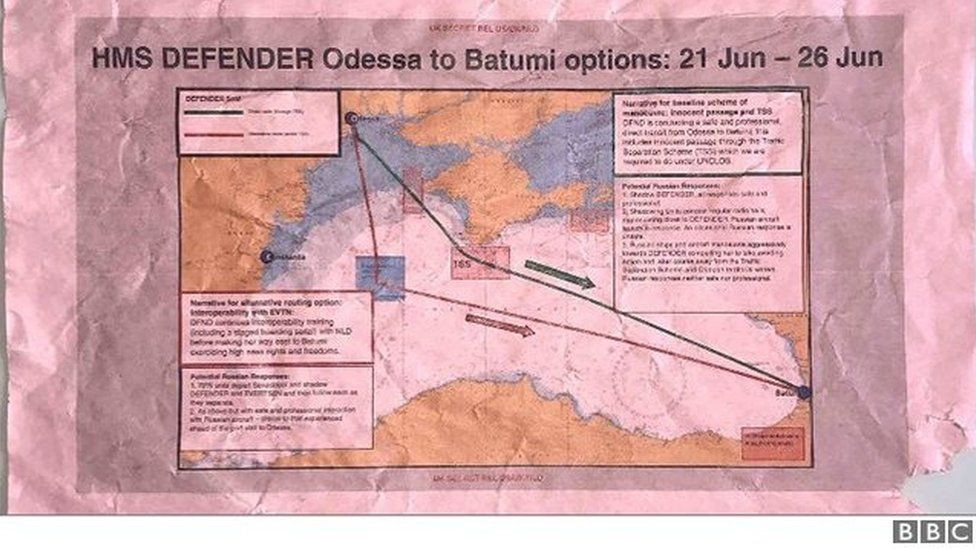 ‘Leaked’ Documents: Stunt Near Crimea Was An Intentional Provocation

Last week someone ‘leaked’ a number of confidential papers from the British Ministry of Defence to the BBC:

Classified Ministry of Defence documents containing details about HMS Defender and the British military have been found at a bus stop in Kent. One set of documents discusses the likely Russian reaction to the ship’s passage through Ukrainian waters off the Crimea coast on Wednesday. Another details plans for a possible UK military presence in Afghanistan after the US-led Nato operation there ends….The documents, almost 50 pages in all, were found in a soggy heap behind a bus stop in Kent early on Tuesday morning.A member of the public, who wishes to remain anonymous, contacted the BBC when he realised the sensitive nature of the contents.The BBC believes the documents, which include emails and PowerPoint presentations, originated in the office of a senior official at the Ministry of Defence (MoD).

Last week saw a provocative move against Russia by a British warship in the Black Sea.

The documents include this map which shows two potential routes that the HMS Defender could have taken to sail from Odessa in the Ukraine to Batumi in Georgia.

The British government ordered the ship to take the aggressive route through territorial waters of Crimea which the Russian government had announced to be off limits. Those three designated off-limits zones are marked on the British map!

Taking that route was patently illegal under international law. The map thus proves that the move of the HMS Defender was an intended provocation, not an ‘innocent passage’ as the British government had originally claimed.

The BBC acknowledges this but insists on the false claim that the British move was legal:

Following the controversy generated by HMS Defender’s mission, the documents discovered in Kent confirm that passage through the TSS was a calculated decision by the British government to make a show of support for Ukraine, despite the possible risks involved.Was this gunboat diplomacy?It was certainly the use of a warship in pursuit of diplomatic goals. But its primary objective was not to “poke the Russian bear” (a phrase and sentiment conspicuously absent from the documents). This was all about freedom of navigation and a clear endorsement of Ukraine’s sovereignty, following Russia’s annexation of Crimea in 2014.

Meanwhile Russia has adopted new policies on how to handle repeats of such provocations. Until recently the response from the Russian border guards to infractions in its territorial waters was the firing of machine canons as warning shots followed by aerial bombing of the target. The bombing of a ship could lead to significant casualties. The new policy will allow more nuanced responses:

The Russian Ministry of Defense is creating a unified procedure for Russian aviation against ships violating the state border in response to the incident involving a British warship in the Black Sea on June 23, Izvestia writes. The new regulations will cover the use of lighter weapons to reduce the risk of serious military incidents since the use of conventional aerial bombs can be too dangerous….The regulations are now under the consideration of the main command of the Navy and the Aerospace Forces. It will revise the set of weapons that aviation can use to fire warning shots against intruders. A proposal has been put forward to abandon the use of aerial bombs in favor of unguided aircraft missiles, sources in the military department told Izvestia.

The next ship that tries to repeat the HMS Defender’s stunt will leave with some holes in its hull and upper structures.

The other main part of the leak is about U.S. requests to Britain to leave special operation forces in Afghanistan even after the NATO pullout:

[O]ne document, addressed to Ben Wallace’s private secretary, and marked “Secret UK Eyes Only”, outlines highly sensitive recommendations for the UK’s military footprint in Afghanistan, following the end of Operation Resolute Support, the Nato operation currently winding down in the wake of President Biden’s decision earlier this year to withdraw American forces.The document discusses an American request for British assistance in several specific areas, and addresses the question of whether any British special forces will remain in Afghanistan once the withdrawal is complete.Media reports have already suggested Britain is considering leaving some forces behind.

To keep special operation forces in Afghanistan without the backing of air support and a well protected logistic train would be lunatic. There will soon come a phase in Afghanistan during which the Taliban will fight against local warlords and drug kingpins in what will be number of highly chaotic battles. The Brits know this:

“Any UK footprint in Afghanistan that persists… is assessed to be vulnerable to targeting by a complex network of actors,” it says, noting that “the option to withdraw completely remains.”

The reduced presence of Nato forces “is already impairing the situational awareness that we (and the US) used to enjoy across the country”.

The ‘leak’ to the BBC may not have come out of the Ministry of Defence or the military. There have been reports in the British press that the Foreign Ministry had opposed the decision to send the HMS Defender through Crimean waters:

In a report released on Thursday night, the [Telegraph newspaper] – known to be close to Prime Minister Boris Johnson – alleged that Foreign Secretary Dominic Raab had “raised concerns” about the mission, proposed by defense chiefs, in advance. He was reportedly worried that the move could hand a potential victory to Moscow.The account of events claims that Johnson was ultimately called in to settle the dispute.

The ‘leak’ may thus to be a round in a fight within the British cabinet over a more or less aggressive foreign policy.