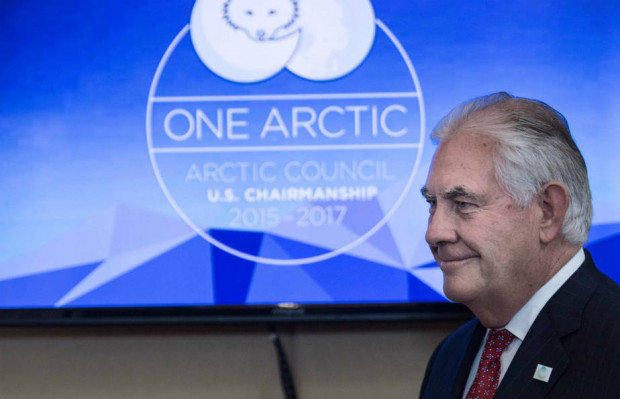 Above Photo: U.S. Secretary of State Rex Tillerson, a former Exxon CEO, brought the United States’ two-year chairmanship of the Arctic Council to an end this month. Credit: Nicholas Kamm/Getty

The U.S.-edited draft, obtained by InsideClimate News, shows how the Trump administration targeted climate actions. It’s a strategy we could see in future meetings.

The day before the Arctic Council met for its biannual ministerial last week, the United States requested six changes to the intergovernmental declaration that was to be issued—each of which weakened the language on climate change.

The Arctic Council, an intergovernmental body representing all eight Arctic states, does not make policy, but the diplomatic work accomplished there is intended to trickle back to the countries and result in changes. An important part of that is the declaration issued at the end of each two-year chairmanship, which is signed by top officials from each country, to acknowledge the scientific and diplomatic work that was accomplished and to state the council’s goals going forward.

The last-minute move by the United States to weaken the document can be seen as a test case for what we can expect at larger, more consequential meetings of international organizations dealing with global warming issues and policy as President Donald Trump rolls back U.S. climate policies and backslides on international commitments.

At last week’s meeting, Secretary of State Rex Tillerson brought the United States’ chairmanship to an end and passed the torch to Finland. When the declaration was released, it was applauded by some for its inclusion of language about the Paris climate agreement and climate change.

“There was a great deal of debate as to whether or not climate would even be addressed in the declaration,” Sen. Lisa Murkowski (R-Alaska) said at a public event on Wednesday. “It is significant to note that not only was it addressed, it was acknowledged in the Fairbanks declaration that climate change is happening, that we’re seeing impacts in the Arctic at twice the rate as in other places, and it is attributable to emissions.”

Whit Sheard of the Circumpolar Conservation Union, an observer to the council, said he was relieved to see the final text. “I thought it was pretty impressive,” he said.

But those in the negotiations know how much more aggressive it could have been.

“Ninety-nine point ninety-nine percent of the people who read the declaration will not have the benefit of hindsight and will think it’s pretty good and we agree with that,” said Jim Gamble, who represents the Aleut International Association, a permanent participant on the council. “There’s an effort to move the climate agreement and sustainable development goals forward. But for those of us who are involved in the whole negotiation, we know at various times there was stronger language.”

Behind the scenes, it had been a mad dash to get the declaration finalized.

The group of negotiators—which includes representatives from each of the Arctic countries and from six indigenous groups that are permanent participants on the council—had planned to meet for an hour on May 10 to finalize grammar and other trivial changes.

But on May 9, the negotiators received a new version of the declaration from the United States that asked for six changes—all downplaying climate risks, the need for the Paris treaty or ambitious renewable energy goals. Negotiators spent a long morning huddled around a table, working line-by-line through the document projected on a screen. The other nations challenged the U.S. on every point, often joined by the indigenous groups.

Because the negotiation process is closed to the public—and even to the groups with observer status at the Arctic Council—draft versions of the declaration are confidential. InsideClimate News obtained a copy of the May 9 version, with track-change suggestions by the State Department’s acting assistant secretary, Judith Garber. ICN spoke with multiple sources who were part of the negotiations. They all spoke on the condition of anonymity because of the confidentiality of the talks.

The Arctic Council is a consensus body, and its declarations are hammered out over a series of negotiations. As the outgoing chair country, the United States under President Obama wrote the first draft.

The Fairbanks Declaration was the result of three negotiations—in Juneau in mid-March, in New York in April, and on May 10, the day before the ministerial.

After the meeting in New York, the general consensus was that the document was largely finalized—until the changes from the United States arrived on May 9.

It was like the United States “just dropped a bomb on a multilateral forum at the last minute,” said one council delegate. “I don’t think any of us were mentally prepared that we were now going to be in a make it or break it situation.”

The first change that the United States proposed fell near the end of the preamble and had to do with the great elephant in the room at any climate-related talks the U.S. is now involved in: the Paris climate agreement. Trump’s policies would all but ensure the U.S. would miss its Paris pledges, and the president’s advisers have been caught up in an internal struggle over whether to leave the treaty or simply backslide on the country’s commitments.

The version of the declaration that the countries had previously agreed on noted the entry into force of the Paris Agreement “for the parties to that Agreement” and encouraged its implementation. The U.S. objected to that language, and the final version reflects a softer approach.

Immediately following that paragraph, the preamble had called for the commitment to working toward full implementation of the United Nation’s Sustainable Development Goals by 2030. The goals, established by the UN in 2015, seek to end poverty, improve health and education and combat climate change. They include ambitious clean energy targets.

The U.S. called for the deletion of that section of the declaration. Led by Finland, the other parties pushed back, and the section was put back in, albeit in less forceful terms.

Lower down, in a paragraph devoted to energy, the United States contested a reference to renewable energy. Where the earlier version reiterated “the need to improve the access of Arctic communities to clean, affordable, renewable and reliable energy sources,” the U.S. wanted to delete the word “renewable.”

Many countries, as well as the indigenous groups, fought this, and the word “renewable” made it back in—though in a less prominent place.

The fourth change is the only one that the United States was fully successful in pushing through. The earlier version noted “with concern that the pace and scale of continuing Arctic warming will strongly depend on future emissions of greenhouse gases and short-lived climate pollutants.” At the request of the United States, the word “strongly” was removed.

The negotiators landed on middle ground, calling it “the most serious threat.”

The sixth and final proposed change dealt with the findings of a report produced by a working group of the Arctic Council called “Snow, Water, Ice and Permafrost in the Arctic.” The report presented the stark and far-reaching implications of climate change in the Arctic, and the earlier version of the draft included some of those findings.

The council noted “with concern that the Arctic Ocean could be largely free of summer ice in two decades, that melt processes in the Arctic may have greater impact on global sea level rise than previously estimated, and that changes in the Arctic may be affecting weather in mid-latitudes.”

Each point referred to a finding of the SWIPA report, a study that involved hundreds of scientists and which synthesized peer-reviewed science on various Arctic-related issues.

The United States asked to delete that paragraph entirely.

Though the final version “notes with concern” the report’s findings and calls for the adoption of the report’s recommendations, it does not include the actual findings.

“That was probably the biggest change in the document,” said a person who took part in the talks.

Because very few people actually read the voluminous reports issued by the council, but many more read the declaration, it was a missed opportunity.

After the text was finalized during the negotiators’ long morning meeting on May 10, it was sent to Tillerson, who was on a flight to Fairbanks at the time. He signed off on the document within about 20 minutes, according to a person who took part in the talks and spoke on the condition of anonymity.

By the time the senior ministers from the Arctic countries—Canada; Denmark; Finland; Iceland; Norway; Russia; Sweden and the U.S.—walked into a planned dinner that evening, each of the countries had agreed to the new language.