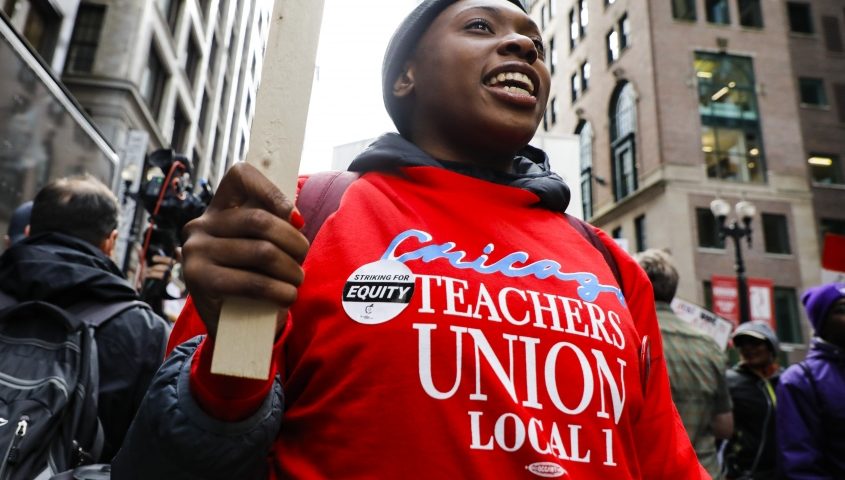 Above: Chicago teachers went on strike in 2019 and won. (Xinhua via Getty Images)

As a Chicago Public Schools (CPS) student from first grade through high school, and in my 17 years of teaching in the system, none of my schools ever had a full-time social worker or nurse every day of the week.

In the first contract the Chicago Teachers Union (CTU) secured in the era of legalized public sector bargaining, in 1967, the language states: “a plan shall be devised to make available to teacher nurses a list of vacancies to which they may indicate their desire to transfer.” That language, providing no firm guarantee of staffing ratios, remained virtually unchanged for half a century. All subsequent contracts until 2019 include no references to bilingual education, dedicated staff and resources for our homeless students, case manager positions for our diverse learner population, sanctuary language to protect undocumented students from ICE, living wages for our lowest-paid paraprofessional members, or a dedicated article on early childhood education. Now, that’s all changed.

After 52 years of struggle, and an 11-day citywide strike, we were finally able to secure these critical demands—and more. We won 180 case-manager positions, 20 English language program teachers, full-time staff for homeless students, up to $35 million to lower excessive class size and even nap time for our little ones. This dedicated effort to win seminal staffing supports and educational justice for CPS students did not happen overnight—it’s been a long and protracted fight for the schools they deserve.

During the lead up to the 2019 strike, the editorial pages of the two major newspapers in town, the Chicago Tribune and the Chicago Sun-Times, took turns slamming us for intransigence, greed and idealism, often in the same sentence. The Sun-Times ran an editorial in the days before the strike that demanded we “Take the deal” and stated we “should accept the latest contract offer from the Board of Education, a sweet deal that most Chicagoans would just love to get.” Prior to the strike, Mayor Lori Lightfoot offered a 16% raise over a 5-year agreement, a salary offer that the CTU eventually accepted. However, none of the central issues raised from when the strike began to when it ended had anything to do with that initial salary offer.

In the last months of 2018, the CTU collected hundreds of proposals from our 27,000 members. Of the hundreds of submissions, many described how to fix a broken and anxiety-ridden teacher evaluation system, how to ramp up preparation and collaboration time, adequate pay and benefits, and more. There were also a number of ideas that went well beyond a traditional collective bargaining agreement. One proposal demanded the school district provide housing for all 18,000 homeless students in the district by creating affordable housing through a real estate transfer tax, corporate head tax and utilizing the city’s Tax Increment Financing (TIF) program. Despite Mayor Lightfoot’s claims to support a progressive agenda that reflected the CTU’s vision for schools, reality proved more complicated.

Lightfoot campaigned on a promise to prevent a strike by addressing our key concerns and demands. Yet, during negotiations, her team refused time and again to meet them.

Once CTU went out on strike on October 17, Lightfoot claimed the contract was not the “appropriate place” to address the needs of homeless students. While she promised to add more social workers and nurses to the school budget, she refused to put it in writing and make those commitments explicit within the collective bargaining agreement. By the end of the strike, we made sure that both supports for homeless students and guarantees for more social workers and nurses were indeed put in writing. At the inception of the strike, Mayor Lightfoot was adamant that there was no more money for our contract. But by the end, we won tens of millions more dollars in the new contract.

In 2010, we suggested that the Chicago Board of Education tap into the TIF program—a system where decades worth of property taxes are frequently diverted from schools, parks and libraries to support developments in the wealthiest parts of the city. At the time, Mayor Richard M. Daley’s chief negotiator for the teachers’ contract, Jim Franczeck, told us that “TIF is too complicated” and that the funds were unavailable to schools due to a firewall between the city and school budgets.

By 2016, we cracked the purported TIF firewall and forced then-Mayor Rahm Emanuel to unleash a record $87.5 million to stave off a strike. This year, Mayor Lightfoot, followed suit and released another record TIF surplus of $163 million to the public schools.

On top of winning new funding streams, our broader social justice demands built upon victories in the recent Los Angeles teacher strike, as well as Boston’s teacher contract campaign that won language on class size restrictions. In no small way, the 2019 CTU strike was connected to a rising movement of teachers nationally that has fundamentally altered the political and labor landscape in the United States.

When we struck in 2012, the action was largely defensive in nature and came on the heels of Scott Walker’s attack on collective bargaining rights in Wisconsin. This year’s strike represented a move into offense—beyond efforts to stop school closings, vouchers, bankruptcies, pension liquidation or state take-overs. Instead, we’ve added about 750 new positions into our schools, staffing that will dramatically increase investments into our classrooms for the first time in decades. We’ve also added new language that establishes “sanctuary schools,” requiring CPS to prohibit the entry of ICE agents into our buildings unless they have a warrant. The new agreement also provides critical immigration and legal services to our students and their families.

The labor movement will look back on the 2019 strikes in Chicago and LA as the time when #RedForEd began to supplant austerity and corporate reform with educational equity and investments into our Black and Latinx school communities. While we have a way to go before public schools in Chicago match the school funding received by wealthy suburban districts, this agreement gets us closer.

One of the keys to our victory was labor solidarity. Chicago teachers struck alongside the 7,000 school employees in SEIU Local 73, which did not occur in 2012. These school workers also won large-scale victories in their contract, and by standing with us on the picket lines, they showed the power of true collective action.

The victories in our strike built upon years-long efforts to bring Chicago charter school teachers into the CTU, aligning 11 charter school contracts. This strategic choice led to the first charter school strikes in the nation’s history, and won provisions on class-size and sanctuary schools that set the stage to win them throughout the district.

To win more, we teachers should consider partnering with private sector union struggles. Imagine if we had been able to join forces with the United Auto Workers in their labor struggle with GM, or coordinated with warehouse workers to shut down the region’s supply chains? Such an approach could help build the social power necessary to advance a set of regional worker demands to significantly alter the political and economic landscape for all workers.

When I was a first-grader in CPS in 1984, there weren’t social workers or nurses in every school, no case managers, no coordinators for homeless students, and limited adherence to legal limits on special education, bilingual and early childhood state laws. On November 16, over 81% of CTU members ratified a contract that possesses all of those components. While there are many demands we were unable to win, we made massive strides toward equity in the classroom.

Throughout history, social movement struggles have always been protracted. It’s taken three contract cycles for the CTU to turn back nearly 40 years of attacks on our public schools. It’s a shift made possible through strike action coupled with a burgeoning national teachers movement—and taking risks to lift up working-class demands that go far beyond traditional collective bargaining.

Jackson Potter is a Chicago Teachers Union trustee, member of the Big Bargaining Team and a teacher at Back of The Yards College Prep.