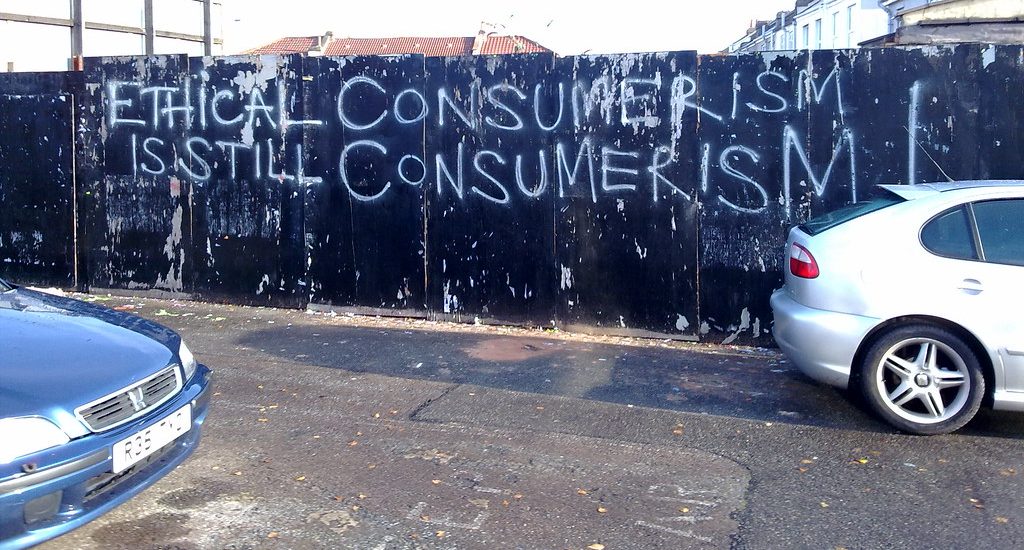 Lee Camp: Ads All Tell Us To Kill Our Future

Above photo: “Ethical consumerism” by edmittance .

A SUSTAINABLE FUTURE! Get it now before it’s TOO LATE! Half-off, for a LIMITED TIME!

Forgive me, Father, for I have sinned. I am a hypocrite.

(Although I’m not sure why I’m talking to my dad about it. He doesn’t read my columns because he’s too busy watching survival reality shows set in Alaska. . . . Maybe I’ll factor something about eating a squirrel into the coming paragraphs to attract his attention.)

It’s the holidays. It’s the buying season. You’re supposed to run out immediately and buy everything you can afford — and actually much more than you can afford — because you can dump everything on credit cards and not worry about paying it off until later. And later won’t suck — the stores promise! But of course truthfully it will. Later will suck. Later always sucks, for most people. But no matter — go quick and get the brand new model of the thing you didn’t like the first time around. Better yet, buy it for someone else because even though they might get as little use out of the gadget as you did, they won’t be able to tell you that — so they’ll just say “Thank you!” because it’s part of the social code. They’ll say you’re the bestest aunt or uncle or cousin or friend or Uber driver who awkwardly gave them a gift for no reason.

That’s how it sounds, the entire holiday season, even during a pandemic. And we practically never hear criticism of this all-encompassing gush of consumerism painting over our mainstream airwaves because in order to get the career that allows someone to be on mainstream airwaves, they have to be a part of it, let it fill their veins and give it final edit on their thoughts. Even I am a small part of it. I’m not on the mainstream media, but I have a TV show and a touring comedy career (on non-pandemic years) and therefore at various points in the past I’ve sold books and mugs and CDs. I still sell my books. And when you’re a part of this system, you have to make a choice: Do I behave like a bit of a hypocrite and critique a system that absolutely needs critiquing? Should I be the fish critiquing the water he himself swims through? Or do I never criticize this consumerist system because I’m a part of it?

I’ve chosen the first path but the vast majority of on-air personalities choose the second path. Never question capitalism, never question consumerism, because doing so might be deleterious to your career, your brand, your business. And that’s why the class war perpetrated by the assholes at the top continues unabated, with so little criticism on mainstream TV. Sure, you’ll see an article here or there about how the billionaires have gained $1 trillion during the pandemic, but such coverage isn’t common and even those articles can’t say the holy words “capitalism” or “consumerism.” The system will not be critiqued or questioned because at the end of the day, the rapaciously rich are the ones who hire the on-air personalities who could ostensibly rhetorically tear apart the machine. And in the rare case that a “personality” scores the job, fails to self-censor, goes rogue, and then questions our unfettered market economics — then they’re let go, forced out, or otherwise put out to pasture.

Point being, even though I’m not on the mainstream airwaves, I’d rather be the slight hypocrite than the useful idiot of disaster capitalism. There’s a great book called Advertising Shits in Your Head by Matt Bonner and Vyvian Raoul. It’s funny and smart and beautifully done. But guess what — it’s a book with a cover. What is the cover? It’s basically an advertisement for the book. And since that book is put out by the same publisher as my book, the publisher — unbeknownst to me — put an ad for Advertising Shits in Your Head in the back of my book. . . . Let me repeat that. There’s an ADVERTISEMENT for Advertising Shits in Your Head in my book! I don’t want that promotion shitting in your head in my book. My book is meant to shit in your head all by itself.

Despite that, the book Advertising Shits In Your Head is great and on point. And I’d rather see a small level of hypocrisy than allow the insidious manipulative nature of advertising to go uncritiqued and unobstructed.

But of course the problem is far larger than just advertising. Our modern culture, due in no small part to the market economy, values and favors and supports and highlights materialism and competition and domination and selfishness. For the most part, it does not highlight helping others. While almost every mainstream commercial is based on wants or fears (and I suppose even fear is a want of security), we don’t see ads telling people to go sit at the train station and help old people down the stairs. There are no commercials during Monday Night Football pushing Americans to feed a hungry person or house a homeless woman or plant a tree or sexually pleasure a lonely guy. No, there is never any promotion of altruistic behavior except for the occasional massive corporate charity advertisement that essentially says, “Send us money so that we can spend it on commercials like these!” That’s the closest you’ll get to a promotion for helping others.

Sure, around this time of year there are myriad television spots about giving gifts to people, but at their core, those are still commercials for buying things (to give to others). There aren’t ads for simply and purely helping people. There are no ads for regifting in order to save resources. Our airwaves do not runneth over with publicity for volunteering. So at the end of a day — it’s all still about buying and consuming and spending. Any activity that isn’t at least tangentially related to consumption is actually a tiny little threat to the capitalist system. Such activities intrinsically — in a subconscious manner — promote behavior that does not feed into the beast.

Every time you avoid what the market economy wants you to do, you help push towards a better system, towards an evolution beyond this shithole machine. Every time you donate something to someone, every time you volunteer with no reward or payback, every time you repair something rather than buy a new one, every time you refuse the plastic shit pushed upon you by a cashier — you are moving our culture subtly, imperceptibly toward a new horizon. (Honestly, trying to get a grizzled mustachioed cashier not to give you 12 plastic bags and 7 plastic straws and 42 napkins when you buy a single bagel with cream cheese is a Sisyphean task. He’ll fuckin’ fight you to make sure you walk away with a whale-suffocating amount of plastic to wrap around your single onion bagel. Saying, “No bag, no straws, no napkins” to him is somehow worse than telling him his recently-deceased mother had a tryst with a mangy donkey. I don’t know why. I don’t know what goes on in the heads of cashiers that make them so eager to give you enough plastic to replace an entire sex shop’s dildo collection.)

Point being, as our world fills with plastic and fumes and garbage and oil and oil and oil, it becomes evermore clear that we cannot dominate nature because we are nature. Ironically by fully dominating the natural world — we kill it. Because we have forgotten our place, we have forgotten how the ecological system works. We have forgotten that nature feeds and sustains us. And every time someone buys a car “because the Christmas commercials said it was a good idea. I already have one, but they said I should be good to myself and reward myself with a backup SUV just in case the first one doesn’t match my outfit that day” — every time we buy shit we don’t need, throw out food we don’t want, trash clothes we shouldn’t have bought, buy people five gifts when one would suffice — every time we do it, we die a little.

These are small, miniature deaths — for the environment, for our souls, for our beings. (I guess there’s a reason that the secondary definition of “consumption” is “a progressive wasting of the body.”) Each of these consumptive, wasteful actions makes us feel good for a moment, for a brief fleeting instant, and then that feeling quickly fades as the emptiness rushes back in like tidal water filling a hole on the beach. While we all work in large ways to evolve past this system, you and I can also take small steps. They won’t change the big things. Avoiding buying from Amazon and avoiding filling up your car at ExxonMobil and avoiding getting the plastic bags won’t save the planet. (I’m sorry to inform you.)

Only true revolutionary change will create a sustainable future. But each of these smaller actions is an ideological wisp that can make up gale force change. They are the droplets that fill a raging river of awakening. Those small steps are the reminders that you and I live in the Matrix™, in a false reality — an inverted moral universe — that rewards consumerism, selfishness, greed, and war while scoffing at minimalism, altruism, and peace. Those small reminders help us step outside the garbage virtual reality. They are small victories, they are small voices whispering that we are human, we are more than our economic system, we are nature.