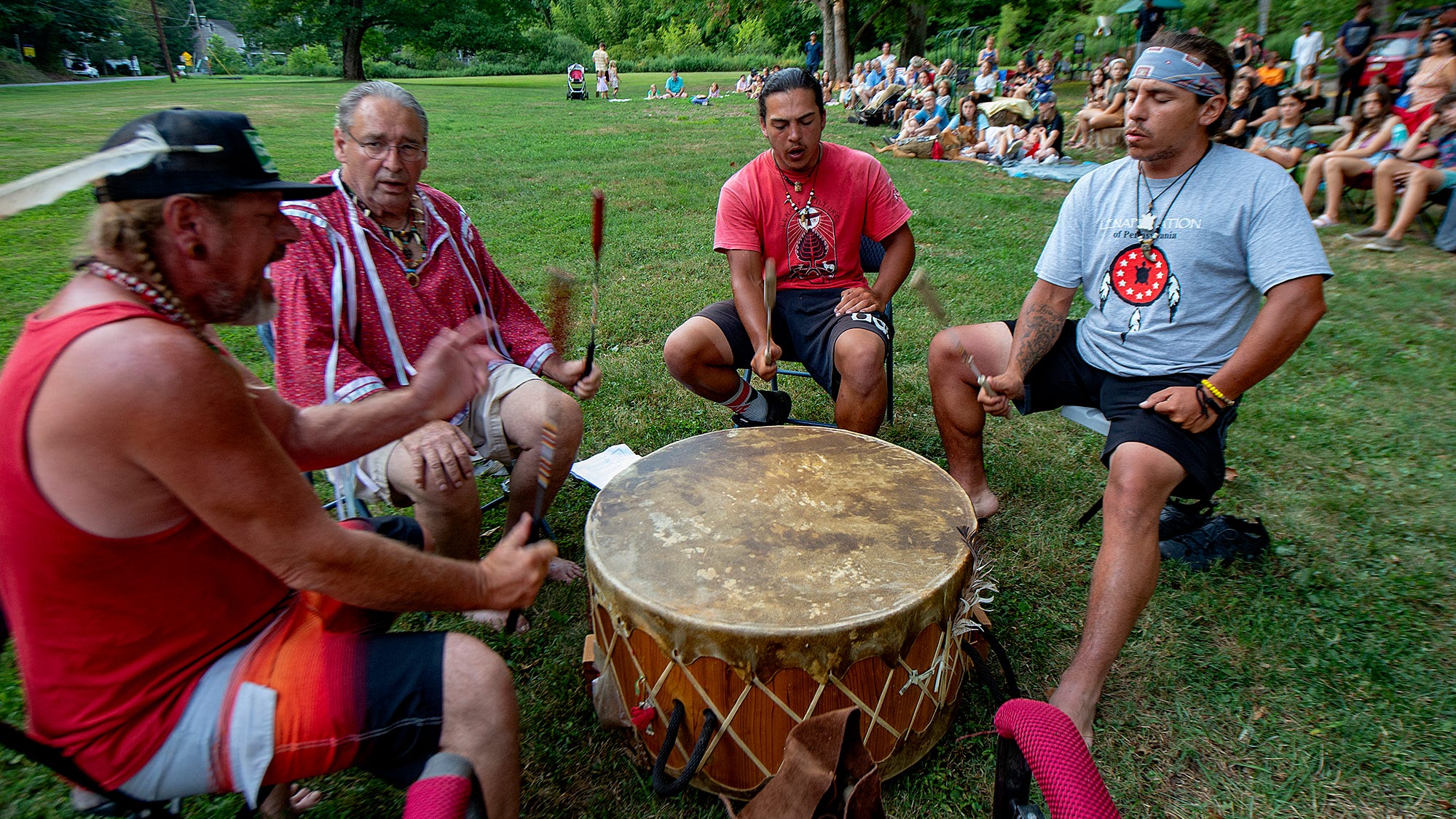 Above Photo: Lenape Nation of Pa. Cultural Center is hosting another Rising Nation River Journey in the 20 year of the Treaty of Renewed Friendship. Here is why. Nur B. Adam / Bucks County Courier Times.

Hundreds of years after they were forced from their ancestral home along the Delaware River, the Lenape Nation of Pennsylvania is still fighting for perhaps the most precious resource of all.

Pennsylvania does not officially recognize the Lenape Nation or any Native American tribe, a fact that strikes to the very core of Lenape Nation member Adam Waterbear DePaul.

“The fight for recognition has been incredibly disappointing so far. Pennsylvania is the only commonwealth to never recognize indigenous people, and we are trying to change that,” DePaul added. “Right now, we are taking steps to become state recognized. But it’s hard to say how that will turn out.”

DePaul is bringing attention to the Lenape Nation’s quest for official recognition and its longstanding commitment to the environment on the Rising Nation River Journey, during which members are paddling and hiking through and along the Delaware River, culminating with the Lower River treaty signing in West Cape May, New Jersey.

The tour started in New York and made stops this weekend in Bucks County.

“(The River Journey) brings so many important things together. First, it raises awareness about the Lenape people, which is so important to us because we’ve been so erased here — and especially those of us who remained here for centuries either under hiding or in forced assimilation,” DePaul said. “It also brings together commitments to serve as good stewards for the environment, our homelands and the Delaware River.”

According to the Department of the Interior’s Bureau of Indian Affairs, as of 2020, there were 574 tribal entities recognized and thus eligible for federal funding and services. The Lenape Nation of Pennsylvania is not among them, although the Delaware Tribe of Indians, is one of three Lenape tribes that is recognized and has established a duly elected president, tribal lands and courts in Bartlesville, Oklahoma.

Gaining state recognition is a step in the process to being recognized on the federal level, advocates say. That will require legislative efforts in Harrisburg. Efforts nearly 20 years ago failed, and in the current session in the Pennsylvania legislature, there isn’t a bill submitted that directly deals with state recognition of Native American tribes.

According to the West Philadelphia Collaborative History project, sponsored by the University of Pennsylvania, archeological evidence indicates the Lenape inhabited the region centuries before the Europeans arrived and established various villages along the Schuylkill River and its tributaries.

While Pennsylvania doesn’t recognize the Lenape, Bucks County has officially acknowledged the Lenape people as the first inhabitants of the lands that now make up its boundaries.

“Many of the county parks, historic sites, nature centers and place names acknowledge the Lenape’s role as the original caretakers of this land through exhibits and signage,” reads a portion go the county’s website dedicated to the Lenape. “Prior to the arrival of European Settlers in the 17th century much of what we know as NY, NJ and Eastern PA were Native American territories held by the Lenape people who, for thousands of years, were the caretakers of these lands.

“At this time the region, including all of what came to be incorporated as Bucks County, was predominantly primeval forest crisscrossed with Lenape trails, campsites, quarries and scores of villages.”

William Penn and the Lenape interacted at the right place and time, said Pennsbury Manor Executive Director Douglas Miller. The manor, on the river in Falls Township, served as one of Penn’s chief residences, and Miller and staff work to preserve and highlight the history of the stately manor, its lands and Penn’s life.

“Penn’s success wouldn’t have been the same if he bumped into a different cultural group,” Miller said. “The Lenape were peacemakers and middlemen who welcomed Penn. And Penn was the right colonial governor to work with the Lenape at the right time.”

Yet it was also in Bucks County where the tribe lost much of its land to colonial authorities.

The Walking Purchase land swindle in 1737 forced the tribe to turn over its land to colonial authorities who claimed to have found a so-called lost treaty adopted in 1686. Historical records indicate that colonial authorities claimed to have found this treaty ceding a tract of Delaware tribal land between the fork of the Delaware and Lehigh rivers that extended as far as a man could walk in 1.5 days — roughly 40 miles.

In the end, after Penn’s sons and Bucks County Sheriff Timothy Smith hired the fastest runners they could find, the Lenape were stripped of 1.2 million acres of land.

“They were pushed west to the Ohio River Valley, including to the Moravian settlement of Gnadenhutten, where 96 Lenape and Mohican children, women, and men were massacred by Pennsylvania militia in 1782,” said Dr. Paul Rosier, Villanova University’s Mary M. Birle Chair in American History and a supporter of Lenape recognition by the state.

“In short, the Lenape people paid a stiff price during the settlement of Pennsylvania. Lenape, as well as all Native people, do not want their history forgotten.”

In 1830, President Andrew Jackson signed the Indian Removal Act, which led to the forced removal of hundreds of thousands of indigenous people from their lands in the east and forcing them to vacate lands they had lived on for generations.

Why Recognition Matters To The Lenape Tribe

Federal recognition “comes with the ability to get federal financial aid for different elements,” Pennsbury’s Miller said, adding that recognition also signifies that they are independent nations within our country.

“It also deals with things such as repatriating their ancestors and reclaiming historical artifacts,” said Miller, who has spent time with the Delawareans in Oklahoma. “So, non-federal groups like the Lenape Nation of Pennsylvania are not allowed to receive the physical remains of their ancestors dug up by archeologists. It’s all of that, plus federal funding and tax relief.”

Rosier, who authored three books on the history and plight of Native Americans, said much of the commonwealth was Lenape land, before “British colonists used fraudulent treaties and violence” to force the tribe out of Pennsylvania.

“For many years, the opposition to granting recognition to the Lenape among Pennsylvania lawmakers … centered on their belief that the Lenape wanted recognition solely to establish a casino,” Rosier said. “In 2003, Lenape representatives agreed to sign a state compact that precluded them from building a casino, but the opposition continued.

“For the Lenape, their fight for recognition would provide funds for scholarships and cultural programming as well as acknowledge the Lenape’s role in the creation of Pennsylvania; Lenape place names such as Conshohocken and Manayunk dot Pennsylvania’s map,” Rosier added. “Delaware and New Jersey have extended official recognition to Lenape groups, but not Pennsylvania, which benefitted the most from fraudulent treaties.”

DePaul, also the official storykeeper of the Lenape Nation of Pennsylvania, said there has been sporadic support from local elected officials and the Lenape had “frank conversations” with several of them regarding recognition and the river journey.

“The support for the river journey from the community is astounding,” DePaul said. “That has been so important for our people, and it does build momentum that will continue in the following years to produce real things, real initiatives for our people and the environment.

“Especially in the current vacuum of any formal government recognition, it is even more vital in this environment to realize how much support we have from the community.”

The journey includes a partial paddling of the Delaware River, and the signings of the Treaty of Renewed Friendship between the Lenape and the present inhabitants of the river basin.

“It begins way up toward the mouth of the Delaware River in Hancock, New York, and the goal is to paddle the Delaware, which is so important to our people,” DePaul said, adding that some portions of the river are restricted to commercial traffic only, and in those cases, the journey will leave the water and continue on foot. “And all along the way, we stop to hold signings of the treaty of renewed friendship.

“The treaty is not a legally binding contract, but it symbolically asks two things: to acknowledge the Lenape as the indigenous people the land and to continue being good stewards of that land.”

Maya Van Rossum, chief executive officer of the Delaware Riverkeeper Network, a nonprofit dedicated to the preservation of the Delaware River Watershed and signee of the treaty, said the network “holds the Lenape People of our region in high regard” and respects their tremendous leadership and care for protecting our “beautiful Delaware River” and region.

“The Lenape People are the original caretakers of our river and region,” Van Rossum said. “The knowledge, history and leadership they bring to our communities and environmental protection efforts is simply irreplaceable.

“It is a true honor to be asked each year to renew our relationship with the Lenape people and for me personally to be asked to speak as part of this amazing annual tribute and journey.”

This journey marks the 20th anniversary of the original treaty signed on Aug. 24, 2002, at Pennsbury Manor. The treaty is re-signed every four years in conjunction with the river journey.

That treaty of renewed brotherhood was signed by the Lenape and a number of organizations, including environmental groups, churches, historical societies, and sincerely committed individuals, who wish to actively support the Lenape culture and to help sustain their people, language, and way of life.

It also serves as a reminder of the endurance of the tribe.

“We have always been here,” DePaul said. “And we are still here.”