Calls for a general strike have long been a staple of “revolutionary activity” on the US left. During moments of crisis and militancy—from the mass firing of air traffic controllers in 1981 to Occupy Wall Street and last winter’s federal government shutdown—rousing speeches are invariably made and motions duly adopted, which urge all workers to walk out in protest.

Such efforts represent a triumph of hope over experience. In our entire history, only a handful of labor disputes have mushroomed into broader, city-wide work stoppages. On the “left coast,” this has occurred, most recently, in San Francisco in 1934 and Oakland twelve years later.

The one notable 21st-century exception to this historical pattern was the “day without immigrants” protests in 2005, when talented organizers, with deep roots in their own immigrant communities, managed to mobilize up to five million people in 160 cities.

In contrast, most general strike calls—if workers even knew about them– fall on deaf ears because of the widespread disconnect between individual advocacy of such action and the working-class base and organizational leadership necessary to undertake it. 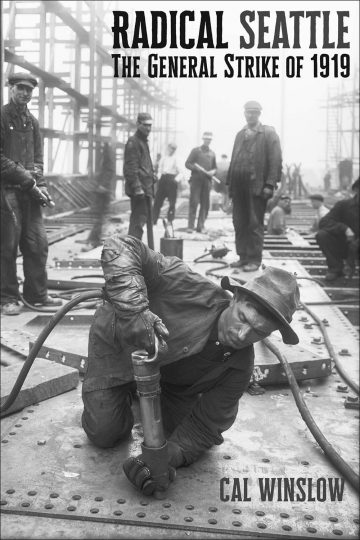 Radical Seattle: The General Strike of 1919
by Cal Winslow

A century ago, as we learn from labor historian Cal Winslow, there was far more grassroots connectedness between would-be instigators of general strike activity and unions in Seattle, the author’s hometown. Winslow’s new book, Radical Seattle: The General Strike of 1919 (Monthly Review Press) hows how “labor’s most spectacular revolt” was many years in the making. It drew on the experience of previous “workplace struggles and political battles, in which working people built an infrastructure for radical politics” and became class conscious “political actors in their own right.”

The Seattle general strike was coordinated by an activist central labor council (CLC), quite unlike the multi-union bodies that exist in Seattle and other U.S. cities today. The 110 local unions affiliated with it operated under the banner of the American Federation of Labor (AFL). But, as Winslow notes, CLC leaders were sympathetic to industrial unionism and they had previously used the threat of a general strike “as a bargaining chip in fights for wages and benefits.”

In January of 1919, thirty thousand Seattle shipyard workers went on strike for better pay and working conditions, in the wake of a punishing World War I wage freeze. At a CLC membership assembly in Seattle’s “Labor Temple,” the local Metal Trades Council asked for broader union solidarity—in the form of a city-wide walk-out involving workers of all kinds. More than 65,000 union members responded with a shut-down that lasted five days and engaged thousands of others in the community.

During that general strike, a 300-member committee, largely composed of rank-and-file representatives, coordinated its activities. Their role included taking responsibility, in a highly disciplined way, for “the health, welfare, and safety” of a city then populated by 300,000 people. As Winslow writes:

“Garbage was collected, the hospitals were supplied, babies got milk,      people were fed, including some 30,000 a day at the strikers’ kitchens. There may have been no other time, before or since, when no one went hungry in the city.’

“The streets were safe, rarely safer—patrolled by an unarmed labor guard. Off the streets, Seattle was a festival—in union halls, the co-op markets, the “feeding stations,” and neighborhood centers where workers and their families gathered. Meanwhile, the worker representatives who packed the rowdy, emotion-filled Strike Committee meetings came prepared—they were making history and the knew it.”

Among those patiently paving the way for this upsurge were radical street speaker Kate Sadler, a critic of unions which excluded black and Asian workers, and Anna Louise Strong, a crusading labor editor who served on the Seattle school board. Like Kshama Sawant today, Strong was a strong left-wing voice much reviled by Seattle conservatives; unlike Sawant so far, she was driven from elected office because of her controversial views.

Sadler, Strong, and others did succeed in turning Seattle into “a Socialist Party stronghold, its members proponents of industrial unionism and thorns in the side of national Party officials who supported Samuel Gompers, conservative president of the craft-based AFL.” The Union Record, with a peak circulation of 120,000, became Strong’s platform for education and agitation about labor causes, at home and abroad.

As Winslow documents, the city also served as a “base camp” for the Industrial Workers of the World (IWW), whose free speech fights, mass arrests, and militant strikes had roiled timber camps and sawmills throughout the Pacific Northwest.  According to the author, many workers held “an AFL card for the job and IWW card for the principle,” creating a working-class culture in which “social democracy and revolutionary unionism intermingled.”

Labor and management foes of the 1919 uprising were greatly concerned that it might lead to a worker take-over of industry, per the IWW’s “One Big Union” scenario. So Seattle employers persuaded federal and state authorities to deploy thousands of soldiers, police officers, and newly deputized civilians against the strikers.  Seattle Mayor Ole Hanson denounced them as Bolshevik agents and threatened to impose martial law. The city’s two major newspapers were filled with fear-mongering headlines and demands to know “under which flag” Seattle workers were marching—the “red, white and blue” or just a red one.

Equally terrified labor bureaucrats responded with “telephone calls, telegrams, a deluge of intimidation, threat and vilification from union headquarters.” The strike was denounced by Gompers and the national AFL. The Teamsters Joint Council in Washington state ordered strikers back to work. Other International union officers threatened to rescind local union charters and seize the property of striking locals.

Unfortunately, too many other west and east coast shipbuilders failed to join the work stoppage which triggered the general strike. This lack of solidarity and industry-wide coordination resulted in members of the Seattle Metal Trades returning to work without achieving their own strike objectives.

Despite this setback, and later attempts to downplay the impact of the general strike on worker consciousness, labor in Seattle remained very “strike prone,” until the recession of 1920-21 hit the city long and hard. The Central Labor Council continued to press for industrial organization, although this running battle with AFL headquarters was not won until the mid-1930s. That’s when some AFL unions created an industrial worker organizing committee and then a rival national federation, the Congress of Industrial Organizations CIO), which remained separate until the two merged in 1955.

Open Shop Conditions, then and now

Winslow’s account of local movement-building in Seattle is extremely valuable for present-day radicals trying to reconnect labor to the left, build new unions, or remake old ones. His history lessons are particularly relevant to the situation of “red state” teachers. They have been organizing and striking under “open shop” conditions in West Virginia, Kentucky, Oklahoma, and Arizona, where bargaining or work stoppages by public employees have no more statutory support than private-sector labor militancy did in Washington state a century ago.

In our modern-day “red states,” neither the American Federation of Teachers or the National Education Association can create formal bargaining units or be legally recognized as the exclusive representative of teachers. Yet thousands of members of both unions—or neither—have been involved in state-wide strike activity.  In the absence of collective bargaining rights, their demands were directed, out of necessity, at governors and state legislators responsible for funding teacher salary and benefit increases or making other public education improvements.

Two years ago in West Virginia, a statewide struggle involving more than 20,000 teachers and school aides was greatly influenced by new rank-and-file leaders. Through membership mobilization from below, they were able to prevent full-time union officials from settling short. And when right-wing Republican legislators tried to nullify some of the gains made during the 2018 strike a year later, teachers took direct action again to defend them.

Before this kind of strike activity developed and spread, it was widely assumed that the only way educators could make real gains was by winning a signed contract with their local school board—like teachers in Chicago, Los Angeles, Denver, and Oakland have done recently, using more traditional strikes for collective bargaining purposes. However, on this familiar “blue state” terrain, fragmentation of union bargaining power is institutionalized via separate bargaining units and different contract expiration dates for each school district. In contrast, recent struggles by teachers in “open shop” America have been far more political, fluid, and worker-driven than contract fights confined to a single city or county school system.

Out of this new mix of local contract campaigning and statewide work stoppages or mass protests–occurring in the absence of formal collective bargaining—public school teachers are forging bonds of solidarity, personal and political relationships, and rank-and-file networks like those which pre-figured the Seattle uprising. Although largely limited to just one part of the public sector today, the recent teacher strike wave demonstrates how worker solidarity can occur unexpectedly and on a large scale, with workplace radicals playing a catalytic role (a process well described in Eric Blanc’s Red State Revolt.)

Anyone interested in encouraging similar trends, elsewhere in the public and private sector, should take a close look at Radical Seattle. Winslow’s work provides not just a window into the world of left-wing labor activism during its last century glory days. His book contains many illustrative examples of socialist agitators and organizers steadily expanding the audience for their ideas, becoming working-class organization leaders, and then transforming ideas into action—in a fashion worthy of emulation by those following in their footsteps today.

Steve Early has been involved in the Communications Workers of America, as a national staffer or rank-and-file member since 1980. He is the author of four books about labor and politics, including Refinery Town: Big Oil, Big Money, and the Remaking of An American City. He can be reached at Lsupport@aol.com.