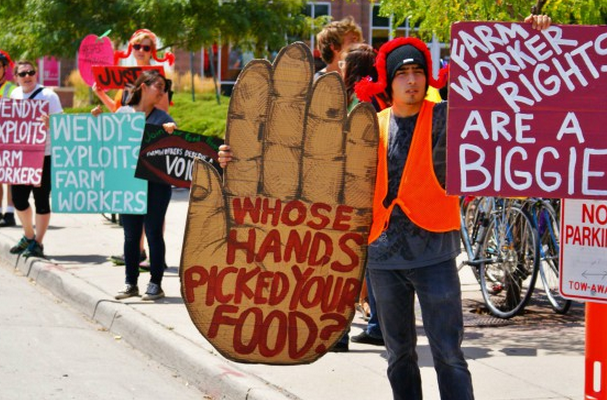 Lessons From Coalition Of Immokalee Workers For Workers

The Coalition of Immokalee Workers and its Campaign For Fair Food hit the road this month as part of its “Boot the Braids” campaign against Wendy’s. (bootthebraids.com)

Having received a Presidential Medal in January for its efforts to combat modern-day slavery, the Coalition of Immokalee Workers, or CIW, and its Campaign For Fair Food hit the road this month as part of its “Boot the Braids” campaign against Wendy’s. The tour spanned colleges and universities throughout the Northeast and Midwest to educate students, as well as create and solidify campus campaigns aimed at pressuring Wendy’s to join the CIW’s Fair Food Program, the only industry-wide social responsibility program in U.S. agriculture. Wendy’s is the last holdout of the big five fast food corporations — McDonald’s, Burger King, Yum Brands! and Subway — from the program, which has extended the Fair Food Code of Conduct to more than 30,000 workers, who make up over 90 percent of the Florida tomato industry. The many improbable successes of the CIW offer important lessons for countless other campaigns, especially those by low-wage workers in other industries.

The strength of the CIW, and perhaps the reason why corporations are treating it differently than the fast food workers, comes down to the organization’s sophisticated organizing strategy. At its heart is an equation: Consciousness + Commitment = Change. The CIW and its allies understand consciousness as education, and commitment as the desire and capacity to act. In order to implement this vision, the CIW has made two key strategic decisions: first, it identified the fast food and supermarket retail corporations as the source of market power determining their pay and working conditions; second, it sought out partners and has developed three key alliances — the Student/Farmworker Alliance, a national network of students and young people organizing to build a food system based on justice and dignity for farmworkers; Interfaith Action, a network of people of faith and religious institutions; and Just Harvest USA, a group involved in activism for sustainable food systems.

Identifying the fast food and supermarket retail corporations as the source of power in the tomato industry, the CIW shifted the focus of its campaign away from the tomato growers in 2001, when it set its sights on Taco Bell. During the “Boot the Bell” campaign, the Student/Farmworker Alliance pressured 25 high schools, colleges and universities to remove existing Taco Bells or prevent the development of new restaurants and sponsorships. In 2005, after a four-year campaign that included a national farmworker boycott of Taco Bell, a 10-day hunger strike in 2003, a 44-mile march in 2004, and four national “Taco Bell Truth Tours” that culminated with protests outside Taco Bell’s national headquarters in Irvine, Calif., Yum Brands!, Taco Bell’s parent corporation, became the CIW’s first corporate partner in the Fair Food Program.

By 2010, the program participants had expanded beyond the fast food industry to both the supermarket and food services industries, and the program had grown to cover 90 percent of Florida’s tomato industry. In June, Walmart, which accounts for 20 percent of tomatoes sold nationally each year, agreed to join the program and to extend it beyond both Florida and the tomato industry for the first time. Walmart will apply the agreement to its tomato growers in Georgia, South Carolina, Virginia and other parts of the East Coast, and also plans to extend the agreement to some of its apple and strawberry suppliers. In January, the CIW came to an agreement with Fresh Market, its 15th corporate partner.

Isolating these corporations as the source of power within their industry allowed the workers to develop, implement and manage the Fair Food Program that now holds the corporations accountable to pay and working conditions throughout the supply chain from which they purchase tomatoes.

The Fair Food Program works by targeting corporate buying power to provide increased wages and humane working conditions for tomato farmworkers. Since 2011, the program has added $15 million to Florida tomato farm payrolls through a “penny per pound” premium the corporations pay to the growers that is passed on to the workers through bonuses administered by the Fair Food Standards Council, the third-party oversight entity that oversees program compliance.

The Fair Food Code of Conduct established the working conditions required for a grower to remain part of the program. If a grower is found to be in violation of the standards, the participating corporations must cease doing business with them. The code of conduct regulates access to shade, water, break time and training; establishes a safety and complaint reporting system; outlaws forced labor, child labor and all forms of sexual harassment; standardizes payroll methods and harvest measurements; and puts in place a worker-to-worker education program that occurs on company time at the farms and provides “know your rights” booklets and an educational video prepared by the CIW for each new hire at participating farms.

The Fair Food Program is founded on the principle that corporations are responsible for the impact of their purchasing power, a principle that is especially pertinent to the ongoing SEIU-backed Fast Food Forward campaign and the UFCW-backed OUR Walmart campaign. These two campaigns also happen to be directed against corporations that participate in the CIW’s Fair Food Program.

Just as the purchasing power of retail corporations in the agricultural industry effectively determines pay and working conditions throughout the supply chain, fast food corporations effectively determine pay and working conditions for fast food restaurant workers, whether they work at a franchised or company-owned restaurant. The fast food corporations, led by McDonald’s, continue to argue that they do not employ workers at franchised restaurants and that the workers should negotiate with the franchisors.

The same problem that once existed for the CIW now exists for the fast food workers: They cannot bargain with the franchise owners because the franchise owners do not have much leeway given the strict operating constraints imposed on them by corporate market power. In this case, corporate market power is manifested through franchising contracts that, by standardizing essentially all franchisee operations and establishing royalty fees based on revenue, allow for only small profit margins for franchise owners. In the case of the CIW, the fast food corporations have acknowledged their market power and have agreed that this power is accompanied by a certain social responsibility; in the case of the fast food workers, they have not.

By signing Fair Food Agreements, fast food corporations and Walmart also acknowledge the viability of organized workers as a negotiating partner, a principle they deny with regard to the Fast Food Forward and OUR Walmart campaigns. According to McDonald’s and Walmart workers, the two corporations systematically obstruct labor organizing and union campaigns while they argue in public that worker strike campaigns are staged demonstrations that do not represent their workforce. Again, the CIW farmworkers and the fast food workers find themselves in essentially similar situations, yet the same corporations treat them differently.

The CIW’s alliance with students began in 2000 at the tail end of its campaigning against the tomato growers, according to Joe Parker, a member of the Student/Farmworker Alliance’s national staff. During the CIW’s 234-mile March for Dignity, Dialogue and a Living Wage from Fort Myers, Fla., to the Florida Fruit and Vegetable Association’s headquarters in Orlando, Fla., students, largely based in Florida near Immokalee, marched with the workers and helped arrange for housing, food and other logistical planning. As CIW recognized the strategic value of student allies who could constantly spread their message and develop new leadership, the formal partnership with the Student/Farmworker Alliance was born.

The network expanded significantly during the “Boot the Bell” campaign, which included farmworkers traveling to campuses to share their experiences directly with students. The Student/Farmworker Alliance is now anchored by two paid national staff members, who work out of the same building as the CIW in Immokalee, and a national steering committee, which meets in Immokalee each January and typically is comprised of 15 to 18 active members within the network from around the country. The national leadership helps to facilitate work that is constantly being done in local chapters throughout the country. After an application process, the outgoing staff and steering committee choose the next year’s group, according to Parker. Terms last from January to December, and neither staff nor steering committee members participate for more than three years. During the selection process, the national staff further emphasizes developing new leadership by seeking a mix of new and experienced members.

The Student/Farmworker Alliance also helps to organize multiple annual events that bring farmworkers in direct contact with students and act as a natural means of recruiting new membership. Periodically farmworkers will travel the country for truth and outreach tours, while each September the students organize what they call an “encuentro” in Immokalee, which serves as a national student conference where students discuss strategy and build relationships with the workers and each other. Attendance typically varies from 60 to 120 people, and students who have expressed interest around the country are invited to attend. The CIW also typically organizes a spring mass mobilization, which unites the farmworkers with their various allies. This year, the CIW will host a Fair Food Parade and Concert on March 21 in St. Petersburg, Fla.

As for mobilizing the farmworkers themselves, the worker-to-worker education program, a key provision in the Fair Food Code of Conduct, is essential to the CIW’s ability to both mobilize the tomato farmworkers in protest and to self-enforce the rights they have earned. Since the program’s inception, the CIW has educated over 22,000 workers face-to-face on company time and property, where they discuss their rights as workers as well as safety standards. They have also distributed “know your rights” materials to over 100,000 workers, which, along with the complaint resolution system codified in the Code of Conduct, empowers workers to act as the first line of defense against employer violation of the program.

“This is how the program survives,” said Sylvia Perez, a CIW staff member. “Workers are empowered to complain and to act as a first round of detection.”

The creation of an educated, cohesive workforce also enhances the CIW’s campaigning capabilities. The CIW continues to wage protest campaigns that, in addition to tours of college campuses and marches, have included worker boycotts, hunger strikes and picketing of restaurants and stores to educate consumers. They also frequently participate in other worker and activist campaigns, offering support that is often reciprocated. In 2013, the CIW joined fast food workers picketing Wendy’s restaurants. And more recently, the organization has visited Migrant Justice, an organization of migrant dairy farm workers in Vermont, and collaborated with the Dream Defenders, a racial justice youth activist group, by visiting a multicultural festival they organized in Miami in June and their statewide congress in December.

Through their strong grassroots organizing the CIW has demonstrated to themselves, the public and the corporations determining their working conditions that they are powerful. In the words of former President Bill Clinton, whose Clinton Foundation honored the CIW last year with its Clinton Global Citizen Award: “[The CIW is] the most astonishing thing politically in the world we’re living in today.”