Outnumbered by more than three to one and late for their own event, the White Lives Matter demonstrators left.

If we should learn anything from this weekend in Shelbyville and Murfreesboro it’s confronting hate works.

Saturday in Shelbyville, anti-fascists confronted the planned “White Lives Matter” rally with larger numbers and a peaceful, if not mocking tone. Hundreds of counterprotesters outnumbered at least 3 to 1 the mixed bag of white supremacists, Nazi’s and League of the South members. 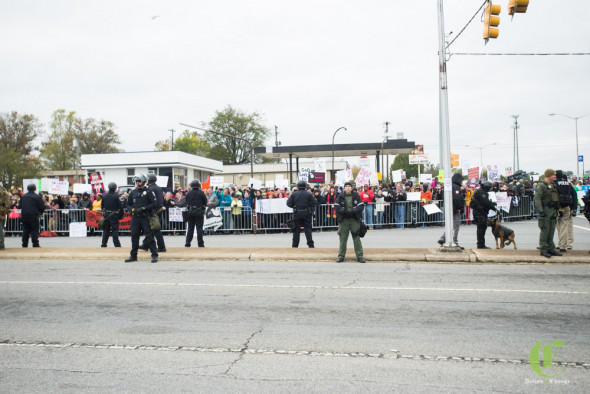 Clearly learning from the mistakes of Charlottesville, Shelbyville Police made certain to keep the two opposing sides far away from each other. Four lanes of road, a divider, metal gates and a line of riot-prepared police prevented the two sides from meeting. The security didn’t stop there though – the laundry list of items that were not allowed into the ‘free speech zones’ was long and included water bottles, backpacks.

There was also two separate metal security checkpoints that every person needed to go though, empty pockets and receive a twice over with a metal detector wand. The press were given a media area across the street from the both of the White Lives Matter event and the counterprotesters – that was the only place that media could bring tripods and backpacks. 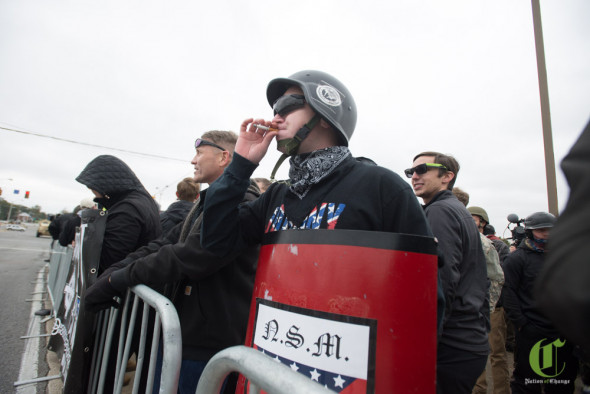 On the White Lives Matter side, helmets, metal shields, mic stands were all allowed. Some of the white supremacists were questioned on their swastika and white hate symboled necklaces, but it wasn’t because of what they represented, but because they were metal.

They were all allowed through, as far as I saw during my time watching the security lines. 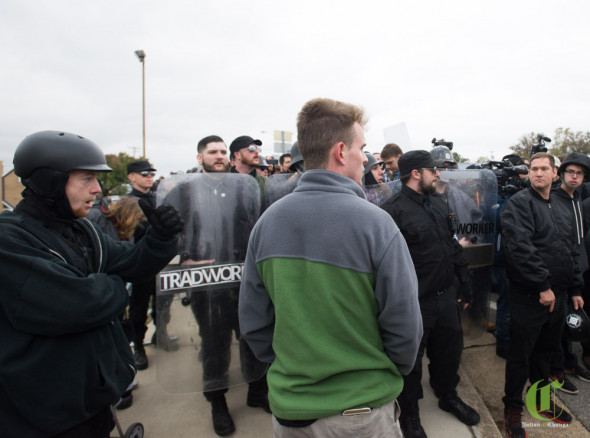 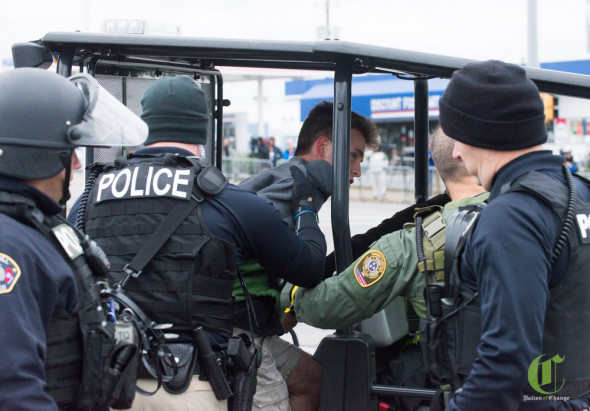 Police were called over to the WLM side once to pull a suspected counterprotester out of their designated area. Conflicting accounts from people I talked to portrayed the man as an agitator and as just someone who wasn’t “vetted” by the League of the South organizers. 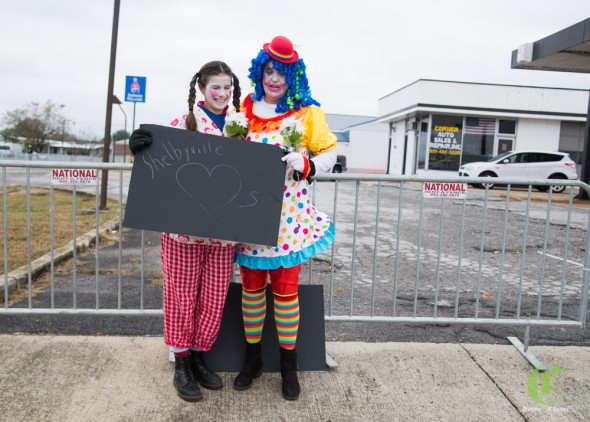 The counterprotesters, who were mostly made up of locals, used a speaker system to taunt and mock the small turnout of the WLM ralliers who were also over an hour late to their own scheduled event. While the WLM ralliers had a speaker system, they couldn’t get it to work, which allowed the other side to broadcast Martin Luther King Jr. speeches, the Cops theme song, some Beyonce and La bamba by Ritchie Valens. 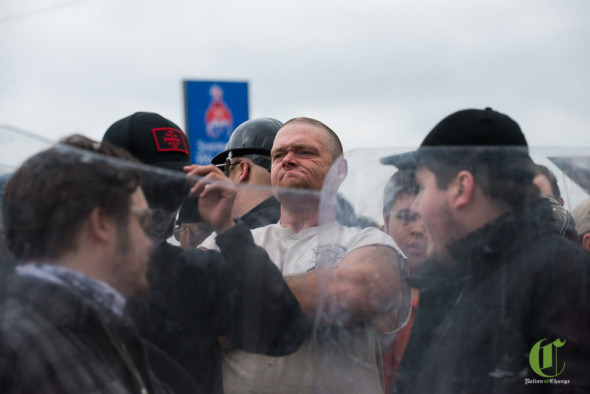 The jokes were what really made it the event – and at least on some level got to the white supremacists:

“You lost World War II. You lost the war of ideas…You are the Cleveland Browns of political ideologies.“

The League of the South member standing behind me had to admit with an awkward chuckle, “Ok… that was a good one.”

Outnumbered by more than three to one and late for their own event, White Lives Matter left for what we thought at the time would be their next rally, another well fortified event in Murfreesboro about 40mins away.

They decided to forgo what was supposed to be their larger event for a quiet picnic in a park about 45mins away. After heading to Murfreesboro and finding only a handful of White Lives Matter and League of the South members at the town center, we slowly realized that they weren’t showing. 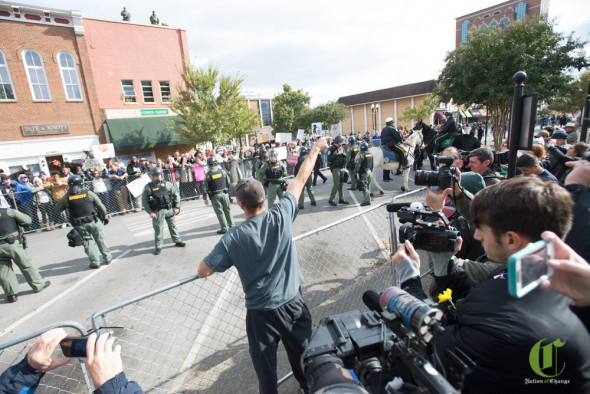 One single person attempted to take on the over one hundred counterprotesters that showed up to confront what was rumored to be thousands of white supremacists.

It ended about the same way that Shelbyville did. The dozen or so White Lives Matter folks that didn’t receive the memo about Murfreesboro being cancelled eventually did and they moved on.

We followed, and eventually made it to Henry Horton Park. After initially being prevented from getting anywhere near the Nazi picnic, we were allowed to attempt to join.

Upon arriving at the gazebo, we were confronted by a white supremacist that greeted the us with a homophobic slur “Greetings fa***ts!” in a disconcertingly jovial tone.

He lamely attempted to prevent us from entering the public space, but thankfully a member of the League of the South that we had had a chat with while waiting for food was in our eye-sight.

My colleague, Emily Molli, greeted the older man (a member of the League of the South) as the other white supremacist continued to harass us with a weird mix of racial and ethnic slurs that made no particular sense for us. That ended quickly as he was warned away with a jolting from the electric cattle prod that was at the end of the old mans cane. 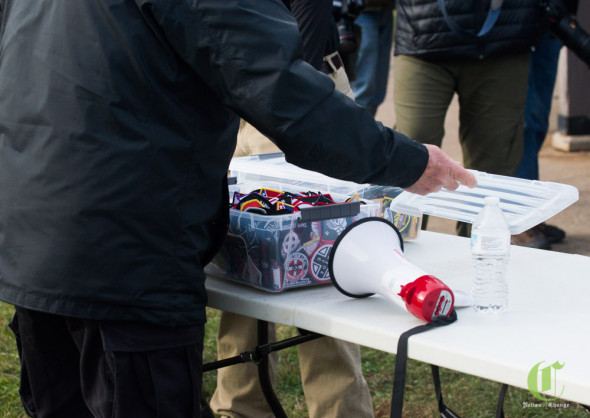 With that, the white supremacists left their roaring fire going at the park and drove away.

The media were the ants to their picnic. 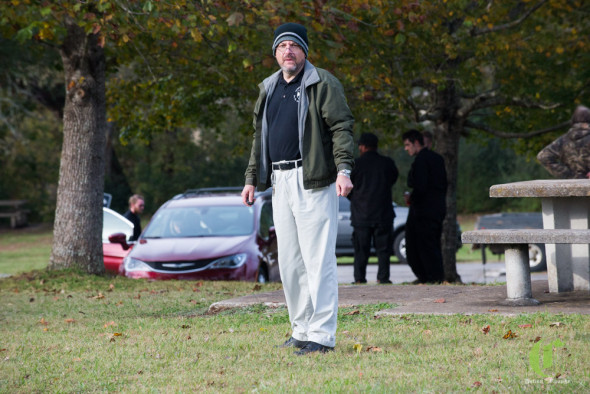