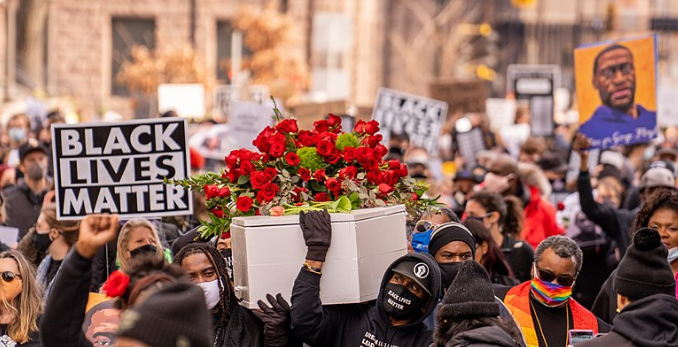 Lessons Learned From The Chauvin Trial That Relate To Palestine

Above photo: Thousands march in Minneapolis the day before the start of jury selection in the Derek Chauvin murder trial. Chad Davis, via Wikimedia Commons.

Over thirty years ago, James Baldwin was the subject of a PBS documentary The Price of the Ticket (1989) in which he reflected on what he considered a lack of progress in combatting racism in America:

“What is it that you wanted me to reconcile myself to. I was born here more than 60 years ago. I’m not going to live another 60 years. You always told me that it’s going to take time. It’s taken my father’s time, my mother’s time, my uncle’s time, my brothers’ and my sisters’ time, my nieces and my nephew’s time. How much time do you want for your progress?”

Sadly, his comment remains vital today. On April 21, 2021, a jury found Minneapolis police officer Derrick Chauvin guilty of second-degree murder, third-degree murder and second-degree manslaughter in the death of George Floyd. There has been much written regarding whether the verdict represents justice for Floyd, who died as a result of Chauvin’s knee on his neck for over nine minutes, or whether it represents something much more insidious, namely the decision of those involved to sacrifice one of their own in order to prevent the burning down of America’s cities in another round of rallies.

In the article ‘The Chauvin Trial is Dangerously Deceptive,’ Paul Street discusses the ways that media creates the illusion that there are no longer barriers to Black advancement and equality in the United States. In this case, Street writes, extended media coverage of the trial and its verdict imply that there is a “government passionately committed to social and racial justice and to the disciplining of its gendarmes when they go too far.” In reality, Street claims, “Chauvin is the sacrificial lamb for the preservation an insidious regime of racial oppression that rarely punishes its worst on-the-ground perpetrators.”

The trial of Derrick Chauvin brings to mind an earlier case in Palestine, specifically the murder of Palestinian teenager, Muhammad Abu Khdeir, whose body was later found in a nearby forest. An Israeli court eventually convicted Yosef Haim Ben David, 33, of the crime, along with two other accomplices who were given 21 years and life in prison respectively.

Lawyer for the family, Mohammad Jbara, said that the verdict was important “because we want the Israeli government and justice system to treat the Palestinians who are victims of terror acts committed by Israelis as equal to what Israel considers as Palestinian acts of terrorism towards Israelis.”

In both cases, that of Floyd and Abu Khdeir, their murderers were never shown as part of a larger framework of systemic racism in Palestine as well as Turtle Island. In the former, the incident led up to the 2014 bombing of Gaza in which the dead included 2,251 Palestinians. Concurrent with the latter, the system that produced Derick Chauvin has continued on with business as usual. As Mariame Kaba and Andrea Ritchie note, 64 people have been killed by police since the verdict was handed down.

In 2014, Aaron Turgeman asked if the murder of Mohammed Abu Khdeir might become Israel’s “Rosa Parks Moment,” a tipping point made famous for how it brought to light racism and injustice. “So glaring is the disparity in value that Israel attaches to Jewish versus non-Jewish life,” he concludes, that a “complete collapse of the Zionist narrative is at stake” in the outcome of this single horrific event.

The same in the aftermath of the Chauvin trial. As Erica Caines observes, because there has been very little class analysis, “the masses are more susceptible to being swayed against their better interests because the packaged messaging of hope and change is delivered by people, the Black petty-bourgeoisie, who look like us.” In response, she asks: “Who controls the narrative.”

In mainstream media, Zionists control the Official Story, a narrative that blames the victims for their deaths. At best, the Occupation becomes a history of “conflict,” a cycle of violence that is far too “complicated” for the average person to understand. Accordingly, for the past several nights, there has been what the Palestine Chronicle, in its live blog, calls “the Jerusalem uprising,” a response to the escalation of Israeli violence in the recent past.

What the New York Times, in its coverage, leaves out in its coverage is that the rising tension is due to decades of Occupation, not just “extremist groups” who recently roamed the city while chanting “Death to Arabs.” Just as Floyd’s murder was a tipping point, a reaction to centuries of abuse at the hands of the settler-colonial state, so the recent escalation in Jerusalem is the culmination of daily exploitation by the Zionist regime.

According to Erica Caines, Black communities were lulled into a false sense of justice by “intentional efforts to steer our people away from political education and acute comprehension of their circumstances so they may organize towards the end of all oppressive systems.”

The solution? “A prolonged people’s rebellion,” declares Paul Street, but added to that, mass uprisings combined with organizing and political education, because only by addressing the latter will there be substantial change. Indeed, “mobilization can only do so much,” writes All African People’s Revolutionary Party organizer Onyesonwu Chatoyer. “Revolutionary organization + political education remains the most consistent and reliable way to get us where we need to go.”

Understanding the wider significance of what seems to be watershed events—the Chauvin verdict, the Yosef Haim Ben David conviction, for example—is a start. Neither took place in a vacuum, but rather represented a flashpoint in a long history of state-sponsored abuse.

In “BDS: Decolonizing Palestine” (2016), Haidar Eid outlined a path towards decolonization. The rationality being the Boycott, Sanctions, Divestment movement (BDS), he explains, is that for Zionism, like any other supremacist settler-colonial ideology, the “other”— the indigenous Palestinian people—must be assimilated and subjugated without the oppressed being conscious of their subjugation.

Accordingly, BDS, along with an ongoing resistance movement, seeks to further a process of decolonization, i.e., the dismantling of “settler colonialism, apartheid, ethnic cleansing, and Israel’s genocidal policies.”

Advocates of BDS believe that only through a “culture of resistance,” a project that will “enable us to decolonize our mind of all normalization projects” will there be true freedom. In much the same vein, members of the Red Nation have recently published The Red Deal: Indigenous Action to Save our Earth (2021), a slim manifesto that calls for divestment from such areas as the police, incarceration, Child Protective Services, and much more. Another section calls for an “end to occupation everywhere” (p. 61), including Guam, Palestine, and Indigenous nations of the United States.

Speaking on Democracy Now, Melanie Yazzie, co-founder of the Red Nation and assistant professor of Native American and American Studies at the University of New Mexico, declares that “its decolonization or extinction. And the reason why we use the language of decolonization is that we draw centrally from Indigenous movements over the last couple of decades for decolonization.”

During his campaign for the presidency, Joe Biden declared that what links the United States and Israel goes beyond the exchange of weapons. It is instead the much more ephemeral notion of a “shared soul that unites our countries, generation upon generation.”

It was no coincidence, then, that an uprising in Jerusalem and in the streets of America are occurring once again in tandem; both are targeting the settler-colonial state that occasionally throws what Haidar Eid calls a “fig leaf” — the Chauvin verdict here, the Oslo Accords that Eid says “improved the conditions of oppression” there— “coexistence based on colonization and apartheid” that, Eid claims, is really no existence at all.

All of these struggles are related. The Red Deal draws from Black Lives Matter when referring to the abolition of prisons and police. Shortly after the murder of George Floyd, Palestinians painted a mural of his face on the separation wall. Looked at in this way, the Chauvin verdict wasn’t justice, but rather a “fig leaf” that ignores the many centuries of state-sponsored abuse wherever colonialism exists.

In a Facebook post, Hope Alvarado, an organizer for the Red Nation, summarizes connections between the struggles:

“When I went to Palestine, Palestinians refuse to acknowledge Israel. They wouldn’t acknowledge any of the territories nor would they acknowledge the settlers state. They would call the boundaries between the territories and segregated lines drawn by the Israeli Defense force (IDF) as ’48’ – to remind them and everyone of what happened in 1948 with the theft of palestinian lands. We all believe Palestine will be free. For these reasons I reject the settler names of U.S. occupation. I believe we will be free too.”

Shortly after the verdict, Ajamu Baraka, organizer for Black Alliance for Peace, asked:

“How do we use this moment, this ‘victory’ for the best of our political education/propaganda purposes?”

“As the Derek Chauvin verdict was being read, a 15-year-old African girl, Makiyah Bryant, was shot 4 times in the chest by police in Colombus, Ohio and killed. She was the one that called them for help.

Understand it is not cynicism that makes us reject EVERY CRUMB slid across the table to us by this system. It is LOVE. The Derek Chauvin verdict means nothing. It is not justice. It is not accountability. It is not a ‘small step’ in the right direction. It is PACIFICATION while murders continue unchecked. The killing is not going to stop until our communities are organized to stop it.

That is it and that is all.”

Add to that, the need to see connections between all the struggles that might bring about the justice that Baldwin called for many years ago.

Benay Blend earned her doctorate in American Studies from the University of New Mexico. Her scholarly works include Douglas Vakoch and Sam Mickey, Eds. (2017), “’Neither Homeland Nor Exile are Words’: ‘Situated Knowledge’ in the Works of Palestinian and Native American Writers”. She contributed this article to The Palestine Chronicle.