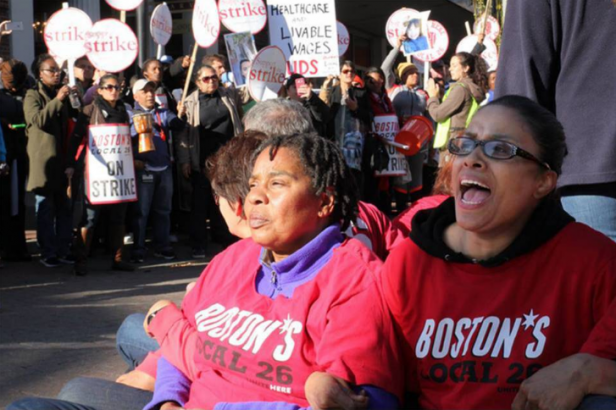 Above Photo: From workers.org

The 750 striking Harvard University Dining Service workers — cooks, dishwashers, servers and cashiers — brought multibillion- dollar Harvard University to its knees on Oct. 25, 2016. After a three-week strike, the university bosses caved, giving the members of UNITE HERE Local 26 even more than they had initially demanded.

Most importantly, all the health care takeaways the Harvard Corporation had demanded were off the table. The strike victory holds valuable lessons for the workers and oppressed in the age of global capitalism — particularly now under the Trump administration and the rise of ultra-rightist, racist elements.

Workers World contributing editor Martha Grevatt interviewed Chief Steward Ed Childs, a cook and leader in Local 26 for more than 40 years. This is the second in a series of articles based on the interviews where Childs explains how the workers won.

Well in advance of the Harvard University Dining Service strike, we knew we would need to build a solidarity coalition to take on the Harvard Corporation. We spent months laying the groundwork. (For Part 1, about strike preparations, go to tinyurl.com/z3goecw.)

Once the strike began the coalition was critical. Harvard Medical School students staged two walkouts in support of the striking HUDS workers. The Student Labor Action Movement played a big role; they organized a dinner for us on campus where faculty, administrators, deans, parents and our workers spoke. Campus environmentalists saw worker health as necessary for a healthy campus environment. The Jewish group Hillel hosted meetings and fed us, and rabbis spoke at our rallies.

The LGBTQ student group wrote a long op-ed in the campus newspaper titled “This Strike Is So Gay,” because the fight for health care is so important to their constituency. We in Local 26 have always led by example; we won the first nondiscrimination language on sexual orientation at the university in 1983. Harvard caved in to this demand after we took a strike pledge that year.

Students from the Harvard School of Public Health and the medical school were in the forefront because they took their oath as doctors seriously: to not just treat illness in society but to prevent it. How can we prevent illness and promote good health when workers on our campus cannot afford healthcare? they asked.

The coalition also brought in the custodians whose contract was almost up; they had similar issues around health insurance and were themselves threatening to strike. In fact, after the HUDS victory, their union, Service Employees Local 32 BJ’ won a good contract that kept health care intact.

Harvard Union of Clerical and Technical Workers, the largest union on campus, comprised of 4,500 workers, was poised to join forces with us earlier in the year. When Harvard got wind of that, they intimidated HUCTW and got them to ratify a new contract in May. Although HUCTW has higher fees for various health services in their new contract, management had to cancel plans to impose deductibles to avoid a clerical strike. Clerical workers walked the picket line with us.

Members and leaders from the Graduate Student Association, who were filing for union recognition, joined the strike lines.

We met with Cambridge and Boston city councils, and they both endorsed the HUDS workers’ struggle — the first time before the strike began and the second during the strike.

We knew a striking union has to create activities that promote bonding between workers. We worked with New York UNITE HERE Local 100. They, along with locals in Atlantic City, Hartford and Philadelphia, sent large delegations to one of our biggest rallies. Local 100 expects to wage similar campus campaigns, and the International union is predicting a number of strikes across the country stemming from the Harvard strike. This kind of struggle raises consciousness and encourages militancy.

The HUDS unit is the largest in Local 26. When you’re building a strike coalition, you have to be sure your union leadership — of the local and the International — is part of it. I don’t see a strike surviving without the union’s backing.

The local did not want to strike, but we knew we had no choice. so we rallied and called for the strike. Then the union leadership had to go along with us, because they couldn’t let Harvard destroy one of their stellar contracts. Losing would have had national repercussions with many contracts coming up. Hotels are becoming very difficult to organize, especially in misnamed “right to work” (for less) states, but universities are wide open.

Our group of workers in the local met often in order to steer the strike in a progressive and militant manner.

The International brought in full-time paid staff and member organizers from around the country as a support team to do things like write media releases. At first their organizers tried to undo our structure. It was a struggle to have our leaders stay in leadership — issues arose like who was going to give a speech. While we butted heads when staff tried to disempower the coalition, we worked with them. And we succeeded because we had our structure already established. In the end the union’s resources were indispensable.

Because we built the coalition the right way, we won!

Now we’re engaged in poststrike activism. We met with Islamic students and held a joint forum Feb. 4. There we discussed fighting Islamophobia as well as lessons learned on strike and where we go from here. We put both in the context of the fight against Trump and fascism. We won a huge battle, but the struggle continues every day!