Alexandra Harris on Greenpeace’s Arctic Sunrise before she and other activists were arrested in Russia. Photograph: Denis Sinyakov/Greenpeace

Alexandra Harris, one of 30 arrested during Greenpeace protest, describes her fear of ‘rotting in prison in Murmansk’ in letter

This is an edited extract of a letter sent home last week by Alexandra Harris, one of the six Britons held on piracy charges in Russia following a Greenpeace protest against oil drilling in theArctic.

It’s very cold now. It snowed last night. The blizzard blew my very poorly insulated window open and I had to sleep wearing my hat. I’m nervous about spending winter here. I have a radiator in my cell but it’s the Arctic breeze that makes the place very cold. I heard that from December Murmansk is dark for six weeks. God, I hope I’m out by then.

Not much happens on the weekends in prison. It’s definitely the worst two days of the week. At least during the week I see my lawyer and hear of news. On Thursday I finally saw a few of the letters people have sent me. It was so nice I cried. There was one from you in there. Georgie’s made me laugh as she signed off with, “Chin up”. Ha ha! I am in prison but I will try to keep my chin up.

Sundays also mean it’s revolting meatball night! Yuk! The girls laughed that I knew the food schedule already. But we got a shower today so that’s good. The shower is like a waterfall. It’s nice.

I should be going to court next week for my appeal, which is pointless because they have already been rejected. But anything to get out of my cell for the day! And if I’m lucky, I may see some of the others. 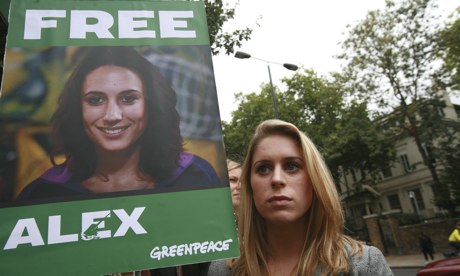 Alexandra Harris’s sister Georgie holds a placard calling for her release outside the Russian embassy in London. Photograph: John Cobb/Greenpeace

I’m worried about what’s going to happen. I have moments of feeling panicky, but then I try to tell myself that there’s nothing I can do from in here and what will be will be so it’s pointless worrying. But it’s hard. Surely my future isn’t rotting in prison in Murmansk?! Well, I really hope it isn’t.

Being in prison is like slowly dying. You literally wish your life away and mark off the days. It’s such a waste of two months and I really hope it’s no longer. Saying that, I am getting used to it. I’m doing a bit of yoga. I find it hard to meditate, though – too many worries on my mind as I’m sure you can understand. The music channel helps a lot. “I Will Survive” is played every night so Camila [Speziale, an Argentinian activist also in detention] and I tap on the wall in beat with the song. Speaking to the girls every day really helps too. We still manage to have a giggle, which is quite good under the circumstances. We all received this metal device to heat water – for days I thought it was curling tongs. When I complained to the girls that the support team could have sent me something more practical than curling tongs, they laughed so much.

The bed is not getting any easier. I’m looking forward to a massage when I get out.

I’m a different person now; stronger. I cry less, which is a good thing. And I’m so appreciative of life. I will not take anything for granted now.

I love you, Alex xxxx