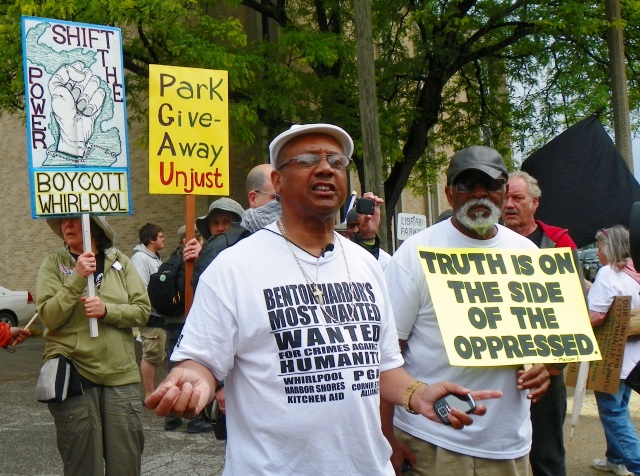 Benton Harbor, MI – Rev. Edward Pinkney is a political prisoner in Michigan. He has been an outspoken, effective activist in Benton Harbor, MI for decades. The court has consistently tried to silence him. In 2012, he was even jailed for a time because he quoted Deuteronomy in a letter-to-the-editor!

Rev. Pinkney continues to rage against the criminal justice system, the illegal takeover by Whirlpool Corporation in his city, and mass incarceration even while he is incarcerated himself. He speaks weekly on five radio broadcasts around the country including those in New York City, Washington, D.C., and Chicago.

He has been incarcerated since December 2014 and his appeal was filed on July 6, 2015. He has been through a horrendous trial, a hearing in February and in April 2015. The ACLU-MI has been involved with submission of amicus briefs and has appeared before the Michigan judge, but always Pinkney’s been denied bond pending appeal as well as simple justice as Rev. Pinkney committed no crime and there was no evidence at all to prove that he did.

As activists that strongly support Rev. Pinkney, we ask that you publish his letter that appears below:

We Must Stand Together and Demand Justice

My name is Reverend Edward Pinkney. I am at Lakeland Correctional Facility, otherwise known as a prison, in Coldwater, Michigan. I am a victim of racial injustice and over-reaching corporate power in Berrien County, Michigan. I am an internationally recognized activist who acts and fights for justice for all, and I am the leader of the Black Autonomy Network Community Organization (BANCO).

I was sentenced to 30 months to ten years. This is a death sentence for a 66-year-old man. I was accused of a crime I did not commit. Because I exercised my democratic right to petition to recall the Benton Harbor Mayor James Hightower, who supports the Whirlpool Corporation and not the residents of Benton Harbor, I was charged with five felony counts of changing dates on petitions!

While I was out-of-town celebrating my wife’s birthday on April 25, 2014 the Benton Harbor police blocked my street with its military trucks and sent in the Special Weapons and Tactics (SWAT) team to arrest me on these trumped-up charges. I turned myself in the next day, accompanied by my attorney, and a Jim Crow circus began.

There was absolutely no evidence against me and nothing was presented at the trial (held in July) that would implicate me of any wrongdoing. There was no direct or circumstantial evidence, no eyewitness, no confession, and nothing was presented at trial, and yet an all-White jury, motivated by something other than the truth, found me guilty, but I am not guilty of any crime.

Many supporters believe that I am being punished by the criminal Berrien County justice system and local authorities for opposing the Whirlpool Corporation’s plan to expand its hostile land takeover and to gentrify Benton Harbor to turn the area into a multi-million dollar golf resort and playground for tourists and the PGA elitists.

Whirlpool is a multi-billion dollar global appliance manufacturing corporation with its corporate headquarters in Benton Harbor. Whirlpool, founded by long-time Michigan Rep. John Upton’s grandfather, has spent the past decade outsourcing Americans’ jobs (including hundreds from Benton Harbor), grabbing public land illegally (a 22-acre park plus the Warren dunes along Lake Michigan that J.N. and Carrie Klock gave to the City of Benton Harbor for the children in memory of their only child who died in infancy), and corrupting the county officials (judges, attorneys, public officials, and law enforcement) to ensure Whirlpool’s success in owning everything in sight: people, land, businesses, real estate, even churches.

For my active opposition and outspokenness, I have been unduly punished by the corrupt Berrien County court system. The court system has stolen time from me. I am paying a debt to society, which I do not owe, with my life, my family life, and my Community.

I am entitled to a directed verdict of “not guilty” based on:

Under MRE 404(b) and the Constitution, there was no proper basis in the case to admit evidence of completely legal political activity based on an allegation that it showed motivation to participate in other activity that was illegal. Therefore, Prosecutor Sepic’s misconduct violated my constitutional right to a fair trial.

Berrien County Judge Sterling Schrock ignored the law and evidence during my trial. Judge Schrock and Prosecutor Sepic worked together as a team against me. Both had un-revealed, deeply held prejudices against Black people. Judge Schrock and Prosecutor Sepic both took an OATH – a solemn declaration accompanied by a swearing to GOD that they promise to perform the duties of office in good faith. Therefore, I conclude that both men lied under oath.

The jury itself was a rogue jury. We have evidence that some of the jurists knew each other professionally and personally, but they did not reveal their relationships. Few of the perspective jurors were Black, and all chosen to serve were White. This jury ignored the law and evidence in reaching a capricious verdict. This was a jury that based its verdict on prejudice as it heard no evidence against me. The jury’s verdict was not based on a desire to achieve a just, fair or moral outcome.

The Berrien County criminal justice system hypocrisy has no limits.  As long as we allow the court system to fill the privately-run prisons to meet the quota demands of for-profit companies and until we hold judges, prosecutors, and jurors to a higher standard-a standard of truth and honesty-the system will continue to need a complete overhaul.

It is the constitutional duty for every single American to hold all elected officials, judges, prosecutors and law-enforcement accountable for their actions of wrongdoing. All corrupt officials must be tried and imprisoned for their wrongdoing.

However, the system could not get away with the corruption if the news media would expose the travesties and injustices wrought onto individuals by the system. In this way, the news media work hand-in-hand against the people. Too often, the media’s written articles and news reports favor judges and prosecutors just as it did in Nazi, Germany. When the news media sits back and does nothing, innocent people, like myself, will continue to be convicted without evidence. The media has a duty to the people to be honest.

I, Rev. Edward Pinkney, am sitting in prison, paying a debt to society that I do not owe. I was tried for a crime created by evil, wicked corrupt County officials who stole the election from the residents and sent me to prison for a crime I did not commit so that Whirlpool Corporation can “revitalize” Benton Harbor as it gentrifies the city to make way for only the wealthy, the tourists, the PGA golfers to enjoy the beauty of the white sands of Lake Michigan and play golf in the children’s Jean Klock Park.

The Berrien County justice system is operating a criminal enterprise. We citizens must stand together and demand the news media print the truth, practice real investigative reporting, and bring down the corrupt criminal justice system, not just in Berrien County, but all across America.