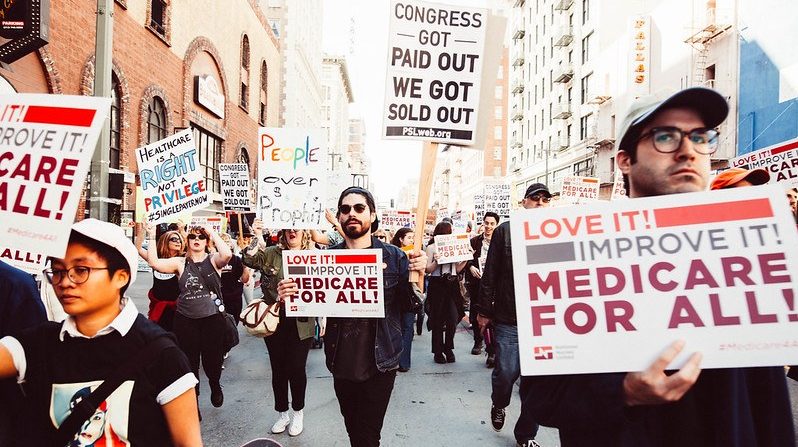 Liberals And Congress Retreat Rather Than Fight For Medicare For All

The last few years have seen “Medicare for All” go from a pipedream to a household phrase.

Yet now, the movement is floundering with lack of clear leadership, with self-appointed spokespeople in Congress and activist groups pushing a puzzling state-based approach.

Decades of a movement based on educating the public about the merits of a national health insurance program (like Canada and many other developed countries) achieved a remarkable feat: the majority of Americans now favor  Medicare for All. At a Bernie Sanders healthcare town hall last year, Rep. Pramila Jayapal glibly stated that the problem to enacting Medicare for All was not more education of the public, but a question of “political will” necessary to actually push it forward.

Yet, despite a pandemic, which has laid bare the inequalities and deficiencies of our healthcare system coupled with Democrat majorities in three branches of government, Medicare for All seems off the table. Where is the political will?

Public support remains high, millions are without coverage or underinsured yet there’s no effort to make single payer a national issue by Congressional Democrats. Much has to do with the influence of the health industry within the Democratic party. Insurance companies, PHARMA, and hospitals gave more to the Democrats ($286.5 million) than to Republicans ($165 million). Then-candidate Biden collected $60.8 million compared to Trump’s $30.4 million.

Pramilia Jayapal, the primary Congressional sponsor of the Medicare for All Act of 2021, gives President Biden an “A” on his first 100 days in office even as he continues his opposition to Medicare for All, pushes $35 billion of temporary taxpayer COBRA subsidies, and celebrates the ACA anniversary while tens of millions are un or underinsured. There seems to be no need to push Biden left since Congresswoman Ocasio-Cortez says he’s “exceeded expectations.” And rather than forcing a Congressional vote to help publicize and gain public support, Congresswoman Jayapal says such a move would “end our movement.”

Dovetailing nicely with the silence from all 115 Congressional cosponsors of the Medicare for All Act is the shift to state-based single payer as the way to overcome the political roadblocks and lack of political will in Congress. Magically, they believe a single state will be able to overcome this battlefield now owned by the insurance industry. The same progressives who told us that members of the House progressive caucus had no leverage to push Medicare for All forward via a floor vote are now telling us that a single state can not only overcome the power of the insurance industry to pass state based single payer but also spark a sea change of state-based systems across the country.

Depending on whom you ask, the role of state-based single-payer in the movement seems to have different purposes. Some advocates in California have insisted for years that it was a sure bet with governor Gavin Newsom. Some say a state-by-state approach will pave the way for a national approach. Others subscribing to the deplorables argument, insist that red states will never accept single payer, and insist it’s up to the noble blue states to pass it on their own. Others recognize the obvious flaws in the state-by-state approach, laid out best by Kay Tillow and Ana Malinow in Common Dreams, but insist the state approach is still a valid way to “organize.”

With no viable path forward, groups like DSA and Justice Democrats insist that the political pressure is just not there for national single payer. But the failure to articulate a real vision has begun to lead to a crisis of credibility for Medicare for All activists everywhere. With flip-flopping between state and national approaches and Congressional Representatives who campaign on and regularly tweet about the need for Medicare for All, but have no clear path to push it forward, how can activists maintain credibility when attempting to “organize”? And what does “organizing” actually mean?

For the activist organizations trying to move the issue forward, organizing is done through a series of top-down campaigns — usually an election or pushing a specific piece of legislation. Demanding anything of a Congressional Representative short of cosponsoring a bill is not considered. Relationships and “access” with friendly members of Congress are deeply prioritized. That’s why now, with control of all three Houses, Democrats were quick to lower expectations to these activist groups and put Medicare for All off the table. Meanwhile, state single payer presents itself as a way for activists to continue to talk to people about Medicare for All without ever demanding anything from Congress.

But rather than be swayed into campaigning for state-based single payer, creating confusion and roadblocks to ever achieving a national program, activists ought to ask what more they can do to bring energy into a national movement necessary to actually win. Public hearings and town halls specifically around National Single Payer in a congressional district can both continue to educate and grow public support while pressuring the local representative to take a public stance in support of the movement. There are 115 Democrats in Congress who claim to support Medicare for All — each ought to be publicly encouraged by activists to hold hearings in their congressional districts and around the country. Energizing actions for a national program can inspire and lead to coordinated actions across the country. Instead, if activists in New York, California, or Washington continue to abandon the national movement for the failed state approach, the movement will suffer.

The legislative roadblocks to passing Medicare for All lie both in the lack of support among Republicans in Congress and the lack of leadership from those in Congress who claim to support it. Who are the champions for National Single Payer Medicare for All when its “leaders” have been compromised by their embrace of state-based plans and ties to the Democratic establishment at a time when the failures of our healthcare system are so obvious? Insider political horse trading and lobbying can not win. A mass national movement is necessary and possible: one that focuses the organizing energy towards mobilizing the strong public support for Medicare for All and uses this energy as the foundation for future organizing. A principled independent movement that will unite supporters, elected officials at all levels, supportive labor groups and allies into a powerful force is the only one strong enough to change the political dynamic and win.