Ever since Edward Snowden helped reveal the true extent of the National Security Agency’s (NSA) massive spying program, U.S. politicians have attempted to “fix” the program’s gross violations of the Fourth Amendment with legislation. While some legislative efforts were “fake fixes,” others were well-meaning but have fallen short, as legislators still lack key information regarding how the government interprets and uses Section 702 of the Foreign Intelligence Surveillance Act (FISA) and Section 215 of the Patriot Act to legally justify its dragnet collection of citizen phone records and other information.

Indeed, over the past four years, Congress has been stonewalled by the NSA in its attempts to learn more about the program. The NSA has repeatedly refused even to estimate how many Americans are spied on by the agency’s most invasive programs and has even refused to reveal whether it spies on members of Congress or other elected officials in the United States.

Despite the NSA’s failure to cooperate, Congress is again attempting to rein in the agency’s internet surveillance program, as its key legislative underpinning is set to expire by year’s end. The newly introduced bill, titled the USA Liberty Act, seeks to address the worst of the program’s abuses while also reauthorizing some aspects of the program to continue for another six years. The bill is sponsored in the U.S. House by Bob Goodlatte (R-VA) and co-sponsored by John Conyers (D-MI), Sheila Jackson Lee (D-TX) and Jim Sensenbrenner (R-WI), among others.

However, like some of its predecessors, the act is largely a “fake fix,” as meaningful and positive changes offered in the bill’s first draft are few and far between. According to the Electronic Frontier Foundation, the bill’s retention of the program’s “sunset” — meaning that Congress must again review the issue in another six years – is a positive sign. This is because it avoids the permanent reauthorization of the program, which would make the program much more difficult to monitor and curb in the future.

The current draft also codifies the end of “about surveillance” — a controversial practice whereby the communications of non-surveillance targets (i.e., innocent people) were included in government databases.

However, the change will fail to prevent the NSA’s dragnet collection of the communications of innocent Americans – only making minor changes to how they are stored. Given that the NSA voluntarily halted “about” surveillance in April, the codification has little immediate practical impact, while failing to preclude a future resumption of such broad-sweep data collection, should the NSA change its mind. 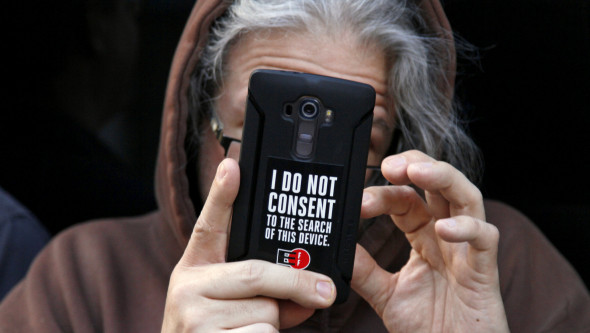 A man holds up his phone during a rally in support of data privacy outside the Apple store Tuesday, Feb. 23, 2016, in San Francisco. (AP/Eric Risberg)

Compared to its limited and largely cosmetic fixes to the NSA spying program, what the USA Liberty Act leaves unfixed is much more significant. For instance, the bill in its current state would leave whistleblowers unprotected, despite the fact that the testimony of NSA whistleblowers was the only means by which the public learned about the true extent of NSA surveillance.

Though the bill does extend some protections to whistleblowers, it applies only to those who go through the “proper” channels and engage in the “lawful disclosure” of abuses. Numerous whistleblowers, including Snowden, pursued these very channels without success. Whistleblowers who speak to the media or to privacy advocacy organizations would not benefit from the Liberty Act’s proposed protections.

The bill also falls short in attempting to limit whom the NSA can and cannot target. As currently written, the bill would merely ask the NSA to exercise “due diligence in determining whether a person targeted is a non-United States person reasonably believed to be located outside of the United States,” requiring agents to consider the “totality of the circumstances” in reaching a conclusion. Yet, given that much of NSA illegal surveillance occurs through “incidental collection” — i.e., the “unintentional” collection of American communications while ostensibly targeting a non-American abroad – vaguely asking the NSA to exercise “due diligence” is a safe bet to have minimal effect on the agency’s current practices.

Most troubling, however, is the bill’s failure to fix the NSA’s violation of the Fourth Amendment rights of everyday Americans. The bill would still allow “government agents” – including agents from the FBI and CIA as well as local police departments – to use the NSA database as they please without court oversight, only requiring that a “government agent” conducting a query looking for evidence of a known crime seek a warrant from the Department of Justice (DOJ).

However, no other searches — such as when local police departments search to see if a crime occurred at all or when spy agencies search for foreign intelligence — would require the oversight of either the DOJ or a court. Searches for metadata – such as the time, sender and recipient of online communications – would also not require court oversight. If anything, this “fix” would maintain the program’s status quo, only giving the DOJ – which has also aggressively defended the dragnet spy program – more of a role in determining what constitutes probable cause.

Though the Liberty Act,  if passed in its current form, will keep the NSA spying program somewhat open to congressional oversight, it will fail to rein in the program’s most troubling aspects. Thus it will essentially prove a boon to U.S. intelligence agencies while perpetuating an alarming disregard for the constitutional rights of Americans.